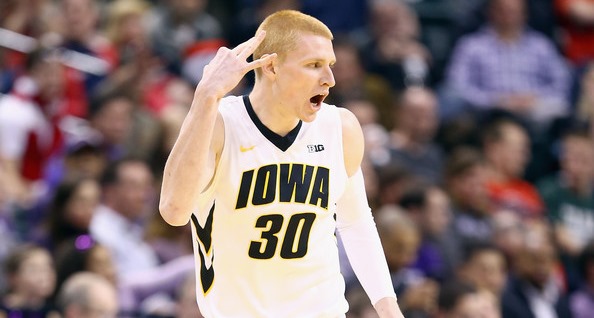 Big Ten players and coaches took to Chicago last week to face the media for the first time this season and answer questions about expectations, offseason development and more. With the start of the season less than a month away, we ran through the conference to look at one major question facing all 14 teams.

Iowa: Can the Hawkeyes bounce back from last year’s disappointing finish without Devyn Marble?

In mid-February, Fran McCaffery appeared to be on the verge of his big breakthrough in Iowa City. The Hawkeyes were 19-6 and looked like a team headed for a top-5 NCAA tournament seed. Then Iowa finished the season losing seven of its final eight games, ending the season with a NCAA tournament play-in defeat to Tennessee.

It’s going to be tough to shake the bitter taste of last year’s finish and it’ll be even tougher without Roy Devyn Marble. Despite the fact that Iowa was the deepest team in the Big Ten last season, it was still as reliant on one player as anyone in the conference other than Nebraska. Now the question is who will replace his production? McCaffery gave Aaron White the nod at Big Ten Media Day.

While White is a great player, he’s not the best fit to replace Marble’s production. White is experienced and efficient, arguably the most underrated player in the conference, but he’s also at his best when he’s off of other people rather than dominating the ball and creating offense. White excels running the lanes in transition and attacking the basket off of straight line drives and cuts, things that are much easy with a star facilitator.

“The other part of it I think is harder to replace because we relied on (Marble) so much,” McCaffery admitted. “Not only in terms of those shots you talked about but also as a point guard at times, we posted him up, we used him in a lot of ways.  Somebody else is going to have to step up and score those points and take those shots.”

McCaffery went on to single out players like Josh Oglesby, Peter Jok, Mike Gesell and Jarrod Uthoff as candidates – but there are a lot more possibilities than natural answers. There’s nothing that says a more balanced approach can’t be more effective, but finding the right mix will be critical for the 2014-15 Hawkeyes.

Illinois: Could Illinois be better with a new point guard?

You never want to say that losing a player to a season-ending injury is a positive, but the loss of Tracy Abrams could help accelerate Illinois’ offensive growth. The Illini had the second worst offense in the league last season with Abrams at the helm. It’s unfair to heap all of the blame on the 6-foot-2 guard, but he used a quarter of Illinois’ offensive possessions despite being one of the least efficient starters in the conference. He shot just 36% on twos and 27% on threes on the season and wasn’t any better in Big Ten play.

“Well, obviously we don’t want to lose Tracy.  For us we’re going to be fine,” John Groce explained at Media Day. “We’ve got Ahmad Starks who’s been terrific on the offensive end.  He packs a big‑time punch.”

Starks is a 5-foot-9 transfer from Oregon State who sat out last season due to NCAA transfer regulations and while he’s disappointed to see Abrams go down with injury, he also has a tremendous opportunity. Starks was an above-average three-point shooter at Oregon State, but he’ll need to improve his ability to distribute and finish around the basket.

Indiana: Can the Hoosiers cure the turnover bug – again

Throughout Tom Crean’s first few years at Indiana, the Hoosiers turned the ball over as often as anyone in the country. But then the Hoosiers were suddenly so talented that the turnovers simply didn’t matter any more. Last year was a reminder that after two successful seasons, the turnover woes were never really solved – they were only masked by a roster that featured Victor Oladipo and Cody Zeller.

Indiana still hasn’t ranked better than 100th nationally or seventh in the Big Ten in turnover rate under Tom Crean. Even when the Hoosiers won the conference and had the league’s best offense, only Minnesota turned the ball over more often. Last year was always going to be a transition year, but turnovers reared their ugly head once again. Indiana gave the ball away on 21.9% of its offensive possessions — more than once every five trips down the floor.

Indiana was undeniably young last season, but it’s time to expect more. Yogi Ferrell is a Preseason All-Big Ten selection and the consensus best point guard in the league. He’s won the conference, he’s played in big games and it’s time for him to control the Indiana offense and fix the turnover woes once and for all. Having McDonald’s All-American guard James Blackmon Jr. next to him in the backcourt this season won’t hurt either.

Maryland: Can the Terps overcome a tumultuous summer?

Mark Turgeon’s program experienced a rocky summer that featured all of the wrong sort of headlines. Seth Allen, Shaquille Cleare, Nick Faust, Roddy Peters, Charles Mitchell and Trayvon Reed all transferred away from Maryland or were dismissed.

It seems like there are enough pieces to compete, but Turgeon is going to need to figure out how to fit things together quickly while also learning the ropes in a new conference.

Purdue has serious questions to answer on defense and in the backcourt after the loss of Terone and Ronnie Johnson, but AJ Hammons is the one player that has the ability to elevate the Boilermakers out of mediocrity.

Hammons is a legit 7-feet tall, he rebounds, he can score on the low-block and he blocks shots as well as any big man in the country. But he’s still a long way from being the sort of All-Big Ten player that he’s capable of. All eyes will be on Hammons, but Matt Painter might be running out of time if the 7-footer doesn’t finally deliver on a consistent basis.

DJ Newbill transferred to Penn State to play alongside Nittany Lion point guard Tim Frazier. Instead he spent his first season trying to learn the point guard position on the fly after Frazier ruptured his Achilles.  Newbill proved he had the ability to distribute the ball, but he struggled with turnovers that year. Last year with Frazier back in the mix, Newbill was able to slide back to his natural off-guard position. He responded by scoring more efficiently and cutting down his turnovers.

Northwestern: Can the Wildcats score?

Northwestern had a historically bad Big Ten offense last season, scoring just .88 points per possession in Big Ten games, and will have to figure out a way to show improvement without its best offensive player from last season, Drew Crawford.

“I don’t want to put that on any one player.  I think as a whole, I think we have more fire power offensively, not just with some of the young guys we brought in, but also the development in some of our returning guys,” Chris Collins explained. “ I felt last year we were pretty predictable in terms of what we were going to play through Drew, and we had Demps and Cobb, and those were kind of the three guys.  And if teams were able to take one or two of those guys out, we would really have a hard time scoring.”

Among returning players, Alex Olah, Tre Demps and Jershon Cobb are the likely candidates to shoulder the load. Olah has a legitimate low-post game, Demps was streaky but had some big moments while Cobb should be healthy and eligible. But the key to Northwestern’s season might be top-100 freshman Vic Law. There haven’t been many top-100 players deciding to spend their careers in Evanston recently and the 6-foot-7 wing should provide a much needed injection of talent.

Rutgers: Can Rutgers defend in the Big Ten?

Rutgers allowed 1.11 points per possession in AAC play last season and was ranked 201st nationally in adjusted defensive efficiency according to Ken Pomeroy. While Rutgers’ defense fell in the middle of the pack in the AAC, it would have been the worst defense in the Big Ten by as wide of a margin as separated 12th from sixth.

Rutgers returns two very talented players in Kadeem Jack and Myles Mack, but it’s hard to imagine a dramatic defensive improvement given the step up in competition from the AAC to the Big Ten.