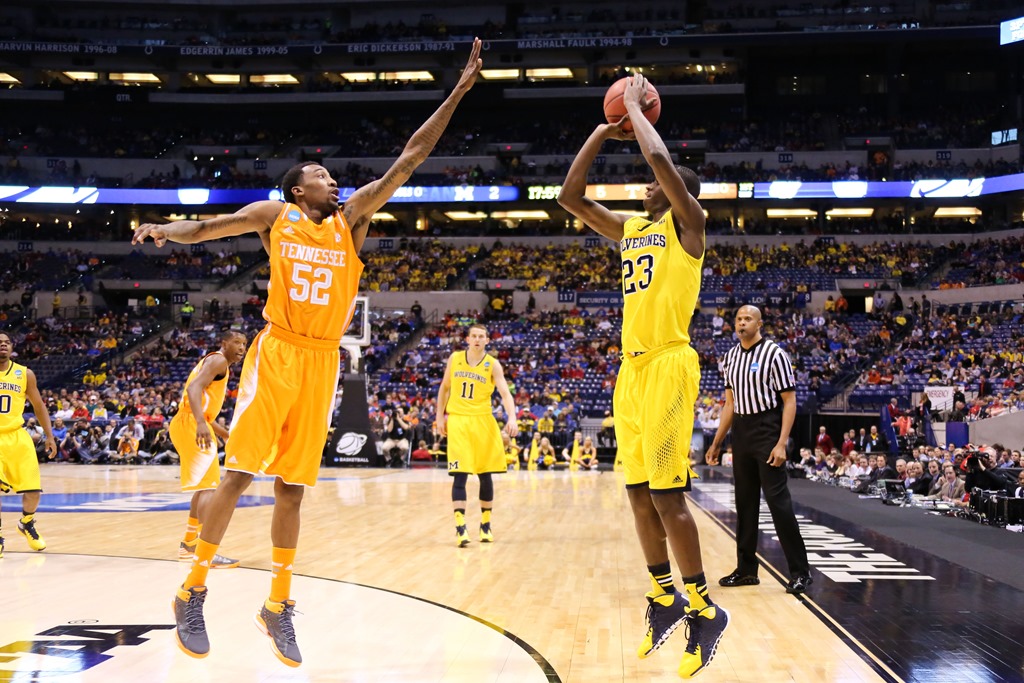 The moment was emblematic of Michigan’s run to the Big Ten title last season.

With the seconds ticking down in the first half of the Wolverines’ game against Michigan State on February 23rd, Caris LeVert caught a pass and immediately elevated for a three from his sweet spot, the left corner. As the ball arced toward the hoop, the guard turned and began sprinting back to the locker room.

He didn’t need to keep watching to know the shot was going to drop.

LeVert finished with 23 points that afternoon as part of a breakout sophomore campaign that saw his transformation into an elusive ballhandler who was deadly from three.

The lanky guard was one of the best players in the conference last season, but John Beilein and the rest of the Michigan coaching staff believe there’s substantial room for improvement this winter.

While LeVert averaged 12.9 points per game in 2013-14, was Michigan’s best perimeter defender, and made an impressive 41% of his threes, he left plenty to be desired in his tepid success from mid-range and average half-court distribution. The latter has been stressed most by Michigan’s coaches during the offseason.

Last year, LeVert’s assist-to-turnover ratio was just 1.4:1 in half-court offense compared to 3.6:1 in transition, according to Synergy Spots. Turnovers were never a major concern for LeVert considering how often he handled the ball, but his ability to find teammates paled in comparison to Nik Stauskas and his wizardry of the pick-and-roll.

Because the Wolverines are without some of last year’s biggest weapons this season, it’s even more crucial that LeVert continue to expand his repertoire.

“One of the things he’s been studying is how to make easier decisions once he does get two feet in the paint,” assistant LaVall Jordan said earlier this month.

Beilein asserted at last Thursday’s Big Ten Media Day that the “slippery quick” guard shouldn’t have as many issues feeding his teammates this season.

“What’s added is that he can see the floor,” the coach said. “At 6-foot-7, you can look over everybody, too. That’s really an advantage.

“When [Spike Albrecht or Derrick Walton] get in there, we call it ‘Pin the Tail on the Donkey.’ …  But when you’re taller than everybody, you can really see. So, that has really helped him.”

Last year LeVert usually shot a three or slithered his way to the rim. While he was great in both areas, he often struggled to establish a rhythm with his in-between game.

Surgery to repair a stress fracture kept LeVert sidelined for 11 weeks during the summer, but the junior said bettering his shooting off the dribble has been one of his biggest priorities since being cleared to return. His teammates have noticed the change.

“He’s playing really, really well right now shooting the ball,” Albrecht said. “He has a lot of confidence in himself. We’re going to need him to have a big year for us.”

LeVert has excelled in the spotlight before. Take last year’s game at Duke, for instance, when he almost single-handedly kept the contest competitive with 20 second-half points.

Mike Krzyzewski called that performance “terrific.” And it wasn’t even LeVert’s best game of the season.

A year later, the junior has improved his upper-body strength, and, if his teammates and coaches can be believed, addressed some of last year’s biggest struggles.

And that has the conference on high alert.