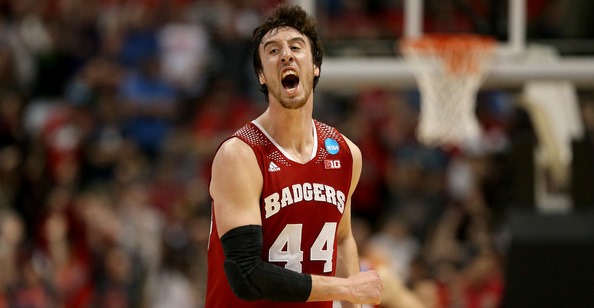 Big Ten players and coaches took to Chicago last week to face the media for the first time this season and answer questions about expectations, offseason development and more. With the start of the season less than a month away, we ran through the conference to look at one major question facing all 14 teams. Previously: Part 1

Wisconsin: Can the Badgers handle expectations?

And if there’s ever a program that won’t be affected by lofty preseason expectations its Bo Ryan’s.

“Well, it really doesn’t affect when we’re doing our transition defensive drills,” Bo Ryan quipped from the podium in Chicago. “I don’t think my guys are thinking about (expectations).  Our guys live in the moment, or at least we’re trying to‑‑ it appears that way.  They’re trying to get better.”

People generally question a team’s ability to handle expectations when they don’t know what else to criticize them for and the Badgers fit that mantra. They have the league’s best big man, best NBA Draft prospect, an experienced point guard and all of the right role players. It’s hard to argue that the Badgers don’t have a legitimate shot of winning the league and competing for a trip back to the Final Four.

Ohio State: Are the freshmen ready to go?

Even with the loss of Aaron Craft, there’s no use questioning Thad Matta’s defense this season. The Buckeyes haven’t ranked worse than 3rd in the conference in defensive efficiency since 2009 and still have the conference’s best pick pocket Shannon Scott along with a stable of defensive big men.

The bigger question is whether Matta can fix his offense, which took a radical step backward last season. Matta’s returning pieces all have plenty of experience, but none are known for their offense and with the loss of LaQuinton Ross they will need some help. In a perfect world, they’ll be supplemented by talented scoring options from Ohio State’s incoming class.McDonalds All-American D’Angelo Russell will look to the lead that charge.

“All I can say right now is I’m very pleased with how (Russell is) playing in practice, the strides he’s making,” Matta said last week. “He’s doing a great job of kind of taking the court over every time he steps on the court.  How does that factor into once we start playing games, the lights are on? He’s going to have some ups and downs, but I like his demeanor.  I like the things that he can do on the court, and we’ve got to keep coaching him and keep him as healthy as we can.”

Keita Bates-Diop and Jae’Sean Tate should complement Russell nicely to provide a solid collection of wing talent for Matta to mold, but they’re going to have to score effectively to bolster the Buckeye offense.

Branden Dawson has always been great at what he does best — rebound, defend, finish and rebound some more — but he’s never had to do more than that for Tom Izzo. Izzo has always had players around him that could pick up the heavy-lifting offensively and let Dawson find his niche.

Denzel Valentine and Travis Trice will pick up plenty of slack, but after losing their big three of Gary Harris, Adreian Payne and Keith Appling the Spartans will need Dawson to reach his potential as a senior.

“Dawson being a big key this year,” Tom Izzo said at Big Ten Media Day. “Does he take another step up, does he average the 15, 16 points, eight, nine rebounds that he did the last six, seven games of the season once he got back?  If he does that, I think this team could progress greatly here in the months to come.”

Dawson is likely going to be the best rebounder in the Big Ten, but the bigger question is how much can he improve on the offensive end of the floor. Dawson hasn’t made a three-point shot (0-9) during his three-year career and his ability to expand his offensive game will be key to both his, and Michigan State’s, future.

Nebraska: Can Terran Petteway get some help?

Terran Petteway hit as many big shots as anyone in the conference last season, but he needed to take a whole lot of them to reach that point. Petteway used more possessions than anyone in the league by a wide-margin and for all of his brilliance, he still wasn’t a very efficient player.

That recipe of relying entirely on Petteway led Nebraska to 11-7 last season, but the Huskers also overachieved. Nebraska outscored conference foes by just .02 points per possession despite playing the league’s second easiest schedule. The Nebraska defense was second best in the league, but the offense was ranked just 10th.

“Once we started playing very solid defense and became a good defensive rebounding team, we became a good team but not until,” Miles explained at Big Ten Media Day. “We were still pretty off on offense and as practice has progressed, I think we’ve continued that direction.  If you want to come Lincoln and see missed shots and stuff like that, we’re right there, baby.  You can go over to gate 25 afterwards and get something to eat. But it’s just one of those things that‑‑ defense has got to be our calling card.”

Miles is correct that defense is critical to Nebraska’s success, but a better offense will certainly help. Miles has two great options in Walter Pitchford, best pick-and-pop player in the conference not named Kaminsky, and Shavon Shields, who was terrific down the stretch last season.

Michigan has been the class of the Big Ten over the past three seasons, but John Beilein will have one of his most difficult coaching seasons in quite some time. The Wolverines probably won’t have the country’s best offense for the third consecutive season, but more importantly they’ll be breaking in a frontcourt that hasn’t played a college game. Jordan Morgan was never the most glamorous player, but the Wolverines might start to realize just how important he was.

Redshirt freshman Mark Donnal and true freshman Ricky Doyle will have to learn quickly to provide a competent supplement to Michigan’s talented backcourt featuring Caris LeVert, Zak Irvin and Derrick Walton. 6-foot-9 freshman DJ Wilson could also factor into the mix as could 6-foot-7 senior Max Bielfeldt. The Wolverines’ perimeter-oriented offense has never been dependent on its bigs, but will certainly miss Jordan Morgan’s consistency and the potential of Mitch McGary’s versatility.

Minnesota: Is this the year we see Richard Pitino’s real defense?

Minnesota seems to have racked up as many NIT victories as anyone in the Big Ten in recent seasons and last year was no exception. The Gophers cruised through the NIT to end Richard Pitino’s first season in Minneapolis on a high-note, but expectations will be higher this season. The Gophers return their starting backcourt of Deandre Mathieu and Andre Hollins and are a team that many feel can compete in the top-half of the league.

If the Gophers want to do that, they’ll have to fix their defense. Minnesota allowed a league-worst 1.08 points per possession in Big Ten play last season.

“I think the difference will be the defense more so than the offense,” Pitino said in Chicago. “You know, my first year at FIU we were top ten in the country in steals.  We certainly were not that last year.  I think that number will go up, and hopefully we can create more offense from our defense.”

While the Gophers did finish Big Ten play ranked 3rd in forced steals rate, they were only 8th in defensive turnover rate. During Pitino’s first season at FIU, the Gophers ranked 48th nationally in tempo and forced turnovers on 25.6% of their opponents possessions. The Gophers were unable to come close to that last season, forcing turnovers on just 18.7% of opponent possessions.

The Big Ten is notorious for having teams that are well-coached and value the basketball, but if Minnesota is going to have a breakout year it will have to come closer to executing Pitino’s defensive system.