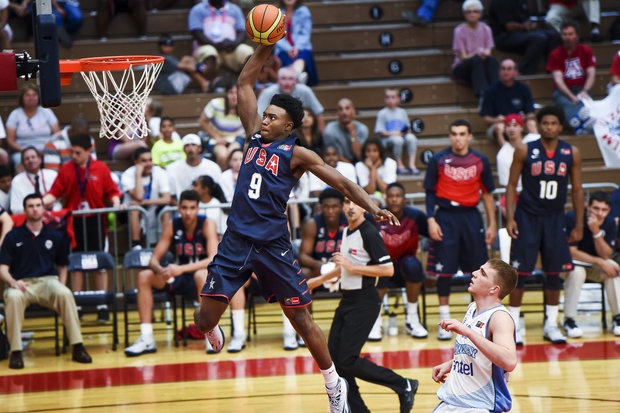 Michigan may have joined the recruiting trail for Jaylen Brown a little late, but the second-ranked prospect in the class of 2015 is going to give the Wolverines a fair shot.

The 6-foot-7, 220 pound small forward currently plans to take one of his two remaining official visits to Ann Arbor.

“I do think that he will give them the opportunity and visit,” said Mechalle Brown, Jaylen’s mother, in a phone interview with UM Hoops. “Michigan is definitely up on the list that he could want to find a little bit more about what goes on inside.

“He’s very interested in learning more about Michigan. That’s for sure; that’s a definite.”

Brown has already made official visits to Kansas and Kentucky and has an official at UCLA this weekend. The Wheeler (Ga.) High School forward has also received interest from Georgia, North Carolina and Georgia Tech.

Mechalle plans to sit down with Jaylen soon to finalize which schools will receive official visits, and she feels Michigan would be among them, though she warned plans could change.

But Michigan carries a little more clout for Brown, because his family is from Muskegon and his uncle went to school there. As Ryan Falker, Brown’s AAU coach, explained to UM Hoops, Brown “always wondered” why the Wolverines weren’t recruiting him until recently.

Brown plans to make his collegiate decision during the second NLI signing period, which ends May 20, and isn’t rushing the process.

“Michigan, of course, needed no introduction,” Mechalle Brown said. “They reached out and spoke with Jaylen regarding his interest, and since we are Michigan people, we definitely have a big interest regarding Michigan.”

“He’s very engaging, very excited about Michigan,” Mechalle said of Jordan. “There’s a sense of stability, and also, with the staff being able to develop the kids and having a rich tradition and the team just being able to seem like they work well together — I think that’s a big part of the coaching staff, as far as how they interact with the kids.”

Some of the interest in Michigan, Mechalle said, comes from seeing the coaching staff develop under-recruited players into NBA Draft picks.

Though Mechalle said Jaylen has become busier with school and the upcoming season, Brown and Michigan still communicate “quite frequently.”

“I like that they are there, we know they’re there, they keep in touch, and I like that,” Mechalle said. “I know that Michigan is a good institution. … I would want him to pick a place where it’s a good fit, and he could excel academically as well as athletically.”