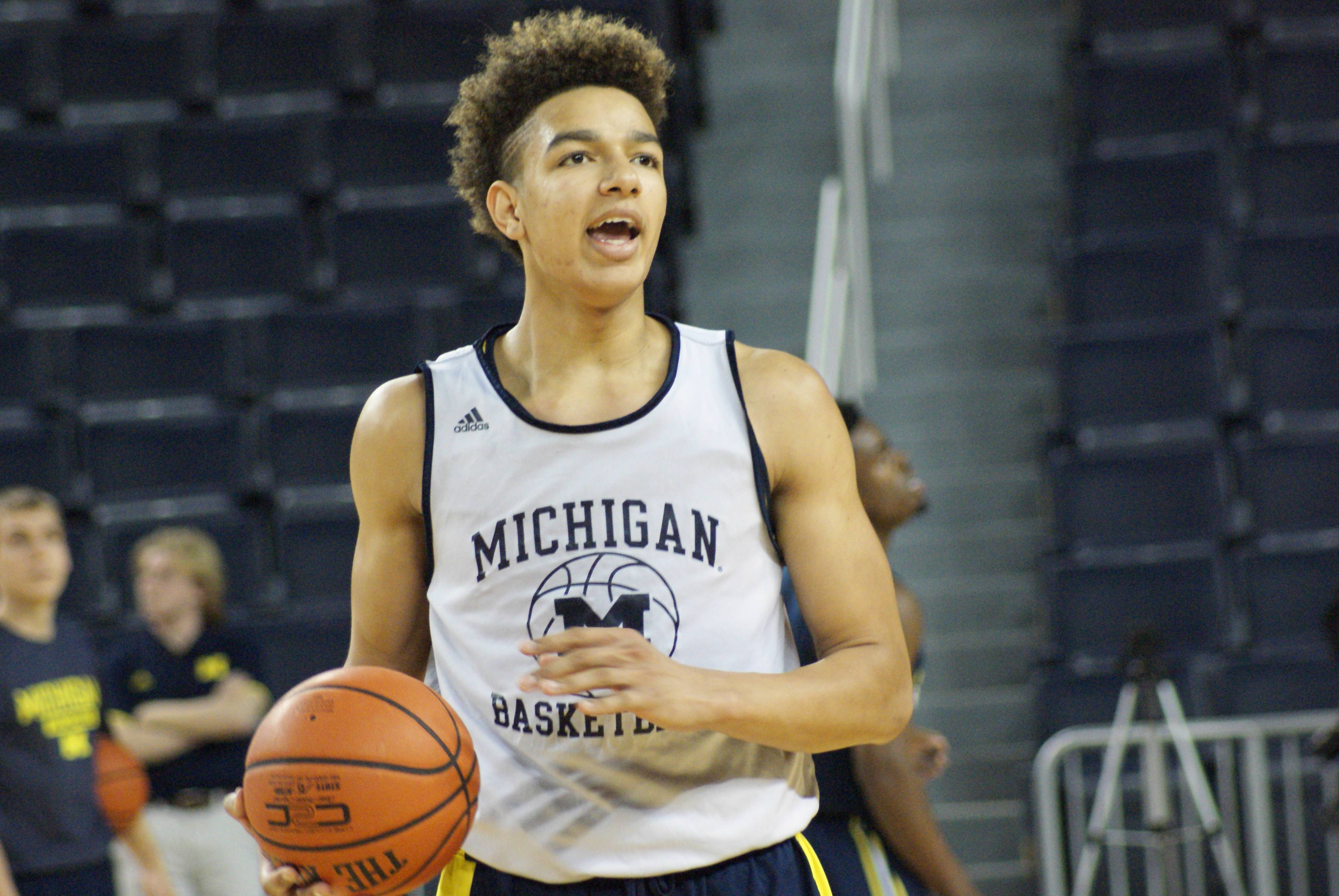 The Michigan basketball team opened its doors to media Thursday for an afternoon of interviews, photo shoots and practice. Here are five takeaways from Thursday’s open practice.

The Michigan basketball team opened its doors to media Thursday for an afternoon of interviews, photo shoots and practice. It was the first opportunity to observe the entire freshman class in action as the six newcomers vie for a spot in the Wolverines’ rotation. Here are five takeaways from Thursday’s open practice.

John Beilein has stated repeatedly that by the end of his career at Michigan, DJ Wilson will play on the wing. But as the coach evaluates who’ll start at the five, he continues to present the 6-foot-9, 200-pound freshman as a viable backup option.

Thursday, Beilein noted that Wilson is a good defender and rebounder, but that he sometimes struggles with consistency offensively.

“We’re still trying to figure out where best to play him,” Beilein said. “We’ll have to plug him in in any position we can use right now.

“I know that any scoring opportunities that he’ll have will come around.”

Wilson lacks the strength to be a regular big man, but he does have a soft shooting touch. During an individual drill Thursday, he knocked down five of his first seven 3-point attempts. The freshman also led fast breaks later in practice, and his 7-foot-3 wingspan was disruptive on defense.

Wilson will see time at every frontcourt position. And as Beilein said, it’s just a matter of gaining some consistency.

It’s no secret that freshmen are going to play important minutes for Michigan this season and several have already stood out.

“It comes and goes, and I won’t single people out right now,” Beilein said of his incoming freshmen. “But there are a couple of them right now that are exceptional at taking the task and applying it, as we say.”

Aubrey Dawkins may be regarded as the best athlete in the freshman class, but Kameron Chatman continues to demonstrate a complete game.

Beilein said Chatman immediately graded out as a rotation player when he arrived on campus and is working toward a ‘starter grade’. It wasn’t hard to see why during the open practice.

The freshman wing had an explosive first step in mock contact drills and looked comfortable attacking the basket. Though Beilein wouldn’t say if Chatman has earned a starting role, he’s expected to replace Glenn Robinson III at the four.

Meanwhile, Dawkins looked every bit like the player who dazzled at an open practice before the Italy trip by catching an alley-oop with his head near the rim.

With that said, both clearly need to grow stronger. But the athleticism is there for the coaching staff to mold.

Ricky Doyle has made physical strides

Ricky Doyle is a large man, and not in a bad way.

Beilein admitted that he had concerns about Doyle’s quickness and mobility when he arrived on campus this spring, but he’s been encouraged by his progress over the last several months. The freshman center shed 6% of his body fat during summer workouts, and Thursday, he demonstrated that he can move, he’s strong, and he’s not afraid to seek contact.

Beilein stressed that both Doyle and redshirt freshman Mark Donnal have taken “baby steps” but have to improve positioning, adding that “you won’t see Kevin McHale out there” from either player. But the coach praised Doyle’s physicality and mentioned a jump hook fans will “love.”

Doyle didn’t put that part of his arsenal on display during the open practice, but he did demonstrate that he could be physically capable of contributing immediately as he continues to refine his fundamentals.

Austin Hatch belongs in this program

Austin Hatch likely won’t contribute a meaningful minute to the Wolverines this year.

He’s still limited in practice, and he’s clearly much slower and less physical than his teammates. But every single time Hatch participated in a drill, at least one teammate or coach shouted a message of encouragement.

Hatch saw the court in Italy, and Beilein has been tight-lipped about whether the guard will redshirt this year. Regardless, Michigan’s behavior toward Hatch on Thursday demonstrated the freshman’s integral role on the team.

“So many people say, ‘What a great thing to have him on this basketball team’. No. The gift is from Austin Hatch to every one of us,” Beilein said.

Zak Irvin on track to breakout

Zak Irvin hasn’t lost his shooting touch, sinking threes with ease Thursday when it seemed everyone else was having a spotty afternoon.

Irvin also contributed the best dunk of the day, throwing down a one-handed slam during a drill.

We still don’t know if Irvin can beat a defender and score off the dribble, nor did we see him attack the basket off a ball screen. But Beilein said “you’ll see a different athleticism” from Irvin this year. Believe it.