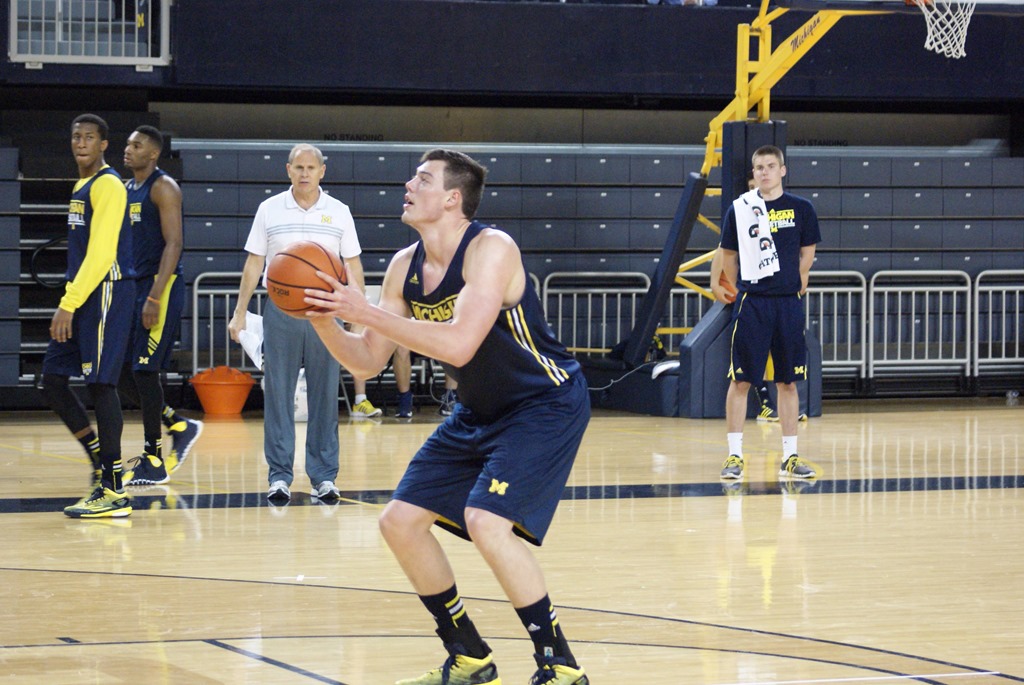 The center had twisted his ankle near the end of an open gym session that Beilein was attending. When Doyle sat down to speak with the coach afterward, Beilein suggested the recruit rest his leg on him to help with icing the injury.

“I didn’t expect any other coaches to do that,” Doyle recalled at Michigan Media Day last Thursday. “Just Coach Beilein.”

The experience was part of what moved Doyle to commit to Michigan in March of 2013. And just a year and a half later, as a true freshman with raw but undeveloped talent, he’s vying to start at the five for a team with NCAA tournament expectations.

Though the Wolverines don’t return anyone who started at center last season, Doyle faces significant competition at the position. There’s Max Bielfeldt, Michigan’s only frontcourt option to have played in a Division I game, and Mark Donnal, who impressed in practices last season despite being redshirted. Even DJ Wilson, another true freshman, is versatile enough to see time at the five.

But Doyle is a true back-to-the-basket threat unlike anyone Beilein has had at Michigan, prompting assistant coach Bacari Alexander to say last month that the center will be “bringing the thunder” on the court.

“I would say I’m a low-post player who can go out and shoot the mid-range, and I am a more physical player that throws their body around and just does what has to be done to help the team,” Doyle said. “I’ll take a charge, I’ll dive on the floor for a loose ball and just do whatever I can to win and help the team succeed.”

The competition to start has been especially fierce with Donnal, “the lightning,” whose game differs in that he’s a better shooter and can operate effectively in the pick-and-roll.

“On the court, it’s like we look at each other, and we go at each other. The end result, we know we’re making each other better. That’s why we’re doing this.”

If Media Day was any indication, Michigan’s practices have been plenty physical, and that fits Doyle’s bruising style just fine. Beilein has praised Doyle’s ‘old school approach’ since his commitment and recently mentioned the center has a jump hook people will “love.”

But concerns remain regarding Doyle’s fitness and mechanics.

The freshman has done everything in his power to quell those concerns. He arrived on campus early this spring and has shed 6% of his body fat over summer workouts, and he displayed good athleticism during the Wolverines’ open practice, but even he admits fitness is “still a work in progress.”

“The speed of the game is a lot different, so I am getting adjusted to that,” Doyle said. “Playing with Derrick (Walton) and Caris (LeVert), who are both very fast players, now I am getting in shape, and eating healthier.”

And while he averaged double-digit rebounds in Michigan’s last three games during its summer trip to Italy, he didn’t grab a single board in the Wolverines’ first contest — against perhaps the team’s weakest opponent.

Alexander worked with him in Italy to correct basic mechanics, but Beilein said Thursday that footwork remains a major focus with both Doyle and Donnal.

“Both of them have been really solid and making good progress, baby steps,” Beilein said. “Baby steps, trying to make the right play, playing hard and learning to play smart, without fouling and making the right play.”

No one is expecting double-double production from Doyle every night, but Michigan is going to need something from its freshman big. In the mean time, Beilein and big man coach Bacari Alexander will take things day-by-day and practice-by-practice to try to prepare Doyle for the challenges ahead.