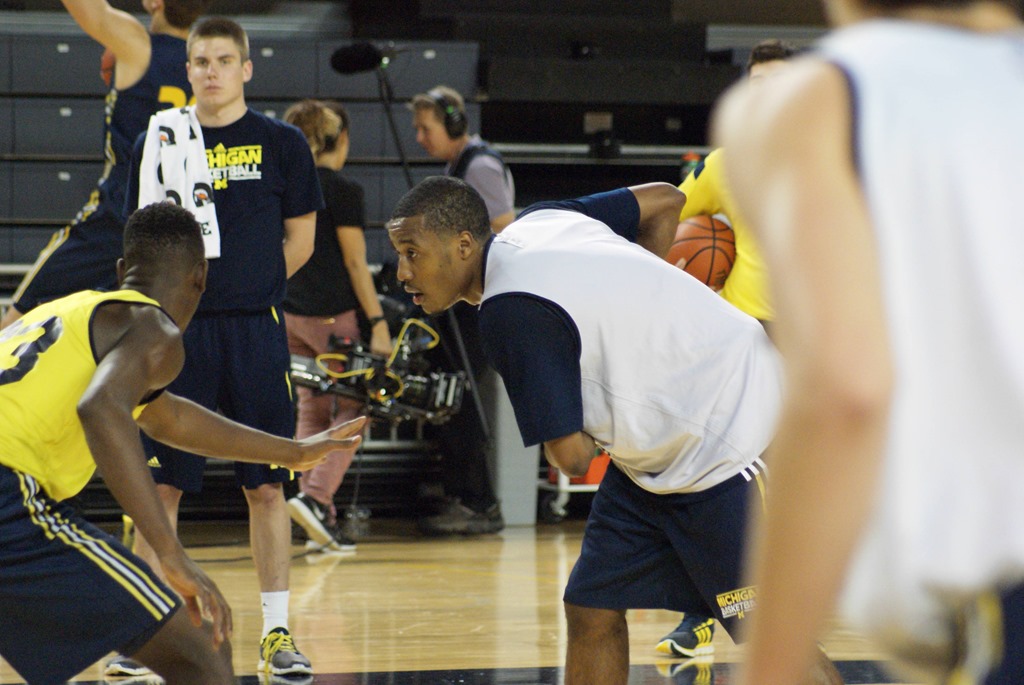 His teammates and coaches call him “Rahk” for short.

And it might be worth spending some time to get to know Muhammad-Ali Abdur-Rahkman, the true freshman from Allentown Central Catholic (Penn.) High School who is expected see a handful of minutes per game backing up Caris LeVert at the two.

Especially after Michigan’s summer trip to Italy, when John Beilein said the guard played “beyond (his) years.”

As a 19-year-old high-school senior, Abdur-Rahkman averaged 23.6 points, 6.2 rebounds and 4.1 assists per game, earning him a spot on the Pennsylvania Sports Writers All-State team for the fourth time in as many years.

Despite the numbers, scouts generally tabbed him as a mid-major-plus prospect. But Beilein extended an offer during his official visit in April, and Abdur-Rahkman committed shortly after.

“His ability to create an offense, score the basketball and control game temp will enable Muhammad-Ali to make valuable contributions to our backcourt,” Beilein said at the time.

Michigan fans got their first glimpse at Abdur-Rahkman during the trip to Italy. There, the 6-foot-4 guard averaged 10 points, 3.3 rebounds and 2.5 assists per game. Perhaps most importantly, he demonstrated a penchant for attacking the basket and was rewarded for it, shooting nearly twice as many free throws as anyone else on the roster during the trip.

“Muhammad has really gone out there and used his speed, where he has been able to get to the foul line again,” Beilein said during the trip. “Right now, I think what we are valuing is his ability to see the floor when he’s going his quickest.”

For a program that hasn’t ranked better than 302nd in free throw rate since 2007, the ability to attack the rim should be a welcome change of pace for Beilein’s offense.

At Michigan Media Day last Thursday, Beilein praised Abdur-Rahkman’s versatility, saying the freshman can play either guard spot. And during the team’s open practice that afternoon, Abdur-Rahkman was exceptional with ball distribution on fast breaks.

Abdur-Rahkman looks like he fits the mold of the combo guard, and while he’s great in transition, he should be plenty serviceable in isolation and working ball screens too. In high school, he was also lauded as a great defensive player because of his length.

And Abdur-Rahkman comes from a family of basketball players and says he has been watching the sport since he was two years old, helping ease the transition to the collegiate game.

“There have been some times where it has been rough, but the speed of the game is probably the biggest thing,” he said. “Cutting down on mental mistakes due to the speed has been an adjustment, but everything else has been great.”

Abdur-Rahkman’s defensive abilities might give him an edge over Spike Albrecht as the first man off the bench in certain situations. Though a reliable ball handler, Albrecht’s lack of size and mobility often make him a burden defensively.

While Abdur-Rahkman plays well in transition and on ‘D,’ his inconsistent jump shot could become a nuisance at some point this year and limit his playing time. The guard’s jumper was identified as a weakness across the board by scouts, and he didn’t do much to quell those concerns with a 2-for-10 showing from three-point range in Italy.

If he can start knocking down jumpers reliably, Abdur-Rahkman should become a reliable contributor off the bench.

Bottom Line: As a 20-year-old freshman with the athleticism to be an above-average defender, Abdur-Rahkman has a role on this team. The battle for minutes in the backcourt with Derrick Walton, Caris LeVert and Spike Albrecht all established, but Abdur-Rahkman’s size and quickness will continue to be assets. He won’t be able to push the tempo as much as he did in high school, so he needs to improve his jump shot and demonstrate he can keep getting to the basket against good competition in order to see his role expanded.