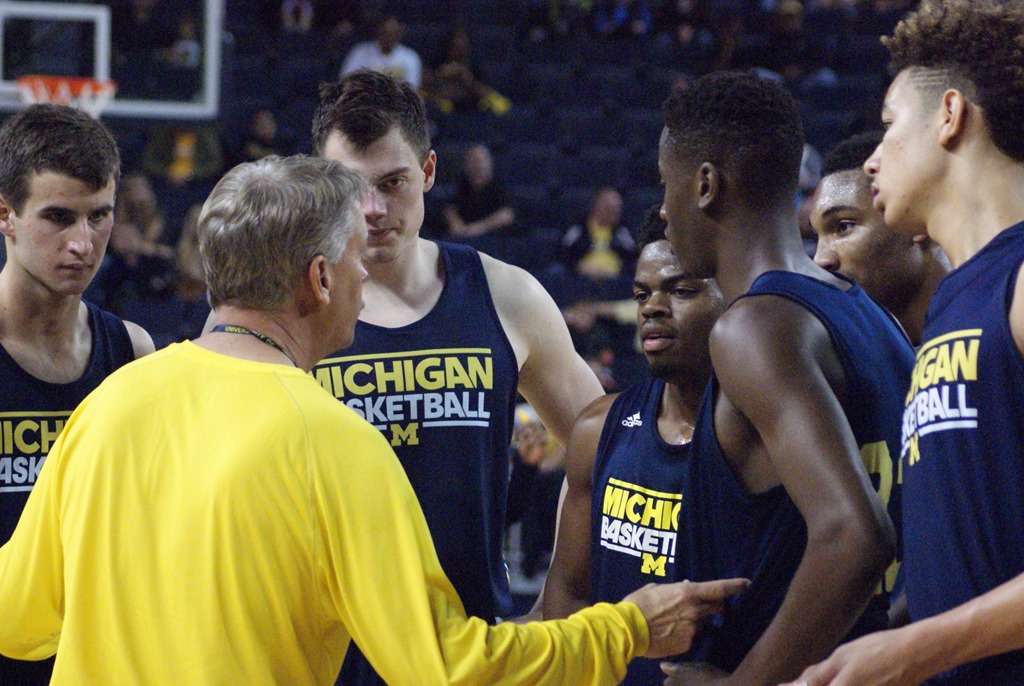 After the Michigan basketball team finished its hour-long open practice Wednesday evening, John Beilein addressed the more than 1,000 fans who had shown up to watch at Crisler Center.

“I want to let you know that this team has so much potential,” Beilein said. “These guys have been waiting for all those shots, all those minutes, all those defensive possessions.”

The coach promised that the Wolverines will be fun to watch this year. But he also stressed that with such a young roster, some of the excitement will come from witnessing the team’s growth throughout the season.

And the open practice showcased plenty of both aspects: Caris LeVert, Zak Irvin and Derrick Walton all looked improved and several of the freshmen impressed, but Beilein grew agitated with sloppy decisions from young players.

Freshman Mark Donnal struggled offensively and looked overpowered in the paint. After a sequence in which he missed layups in consecutive possessions, Beilein instructed the center to run the stairs. Aubrey Dawkins also suffered a similar punishment after attempting — and missing — a one-handed lob.

Muhammad-Ali Abdur-Rahkman started on Michigan’s second team alongside Dawkins during the scrimmage, and the guard looked comfortable attacking the basket and as a distributor. But he too drew an admonishment from Beilein for dribbling himself into trouble and committing a turnover, and the freshman continues to search for consistency with his jumper.

The scrimmage ended with a mock end-of-game situation that began with the score tied at 70. LeVert sank a three from the top of the key with 3.4 seconds remaining — Beilein bumped the clock back up to four seconds because “I can do what I want” — to secure a 81-78 win for his team.

Here are other takeaways from the open practice with just four days remaining until the Wolverines’ exhibition.

Kameron Chatman poised to be a starter

Unsurprisingly, Kameron Chatman played with the first team alongside Walton, LeVert, Irvin and Donnal during the scrimmage.

The freshman started during the team’s summer trip to Italy too, and Beilein said during Michigan Media Day last week that the forward graded out as a member of the Wolverines’ rotation the moment he stepped on campus.

He looked comfortable with the starters Wednesday, finishing a portion of the scrimmage with a one-handed putback lay-in on his own missed layup. Defensively, he helped force a turnover by trapping Max Bielfeldt into a three-second violation.

Even before the scrimmage had started, Chatman was earning fans’ appreciation. His spin move to get to the basket during a two-on-one drill drew an audible reaction from the crowd.

Also of note among the starters, Donnal, Ricky Doyle and DJ Wilson all saw time at the five, in that order. Though Donnal struggled, Doyle and Wilson couldn’t establish themselves as significantly better offensive threats.

Defensively, Wilson earned loud applause for an impressive block during the two-on-one drill before the scrimmage.

Though the Wolverines scrimmaged for less than 30 minutes, it’s difficult not to feel at least some level of concern with the team’s centers. Beilein said last week they’re making “baby steps,” and, unless the scrimmage was a major aberration, they need to take major strides quickly.

Donnal had issues finishing in the paint, and he also lost a pair of defensive rebounds to Bielfeldt, who is two inches shorter at 6-foot-7. Doyle is by far the most physical of the bunch, but he didn’t produce anything from the post, which is supposed to be his biggest strength.

The lineup of Walton, LeVert, Irvin, Chatman and Wilson, while certainly the most athletic group Beilein sent to the court, lacks much of a physical inside presence. Though Wilson shower flashes, he needs to add muscle to his 6-foot-9, 220-pound frame to avoid becoming a defensive liability at the five against stronger centers.

Michigan’s offense Wednesday was very much reliant on the three, so much so that Beilein had to remind his players to wait for open looks rather than taking them early in the possession.

Some of that was a result of the lack of production from the centers, and it could also be attributed to LeVert, Irvin and Walton electing to distribute the ball rather than attacking the basket as much as their talent allows.

A three-point focused attack is nothing new for Michigan, which has ranked worse than 50th nationally in 3PA/FGA just once during Beilein’s tenure, but it could be even more important with such an inexperienced front court. The Wolverines have as many talented perimeter threats as anyone in the conference, but all eyes will be on the race to get the young big men up to speed.