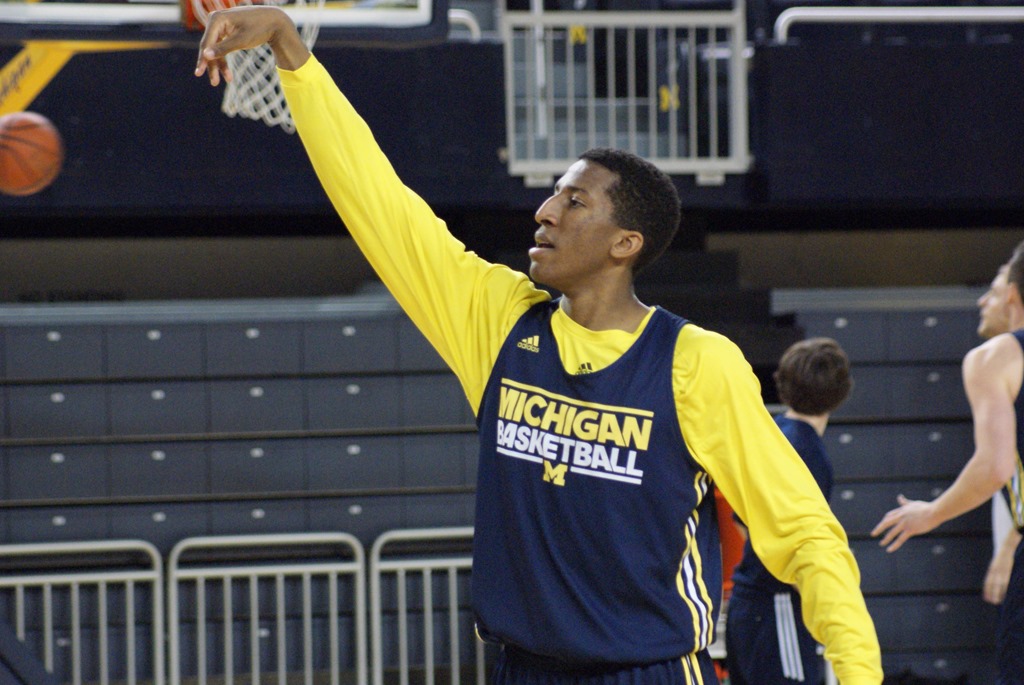 If you think predicting the success of this year’s Michigan team seems more difficult than usual, you’re not alone.

The Wolverines have plenty of incoming talent to fill the spots of five missing lettermen from last season’s squad. But the freshmen are just that, and their abilities in Monday’s exhibition will differ greatly from what they can accomplish in February or March.

There’s Kameron Chatman, the forward who is expected to start immediately at the four. There’s Ricky Doyle, the bruising center who could be one of several to contribute at his position. There’s DJ Wilson, who is versatile and has a 7-foot-3 wingspan that clogs lanes defensively.

And then there’s Aubrey Dawkins, who isn’t projected as a starter but should factor into the Wolverines’ plans from day one. A player with his athleticism isn’t going to be hidden on the bench very long.

Dawkins was the sixth and final member of the 2014 recruiting class, choosing Michigan over Dayton. Several other mid-major programs expressed interest when Dawkins matured from a 3-point specialist into a more versatile offensive threat and aggressive rebounder during his prep year at New Hampton School, but he was still largely under the radar.

The forward was tabbed as a two-star prospect by Scout and ESPN, and he was labeled a three-star recruit by Rivals. After a few months on campus it appears that Dawkins might be yet another late under-the-radar steal for John Beilein.

John Beilein was immediately impressed by what the Dawkins brings to the table.

“I like what we’ve seen from Aubrey Dawkins,” the coach said before Michigan’s summer trip to Italy. “He shoots the ball well, and he’s athletic. There are some things like Hardaway and like Glenn in his game, but there’s a lot of refinement to do.”

Slapping a freshman with those lofty comparisons is quite the statement. During the Wolverines’ open practice in the summer, Beilein called Dawkins the “best athlete in the gym.” But the forward backed it up with a thundering alley-oop, along with several other difficult finishes in traffic.

Anyone who was at Wednesday evening’s open practice can attest to Dawkins’ athleticism. The players themselves agree, unanimously voting him the best dunker on the team.

In Italy, Dawkins was usually the first person off the bench, replacing starters Zak Irvin or Kameron Chatman at the three and four, respectively. He reached double-digit scoring in Michigan’s final two games, averaging 9.3 points on the trip. The freshman also shot 62.5% from 3-point range.

Dawkins showed off his smooth jumper again Wednesday, sinking a pair of 3-pointers during the scrimmage after nailing outside shots during drills.

“I can’t say enough about the way (Muhammad-Ali Abdur-Rahkman) and Aubrey played over the summer — a little beyond their years,” Beilein said last month.

As a recruit, one of Dawkins’ biggest issues was his struggle to create off the dribble and his lack of a mid-range game. He didn’t do much in Michigan’s two open practices this fall to alleviate those concerns, but as a freshman his role is likely to revolve around shooting threes, finishing at the rim and playing solid defense.

On Wednesday, he was one of two players to run the stairs at Crisler Center, receiving the punishment from Beilein for missing a one-handed lob instead of going up with two hands.

That’s what you get when you rely on freshmen to fill the void left by current NBA players.

“Guess what?” Beilein said in mid-October. “There’s going to be young players out there all over the place. … We can’t look to our bench and say, ‘Let’s get a more veteran player in there.’ There aren’t any.”

On a team that doesn’t have much frontcourt depth, expect to see Dawkins log plenty of minutes on the wings.

Bottom Line: Dawkins seems like an obvious candidate to enjoy a solid freshman campaign. He can’t do enough with the ball to become a focus of Michigan’s offense, but there will always be use in Beilein’s system for an athletic forward who can hit threes. It’s fair to expect Dawkins to fill Zak Irvin’s role as the forward with the ability to come off the bench to knock down spot-up threes. And though Dawkins likely won’t shoot 42.5% from beyond the arc like Irvin did last year, we might get a few more highlight-reel dunks out of the freshman.