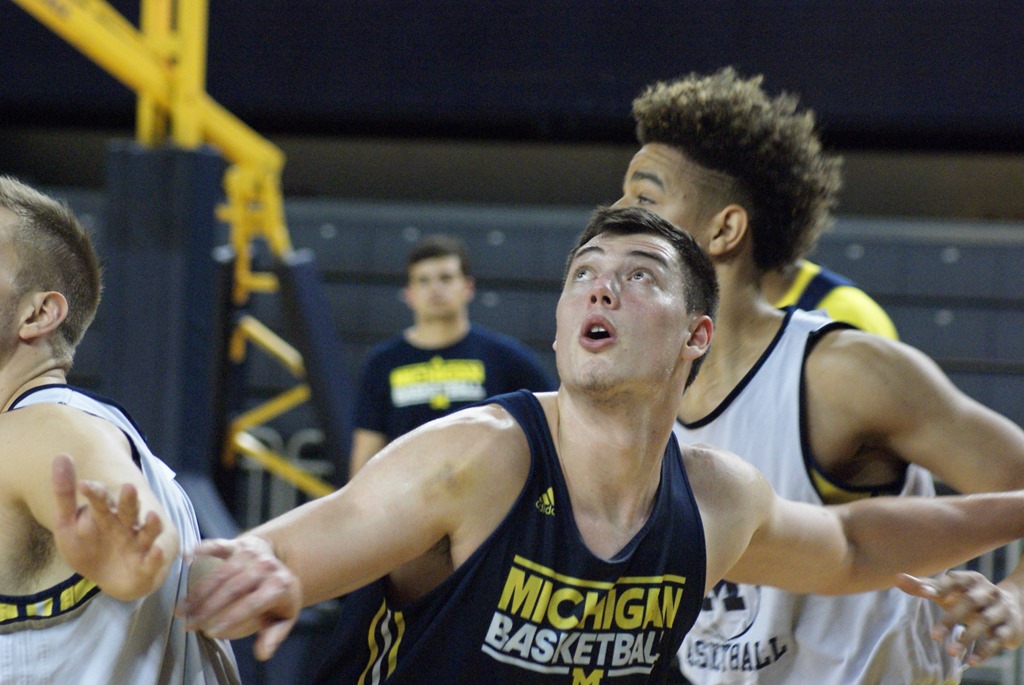 Michigan is set to play its lone exhibition game on Monday evening before tipping off the 2014-15 season against Hillsdale one week from Saturday.

After an offseason that has featured plenty of practice and a trip to Italy, playing a game at the Crisler Center will be a welcome development.

“I know I just want to play games,” John Beilein said at a Friday press conference. “We’ve been practicing for a while. I’d love to keep practicing and practicing because there’s so many things we have to do and I like the progress we’re making, but it’s never going to be fast enough for them or our coaching staff, but we are making progress. I Feel like sometimes we’re running a marathon but as far as getting to know what it takes to win we’re on mile 5 or 10 or 12 of a 26 mile marathon and there’s so much more to do.”

With seven Wolverines having never played in a collegiate game, the first exhibition game will be equal parts exciting and uncertain for Beilein and his staff.  Michigan’s coaching staff is still trying to settle on a final rotation, but is ready to narrow things down.

“I started developing (a rotation) in the last week, just who is going probably in the top seven or eight,” Beilein said. “We have a pretty good idea of the starting five but it will be the final thing is trying to get our rotation together. When we’ve had any scrimmages it’s been equal opportunity, equal time and now that will change. Now we’re trying to roll into the top eight, nine, ten and predominantly the top seven or eight are going to play the major minutes.”

No redshirts in mind

Despite the fact that John Beilein has generally favored a short bench, and there are only so many minutes to go around, Beilein made it clear that he isn’t planning to redshirt any of his six freshmen. But as in past years he wouldn’t rule out the possibility of holding someone out for the first few weeks as a safety blanket.

“Not right now,” Beilein said. “There was a thought a little bit before, but I don’t think so. I think that all six of them deserve an opportunity to get in there, I think we’ll know more after the Wayne State (game) and maybe I’ll hold somebody off for a little bit, but I haven’t even thought about that right now. I think at one point, I thought maybe a couple guys (could redshirt), but they’ve come on strong lately so we may need them.”

DJ Wilson is one player that had been linked with a potential redshirt, but the 6-foot-9 big man has impressed with his versatility in practice after missing the Italy trip with a broken finger.

“It changes us defensively immediately because we can do a few other things that you can’t do with a traditional big,” Beilein said. “So that’s been helpful and (Wilson’s) attitude about playing two positions has been absolutely terrific. He wants to get on the floor and he says, ‘coach I don’t care what (position) I want to get on the floor’. He’s going to become a natural forward at one of the forward spots eventually but right now getting on the floor for him to give meaningful minutes anywhere he can. It may be major, it may be minor, we don’t know yet.”

Freshman big man Ricky Doyle is expected to feature heavily at the five position this year for the Wolverines, but he’ll enter the season carrying a bit of an injury.

Doyle has been battling through a ‘slight’ ankle sprain throughout the last few weeks which has limited him in practice. However, the 6-foot-9 center is expected to be full-go in Michigan’s exhibition opener.

“Ricky has had these little nagging (injuries), he wasn’t going full court until yesterday and then he had another slight problem before that we were just overly cautious with him,” Beilein explained. “So most of the minutes have gone with Mark right now, DJ and Max (Bielfeldt) have had minutes and now Ricky is back at full go. I’m hoping to give Ricky some really good time this upcoming game so he gets in there more.”

Doyle split the available minutes at the five position during Michigan’s Italian tour and has looked solid in early season open practices. However, Mark Donnal still appears to have the upper-hand to start at the five spot.

“Normally what I will do is that we’ll stay with what we’ve been doing until someone clearly gets in front of someone else,” Beilein explained. “By injury and by being a little bit more veteran with a year as a redshirt, Mark got the first shot but Ricky and DJ and Max are all challenging.”