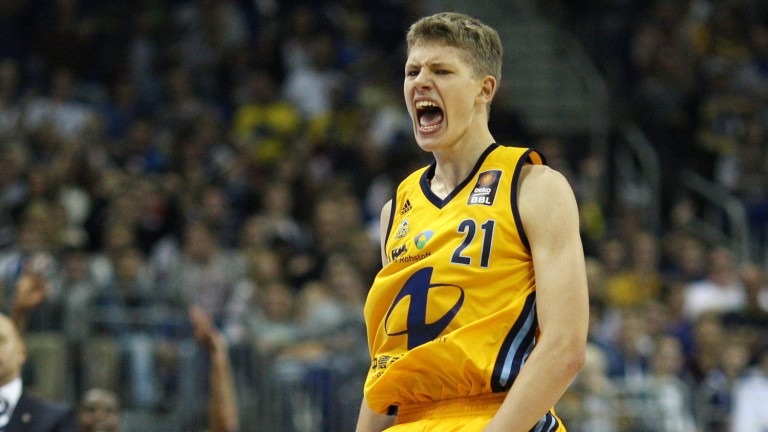 Wagner is a 6-foot-9, 194 pound forward who came up with Alba Berlin youth program and is now a member of the senior team that beat the San Antonio Spurs in October.

Wagner has yet to sign a professional contract with Alba Berlin and is strongly considering attending college in the United States. John Beilein traveled to watch Wagner and met with his family. The news was first reported by BZ-Berlin and Wagner confirmed the Michigan interest.

“John Beilein flew especially for Wagner in Berlin,” BZ-Berlin wrote (translated). “The coaching legend met with Wagner and his family. A scholarship to Wagner Beilein have not yet offered. But (Beilein) is said to have expressed a strong interest and invited the Berlin (to visit) the (Michigan) campus.”

Duke and UConn have also been linked to Wagner, who plays with former UConn forward Niels Giffey at the club level. Michigan appears to be the first school to travel to Germany to recruit the talented forward.

“To study has always been my goal and that is parallel to the sport in the United States at the best,” Wagner recently told Berliner-Zeitung (translated). “On the other hand, it was always my dream to become a professional. Because the temptation is great, tackling issues. This is both cool.”

Wagner was born April 26th, 1997 and would be a member of the 2015 class. He recently told BZ-Berlin that he will make a decision on his future, signing professionally in Germany or attending college in the United States, after the season. He has reportedly been offered a four-year contract by Alba Berlin.

“We are in a constant exchange,” Alba’s sporting director told Bild, “and I am confident that he will remain with us.”

European Prospects scouted Wagner in May and was impressed with his versatility.

The young Moritz Wagner is a really interesting prospect for the future. Used as a PF on multiple occasions, Wagner showed that he has an outside game and that his future should be on the SF position. He can shoot from outside, either on catch-and-shoot situations or in the Pick and Pop when being the screener. Wagner can also put the ball on the floor which works particularly well when used against taller power forwards. He is also able to drive with direction changes and finish against stronger or taller players in the paint. Athletically, he is looking good and with his overall length, he is a good vertical presence on both sides of the court. Wagner really needs to be used on the wing positions in the future as he has the tools to become an interesting long small forward in the future. It will be interesting to see if ALBA can do this as they will lack some inside presence in the next generations of their NBBL roster so that Wagner risks to be used as a pure PF or even center next season.