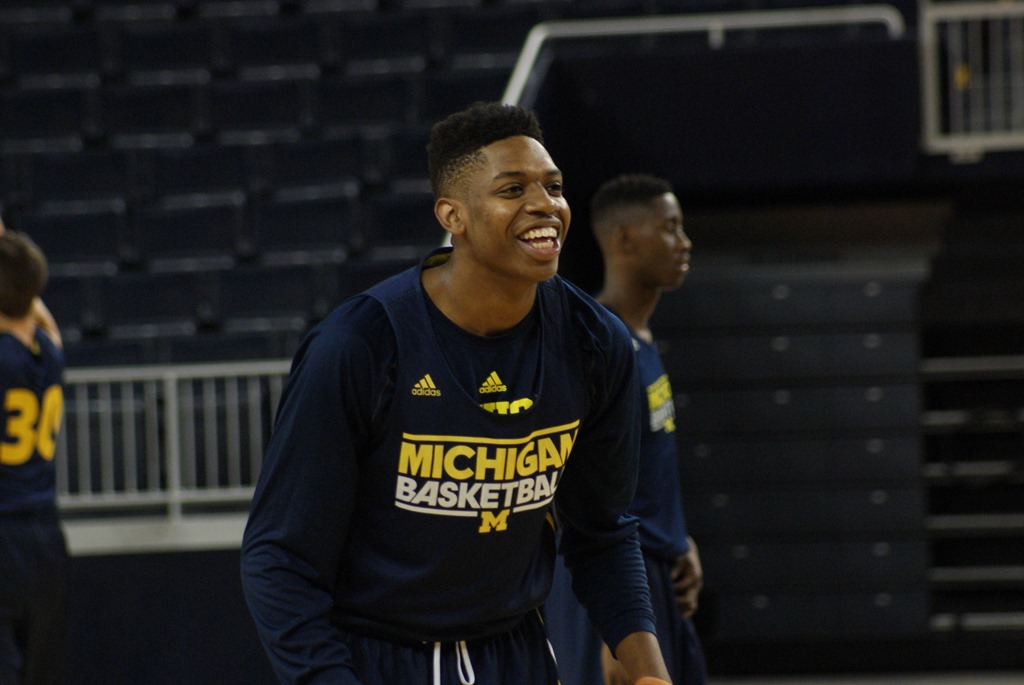 After weeks of practices, scrimmages and a trip to Italy, Michigan will finally take the floor at the Crisler Center against another college team. The Wolverines host Wayne State at 7 p.m. this evening in their only exhibition tune-up before Saturday’s season opener against Hillsdale.

The Warriors are making the trip down I-94 for the second consecutive season to face the Wolverines for an exhibition contest. Michigan won last year’s game 79-60 and Wayne State lost its top three scorers from that group. 6-foot-3 guard Michael Lewis highlights Wayne State’s returning group and he managed 15 points and six rebounds at Crisler last November.

Here are five topics to keep an eye on in Michigan’s season opener.

Are the big men ready?

All eyes will be focused firmly on Mark Donnal, Ricky Doyle, DJ Wilson and Max Bielfeldt and wondering whether they can carry the load at the five position.

Michigan’s unproven bigs will open the season with a passable test.

Even though a contest against the Division II Warriors isn’t going to answer all of the questions, the first game against live competition is an important first step. Mark Donnal is expected to get to the start at the five position, but all four big men should get ample opportunity to contribute.

John Beilein will only say that Kameron Chatman has graded out as a ‘rotation-level’ player, but the 6-foot-7 freshman seems destined to start at the four. He started every game in Italy and is a perfect fit for the right-side four position because he’s a natural lefty, allowing him to play right-to-left into the center of the floor.

Chatman, one of the highest rated recruits that Beilein has ever signed, will be making an important debut, but the more interesting storyline will be who comes off of the bench and when.

True freshmen Aubrey Dawkins, Muhammad Ali Abdur-Rahkman and DJ Wilson all could factor into the two through four positions and this first exhibition should help illustrate where all three players stand. All three players possess unique elements to their game, but also have question marks. This will be the first chance to see how they fit into the mix.

Michigan has blossomed into one of the nation’s best offenses over the last several seasons, thanks in no small part to the high ball screen. In 2012 and 2013, Trey Burke was one of the best ball screen guards in the nation. After he left for the NBA, pundits questioned who would take over the ball screen game in Ann Arbor and Nik Stauskas rose to the occasion.

Last week, John Beilein emphasized that it would be Caris LeVert and Derrick Walton who would split the available ball screen possessions. Both players were productive in ball screen situations last season, but they also left room to grow.

LeVert will be searching for more balance in his game this season as he looks to improve on his mid-range consistency and his ability to distribute off of the ball screen. Walton will need to be more aggressive not only in finding his own offense, but creating for the team.

A lot of focus will be on the new faces in the lineup, but the physical improvements of Zak Irvin will also be on display.

Irvin added five inches to his vertical leap and is now listed at 215 pounds. Last year Irvin struggled a bit physically, mostly because he was playing the four position despite his skinny freshman frame. The question this season is how his game grows with the physical improvement.

Expecting Irvin to make a Nik Stauskas-like development into a primary ball handler is unfair, but he can make a tangible improvement defensively and on the glass. There’s no question that Irvin can and will shoot a lot of threes and he’ll make more than his fair share. But Michigan also needs him to rebound and defend much more consistently this season as a full-time starter.

Irvin appears to have the tools and could be capable of leading Michigan in scoring, but it’s time to see him put together a complete game.

John Beilein has hinted that he won’t hesitate to play his two point guards together this season.Walton and Spike Albrecht are two of Michigan’s most experienced players. They can both shoot the ball reliably from the perimeter and they very obviously have Beilein’s trust. But there could also be defensive drawbacks to playing both 6-foot guards on the floor at the same time.

The two point guard lineup could be something of a crutch for Beilein early on. With so much inexperience and uncertainty in the frontcourt, playing Walton and Albrecht together could provide some glue to hold everything together.

Tonight’s game will be broadcast through the BTN2Go’s subscription service. Subscriptions can be purchased for $9.95 per month (Michigan only) or $14.95 per month (all Big Ten) and include access to BTN-Plus broadcasts. The Wolverines will also play Nicholls State on BTN+ (Nov. 29th). If you don’t want to shell out the money for BTN-Plus, you can also watch a replay of the game on the Big Ten Network at 10:30 p.m on Tuesday.