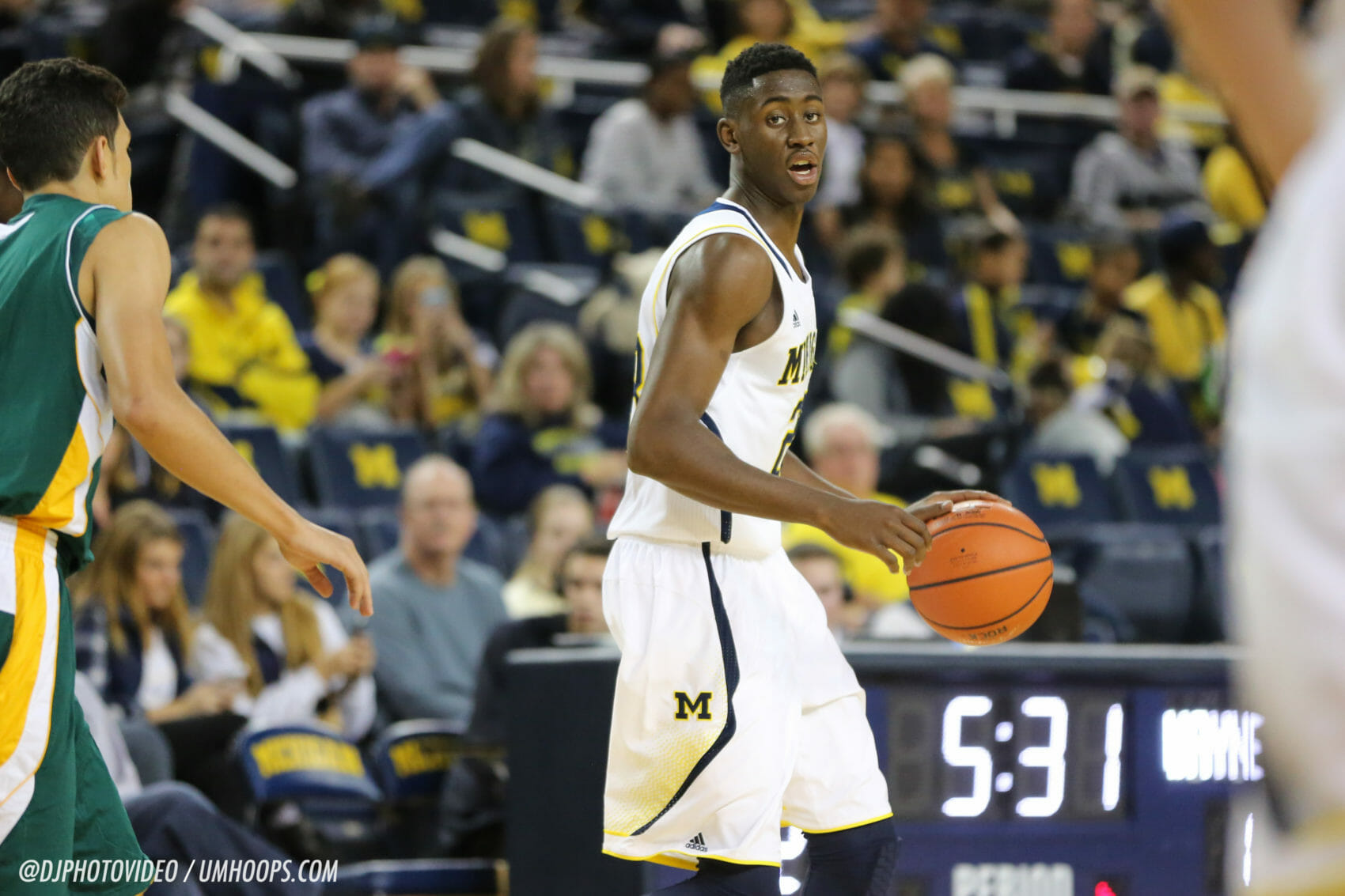 @skurnie: How much 1-3-1 zone will we see this season? Lots of length and youth

Every year it seems like I write that this is going to be the year where John Beilein dusts off the 1-3-1 zone and it is effective. And then seemingly every year the 1-3-1 zone rarely works and gets scrapped midway through the season.

Over the last couple years, Michigan has generally scrapped the 1-3-1 zone by Christmas and even when it experiments with a zone defense in Big Ten play, it has usually gone with the more conservative 2-3 variety.

Michigan has a lot of length to play with. Putting Caris LeVert, Zak Irvin, Kameron Chatman and DJ Wilson on the floor at once should make a formidable zone group, at least on paper. On the other hand, Michigan’s roster is so young that the coaching staff might not be able to implement a zone package while still trying to bring the man-to-man defense up to speed. Rebounding out of the 1-3-1 zone is also much more challenging as it requires the center to be pulled further from the basket and eliminates man-to-man box out responsibilities.

I’m sure we’ll see the zone from time-to-time, but Beilein has proven over the last few years that he won’t stick with it if it doesn’t work.

@Reid20B:  With new B1G scheduling, how does Michigan’s schedule shake out compared to others vying for B1G Championship?

The Big Ten is difficult to sort out at this point beyond the fact that Wisconsin is the unanimous favorite and the next seven or eight teams are pretty good, but have major questions to answer.

Michigan State, Michigan and Ohio State are probably the most realistic ‘second tier’ (with Ohio State best among those three by my eyes), but there are seven more teams (Indiana, Iowa, Maryland, Nebraska, Minnesota, Illinois and Purdue) that are projected as top-40 national teams by Ken Pomeroy’s trusted computers.

The Badgers not only are the unanimous best team, they also only play Michigan, Michigan State and Ohio State once. Did I mention they are the favorites?

Michigan’s schedule is somewhere in the middle, but probably leans to the easier side. The Wolverines only play Wisconsin once, at home, but do have double-plays against Michigan State and Ohio State. Among that next tier of teams, Michigan only plays Indiana, Iowa, Maryland, Nebraska, Minnesota and Purdue once.  The Wolverines also play Rutgers and Northwestern, the most likely bottom-feeders of the conference, twice.

Overall I would say the Wolverines have a favorable schedule, but the bottom line is that with so many teams in the conference it’s going to be difficult to sort things out with such unbalanced schedules.

@cdbarker: Austin Hatch doesn’t want to just be a “cool story” by the time he leaves Michigan…Is it too early to know his new ceiling?

It’s still far too early and at this point it’s impossible to put any ceiling on Austin Hatch. It’s only a matter of time before he breaks through it. The amount of progress that he’s made during the three years since the plane crash has already been incredible, beyond what many would have deemed possible or likely. He deserves all of the time in the world to grow, but at this point how could you bet against him?

@Smoothitron: Michigan has had no shortage of early entry candidates. Other than Caris, who on the roster could make that leap?

I’ll go with Zak Irvin. He’s got a great frame and prototypical size for a wing guard in the NBA. His athletic improvement looks to be the real deal and I expect he’ll put up monster numbers this season because of his ability to get his shot off so easily. That being said, I’d still be somewhat surprised if anyone other than LeVert is discussing leaving school after this season. (I might have said the same thing about Nik Stauskas at this point last year.)

@jlustig22: Do you expect Walton’s assist numbers to rise a lot this year? Would you be surprised if LeVert actually led the team in assists?

I think Walton making a big jump in the assist category would be great news for Michigan and he’s certainly capable, but I wouldn’t be surprised at all if LeVert leads the team in assists.

Monday’s exhibition game was just a first taste, but LeVert looked more comfortable as Michigan’s primary ball screen player and creator. He was throwing drop off passes, holding the ball in late clock situations and he could easily play a Nik Stauskas role as a distributor.

@losfromcp: Which need is more imperative: 1) Big 3 (Levert, Walton, Irvin) to come up big, or 2) Young frontcourt to develop quickly?

This is a bit of a trick question.

The ‘big three’ of LeVert, Walton and Irvin are the most important part of the team. Michigan is going to be carried as far as its backcourt can take it. If one or two of the big three struggle or get injured, then the Wolverines are going to be in trouble this season. Right now, there’s no reason to believe that the ‘big three’ won’t get it done. They’re all fairly proven and they should be one of the better backcourts in the Big Ten.

On the other hand, the frontcourt is an out-and-out question mark. No one knows what to expect from the bigs or even who is going to play the majority of the minutes. If Michigan’s young bigs can’t get it done then it might not matter how good LeVert, Irvin and Walton perform. So I’ll go with the big three, but only because I have more confidence in the backcourt.

@colintj: What odds would you lay that this team finishes lower in KenPom than the previous four?

Michigan finished 26th, 23rd, 4th and 10th in KenPom’s final rankings over the last four seasons and if I had to put an over/under on Michigan’s final ranking this season I’d probably set it around 25.

On paper at this point, this team has a lot of similarities to those 2011 and 2012 teams. This group will experience some growing pains along the way, but could peak playing its best basketball by February and March.

@WolverineWay: What in your opinion will be the strength and weakness of #Squad99 ??

The weakness of this team is going to be up front, especially on the glass. The million dollar question will be how well can the Wolverines clean up the defensive glass and they are going to need players like Derrick Walton, Zak Irvin, Caris LeVert and Kam Chatman to all chip in.

The strength of this group has to be the backcourt. LeVert could be the best guard in the Big Ten this season and Derrick Walton and Zak Irvin are both poised for big years.