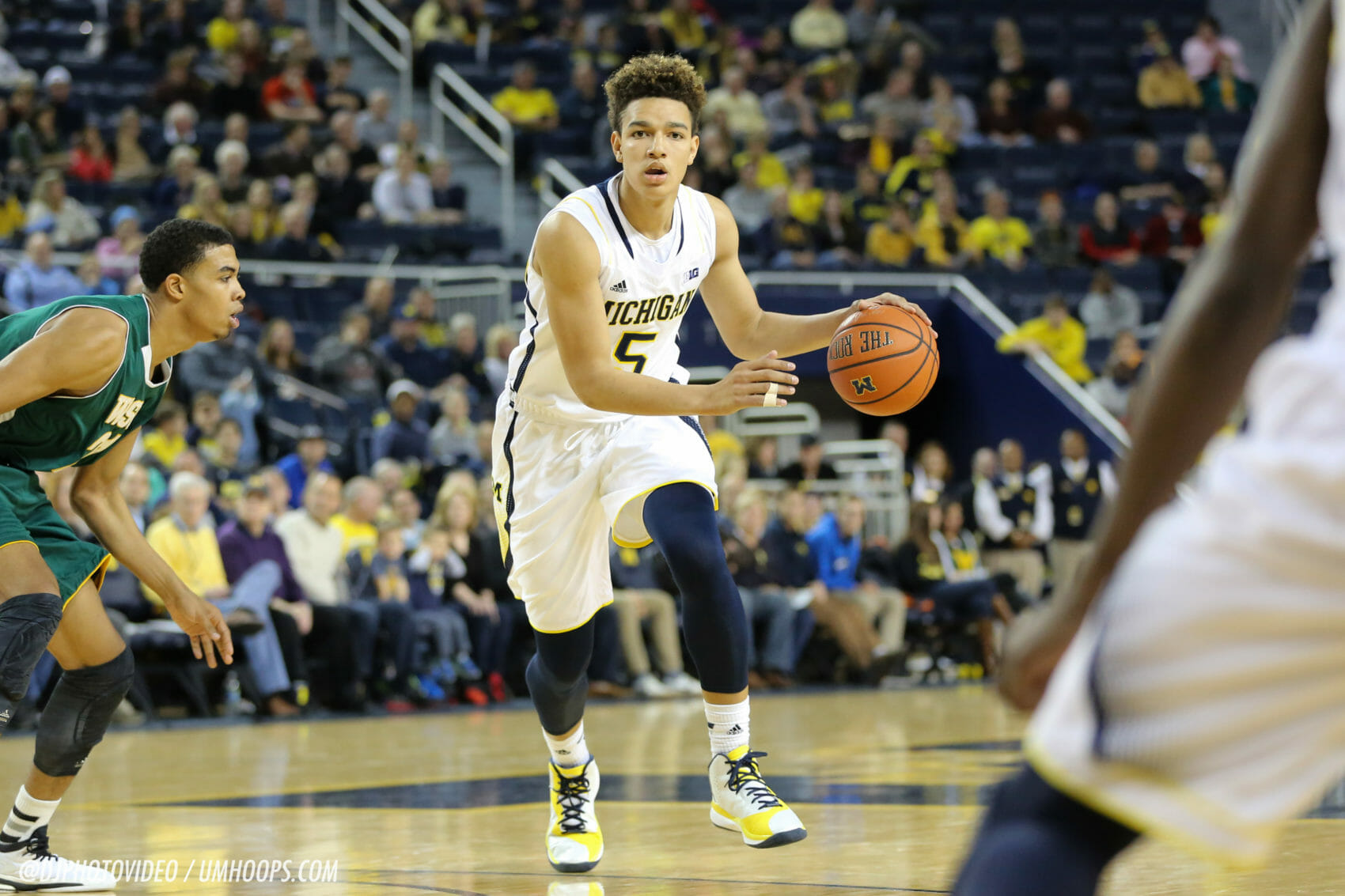 In Monday’s exhibition game against Wayne State, fans got a taste of all of the newcomers. And among those who impressed the most was DJ Wilson, who scored nine points, dished out two assists, grabbed a pair of rebounds and blocked a shot in just 15 minutes.

This may be Beilein’s most flexible team in his Michigan tenure, and Wilson epitomizes that versatility. He has a 7-foot-3 wingspan, making him a disruptive defender no matter his position, he can put the ball on the floor and drive to the basket, and he has a solid jumper.

Beilein has stressed that Wilson’s eventual position is at forward, but the 6-foot-9, 220-pound freshman will also see time at the ‘5’ this winter. Regardless of where he plays, he showed enough potential Monday and in open practices that it’s safe to assume he’ll feature heavily in the frontcourt throughout the year.

Though he struggled early, getting a shot blocked and then missing an open jumper, he improved as the game continued. Wilson helped on a ball screen and stuffed a shot at the rim, beat a defender for a lay-in, made an open corner three and dished out an assist on the pick-and-roll.

“D.J. is a really exciting player,” Caris LeVert said after the win. “It’s going to be tough (for opponents) guarding him and just knowing what to do against him.”

Wilson was the fourth member of Michigan’s 2014 class, choosing Beilein’s program over interest from Gonzaga, Columbia and USC, among several others. He was a consensus three-star recruit, but evaluations were limited because of a back injury that forced him to miss much of his AAU season after junior year.

At the time of his commitment in October, scouts raved about the combination of his jump shot and his size but warned he needed to become more aggressive and add weight in order to compete in college.

At 220 pounds, he’s probably too lanky to play at the five against the likes of Purdue’s A.J. Hammons or Wisconsin’s Frank Kaminsky, but he should be serviceable in most games as the third option at center.

“It changes us defensively immediately, because we can do a few other things that you can’t do with a traditional big,” Beilein said earlier this month. “So that’s been helpful, and his attitude about playing two positions has been absolutely terrific. He wants to get on the floor. He says, ‘Coach, I don’t care what position. I want to get on the floor.’

“He’s going to become a natural forward at one of the forward spots eventually, but right now, getting on the floor for him to give meaningful minutes anywhere he can. It may be major, it may be minor — we don’t know yet.”

Defensively, Wilson struggled with positioning in the exhibition, especially while playing the four position, but his wingspan and agility made up for some of the shortcomings. Still, that’s an area of concern that should slowly be rectified as the season progresses.

Some of the freshman’s shortcomings are a result of a broken pinky he suffered this summer that kept limited him for more than a month. Though Wilson traveled with the team to Italy, he couldn’t participate in any of the Wolverines’ four games and missed the practices before the trip.

That time off the floor while other freshmen were getting their feet wet in John Beilein’s offensive and defensive schemes certainly set him back, but he looks like he’ll have every opportunity to catch up.

In Monday’s exhibition, Wilson earned 15 minutes of playing time, and demonstrated that, through athletic talent alone, he will be a significant contributor for Michigan.

Bottom Line: The Wolverines have plenty of options in the frontcourt, and Wilson isn’t the top choice at any of the those positions – right now — but it appears that there will be times where he’s needed at both the four and five. Learning two positions as a freshman is difficult, but the fact that John Beilein is entrusting Wilson with the task means the head coach realizes he’s going to need Wilson’s versatility sooner than later.