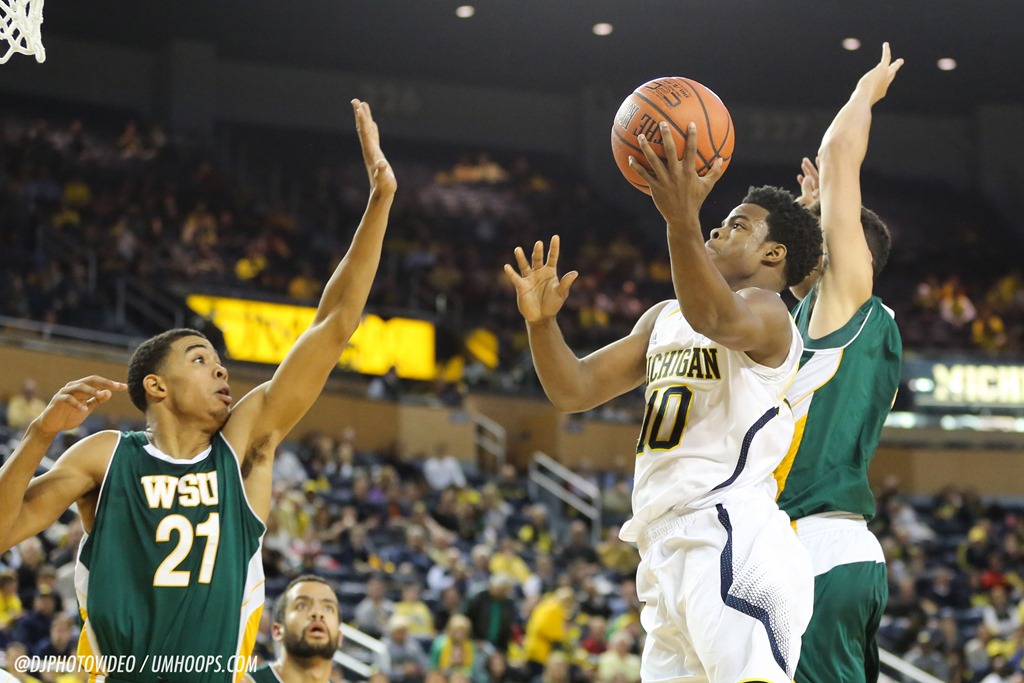 For the third consecutive year, Michigan will open the season by raising a banner to the Crisler Center rafters on Saturday before taking on Division II Hillsdale College.

Hillsdale is no stranger to facing Division I teams, but should be over-matched even against a young and inexperienced Michigan team.  Last year, the Chargers took a 13-2 lead at Assembly Hall in an exhibition game before the Hoosiers stormed back with a 51-15 run. In 2011, Hillsdale also played a Division I foe, traveling to the Breslin Center to face Michigan State.

Like Michigan, the Chargers are also entering something of a rebuilding year after losing Tim Dezelski, a 6-foot-6 forward who averaged 23 points, 10 rebounds and four assists per game last season.

Only two starters return for the Chargers including junior guard Kyle Cooper, who averaged 13.5 points per game last season and Zach Miller, a point guard who averaged three assists per game. Seven-footer Jason Pretzer is expected to anchor the middle, but he only averaged eight minutes per contest last season. He’ll be joined down low by 6-foot-7 junior Rhett Smith.

The 229 days since Aaron Harrison’s buzzer beating three have felt long as the Wolverines have reshuffled their roster and traveled to Italy, but the season is finally here. This young Michigan team is set to play six games in the next two weeks and are certain to grow up in a hurry. Here’s what we’ll be watching for on Saturday.

Derrick Walton had a quiet night in Michigan’s exhibition, finishing with 11 points on 2-of-6 shooting and without an assist. The Wolverines didn’t need Walton to take over, but he seemed content to defer just a bit.

His stat lines in Italy read in a similar fashion and he very much looks like a player searching for his role within the offense.

Beilein has urged Walton to be more aggressive throughout the offseason. He’s deemed Walton as part of his quarterback club and reiterated that the ball will be in his hands to run the offense. Walton has generally been an efficient player throughout his time at Michigan, but it’s time to see where he fits within the scope of Michigan’s team.

Scoring isn’t the most important statistic for Walton, especially against a team like Hillsdale, but pay attention to his assist totals and his aggressiveness in using the high ball screen.

Zak Irvin, Caris LeVert and Derrick Walton all have a proven track record as three-point shooters, but it will be interesting to see how the freshmen shoot the long ball during their second game in Crisler.

Kameron Chatman and Muhammad-Ali Abdur-Rahkman both missed their first three-point attempts long, perhaps a sign of nerves, while Aubrey Dawkins hit two threes late after a tentative start to the game. Chatman bounced back with a smooth looking three-point stroke trailing on the secondary break while DJ Wilson also hit a three after missing his first few jump shooting attempts.

The three-point shot’s importance to Michigan’s offense needs no further explanation and the ability for Michigan’s frehsmen to knock down the three consistently could determine how much playing time they receive in the rotation.

Can DJ Wilson repeat his impressive performance? Do we see more from Ricky Doyle and Mark Donnal? How does Max Bielfeldt factor into the rotation after an impressive second half?

The big men will have everyone’s full attention once again, and probably will for quite some time. Hillsdale isn’t going to provide the most stringent of tests, but the Chargers do appear to have slightly more size than Wayne State.

Defensive rebounding will be critical to Michigan’s big men throughout the season, but watch how the bigs set screens during the high pick-and-roll. While both Donnal and Wilson had a couple of baskets off of ball screens, all of the bigs need to work on their ability to set hard screens. Mitch McGary and Jordan Morgan were both great screeners and it will take time for the bigs to build that chemistry with Michigan’s guards.

Playing the first of two games over a three-day span, Michigan won’t have time to sit around and soak in the start to the season. Hillsdale should provide a good warmup for what should be two more challenging games next week.