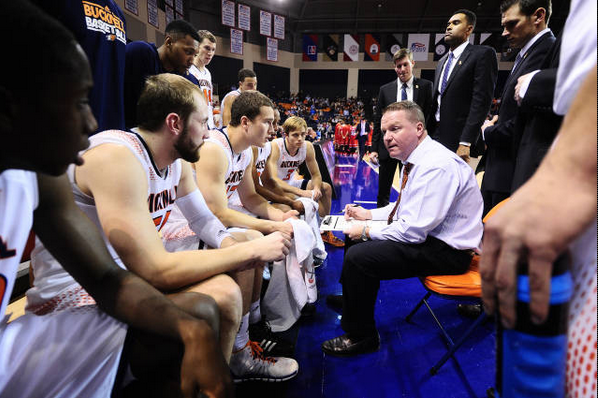 After a quick turnaround from Saturday’s season opening win over Hillsdale, Michigan will take the floor again this evening to host the Bucknell Bison.

Bucknell is led by head coach Dave Paulsen, who is entering his seventh season in Lewisburg. Paulsen’s resume is littered with connections to Michigan and its coaches and players.

He started his career as a graduate assistant at Michigan for Steve Fisher during the 1989-90 season. He then he came up through the Division III ranks, coaching at St. Lawrence and Le Moyne before making his mark at Williams College, where he won a Division III National Championship. That’s the same Le Moyne Dolphins  program that John Beilein coached five years earlier and the same Williams College that sent Michigan transfer forward Duncan Robinson.

Paulsen is known for his motion offense and his instructional videos, but he’s also been successful on the court. He’s taken the Bison to the NCAA tournament in two of the past four seasons, but is looking at something of a rebuilding year in 2014-15.

Bucknell lost three of its three rotation players, including leading scorer Cameron Ayers, from last year’s team, which finished the season at 16-14.  While the Bison lost some key pieces, they still have a fair amount of depth and experience. In their season opening win over Marist, eight players saw at least 18 minutes of game time and five players reached double figures, three of whom came off the bench.

Paulsen’s offenses at Bucknell have done two things consistently: control the tempo and value the basketball.  The Bison have routinely ranked in the top-third of Division I in offensive turnover rate and the bottom-third in tempo. Bucknell generally hasn’t been very reliant on the three-point shot, but has also been very efficient at making the threes it does take. The Bison haven’t emphasized offensive rebounding under Paulsen, but have been very good at creating and finishing open looks around the basket.

If forced to draw stylistic parallel to Bucknell’s defense in the Big Ten, Wisconsin looks like a good fit with strong rebounding, few turnovers and above-average eFG% defense without fouling. Of course, Bucknell isn’t Wisconsin, the Bison were just an 11-7 Patriot League team last season, but they should still provide a more formidable test.

Junior forward Dom Hoffman has been in the process of breaking out since the end of last season. Hoffman was inserted into the starting lineup in February of last year and the Bison promptly rattled off six straight victories, a streak that Paulsen credited to a bigger lineup. Hoffman is now a regular starter and averaged 17 points and 10 rebounds during Bucknell’s European tour before grabbing a team-high 14 points and nine rebounds in the season opener.

Hoffman is active on both backboards and should provide a difficult defensive challenge for Kameron Chatman, who struggled defensively in his first collegiate game on Saturday.

6-foot-5 guard Chris Hass is Bucknell’s leading returning scorer. The Pellston, Michigan native was named to the All-Patriot League third-team last season and is primarily a long-range shooter. He shot 40% from three-point range last season and 46% of his field goal attempts were from beyond the arc.

6-foot-9 freshman Nana Foulland is the first true freshman to start a season opener for Bucknell since 2009, but he was just 1-of-6 from the floor in his debut. Another Michigan native, 6-foot-8 senior Cory Starkey provides a unique skillset in reserve. Starkey tallied six assists in just 11 minutes of playing time against Marist.

Starting point guard Steven Kaspar is a two-time captain who scored 25 points in a win at Penn State last season. Kaspar posted the sixth-best assist rate in the country last season and also does a great job of getting to the free throw line. However, he’s not a great shooter, shooting just 44% on twos and 24% on threes for his career.

Bucknell won’t be the best team that Michigan plays in the non-conference slate, but the Bison are a major step up in competition from the teams that the Wolverines have faced this summer and fall. The Bison start four upperclassmen and playing against Big Ten competition won’t come as any surprise as they’ve won at Purdue and at Penn State over the last two years.

Are the Bison likely to pull the upset? Probably not, but I wouldn’t be surprised if this game was much closer than Ken Pomeroy’s projected final score of 75-60.