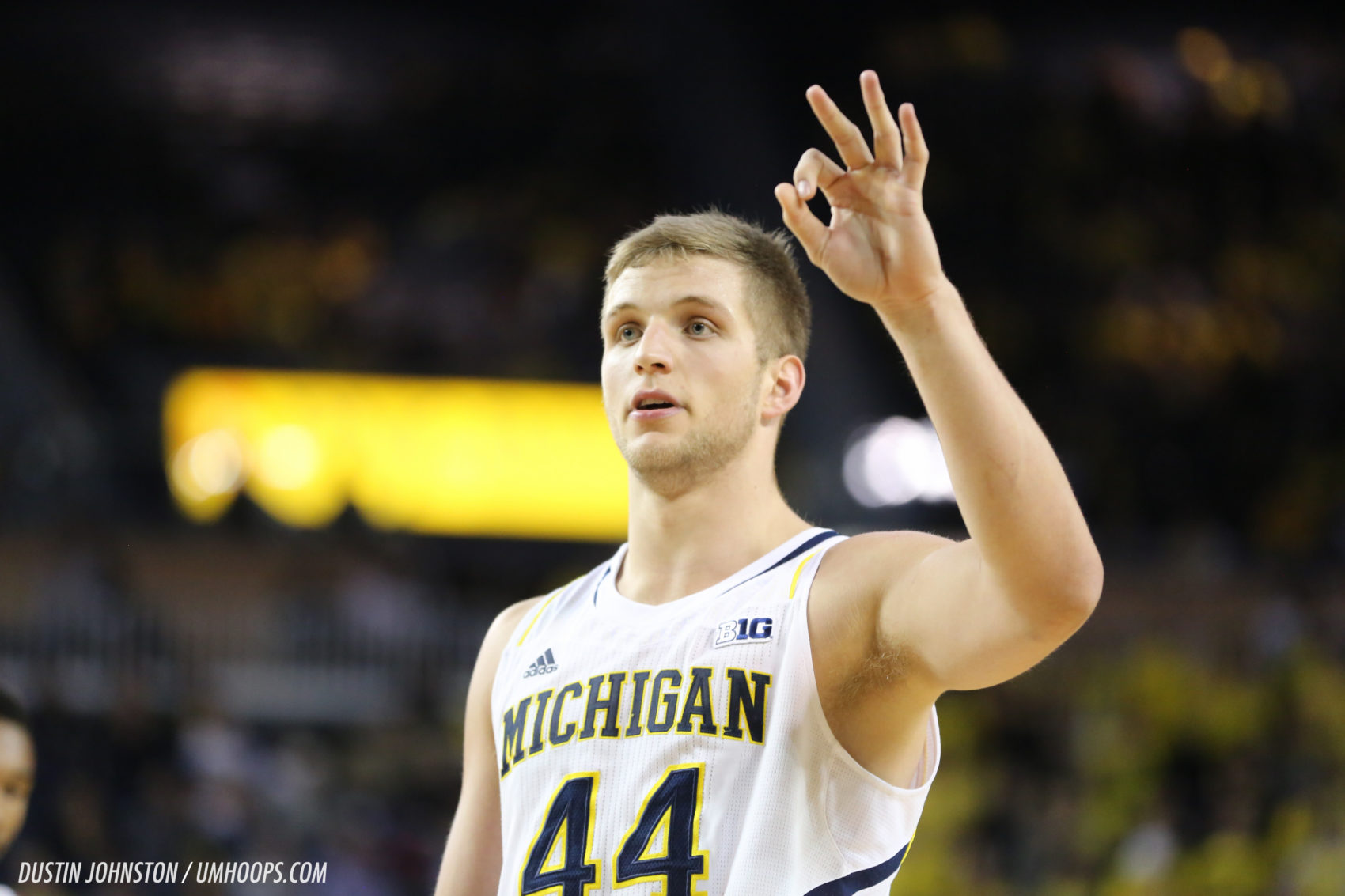 Max Bielfeldt wasn’t even in the conversation.

For the last six months we’ve picked apart seemingly every player and lineup combination that Michigan could feature. We wrote stories about returning stars, freshmen and returning stars. Bielfeldt’s name was mentioned only in passing, or when he underwent hip surgery.

He didn’t see the floor in Michigan’s season opener and it’s safe to say that more than a few eyebrows were raised when No. 44 got the call off the bench rather than Ricky Doyle or DJ Wilson.

Max Bielfeldt? The same player that managed just a 36% eFG% last season and recorded more than twice as many fouls as made baskets?

Bucknell freshman Nana Foulland appeared to feel the same way, immediately leaving Bielfeldt wide open for a pick-and-pop three-pointer from the top of the key. Then it went in. Then another went in. By the time halftime rolled around Bielfeldt had 13 points on 5-of-7 shooting. At the final buzzer Bielfeldt had a career high 18 points and had topped last year’s season totals of 15 points and six made field goals.

The 6-foot-7 Peoria native’s spark off the bench helped Michigan cruise to an easy 77-53 victory over Bucknell was never in doubt and added yet another layer to Michigan’s array of unproven frontcourt options.

Michigan’s offense was scalding hot in the first half, running out to 1.44 points per possession before cooling off in the second. The Wolverines shot 47% on twos and 44% on threes for a 52% eFG% on the night. Michigan turned the ball over on less than 10% of its offensive possessions for the second consecutive game and were also able to score 15 second chance points against what was the second-best defensive rebounding team in the country last season.

The Wolverines set the tone early on with their defense. Michigan recorded stops on Bucknell’s first five possessions and turned them into an early 10-0 lead. The start was just the opposite of the Hillsdale where Michigan came out flat and gave up a handful of easy baskets and starting quickly was an obvious focus for the Wolverines.

Beilein hinted the offseason that he wasn’t quite sure where this team would make its mark on defense. It’s only two games, but the Wolverines look like a team that could force more turnovers than any of Beilein’s recent groups. Bucknell gave the ball away on over a quarter of its offensive possessions and Michigan recorded seven steals. The more aggressive Michigan defense has also translated to easy offense, Bucknell’s 12 first half turnovers in 33 first half possessions led to 10 easy Wolverine points.

If it weren’t for a torrid five minute stretch by Chris Hass late in the second half, this would have been an even more impressive defensive performance. As it was, Michigan held the Bison to just .78 points per trip, controlling the defensive glass and holding Bucknell to just 30% three-point shooting and 46% two-point shooting. There were still some missed rotations and early season hiccups from a young team, but it was a clear step in the right direction just 48 hours after a disappointing defensive performance in the season opener.

Michigan’s big men all struggled at least once in one-on-one post-up isolations that resulted in either fouls or made baskets. The young bigs need to do a better job of using their lower body to force opposing big men out of the lane, but the fact remains that Michigan is almost always going to have to double-team the more skilled post-players on its schedule.

I questioned in the preview whether Bucknell could give Michigan a little more than it bargained for, but there was never any doubt in the outcome. Next up for the Wolverines is a Thursday night game against a Detroit team that is likely more talented, but less structured than the Bison.