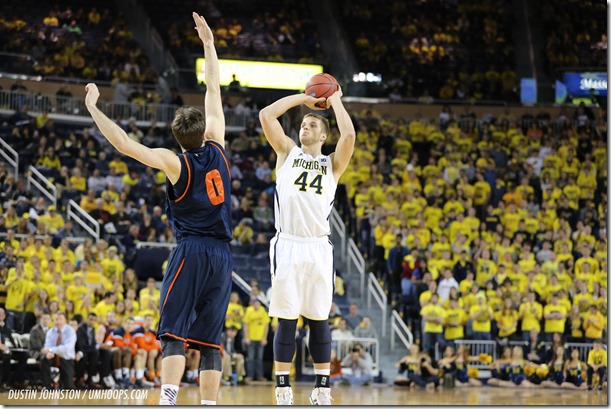 Entering as the first big man off the bench just three minutes into Monday night’s game against Bucknell, the senior made his presence felt immediately, knocking down an open three-pointer from the top of the key.

Less than three minutes later, he did it again, from the same spot on the floor.

By the time the first half had ended, Bielfeldt had tallied 13 points, more than tripling his previous game-high of four. He would finish the night with 18 points in 16 minutes.

“The last couple of days of practice, he has virtually been a man-child playing with our guys,” explained coach John Beilein. “He has just been very, very good.”

Bielfeldt’s surprising night was a welcome addition to the Wolverines’ offense. He scored more points Monday than he did in all of 2013-14 and also made as many three-pointers as he did last year.

“(Beilein) has seen what I’ve done in practice and stuff, and to finally be able to carry that over to a game situation is really exciting,” Bielfeldt said.

But as Michigan enters a more difficult part of its schedule, it’s clear there is still plenty of uncertainty regarding the team’s frontcourt.

There are question marks about Kameron Chatman, who struggled throughout his second start. The freshman forward is now a combined 2-for-12 from the floor in a pair of regular-season games.

There are a few more positives for Mark Donnal, who been solid as the starter at the five. But he could be a stronger defender in the paint and hasn’t established his jumper.

Freshman big man Ricky Doyle also showed some flashes with a nice hook shot and pick-and-roll finish, but he’s also still working to keep up with the pace of the college game.

And we saw almost nothing from Aubrey Dawkins on Monday. He played just five minutes.

“Maybe they miss the shot, or the ball slips out of their hands or they get a bad bounce,” Beilein said of the freshmen. “There’s other times that they’re just on tape delay, (as) I’ve said for years. There’s that one or two seconds that, ‘Oh, what’s happening next?’”

Then, of course, there’s Bielfeldt.  Bielfeldt is a 6-foot-7 senior and he’s probably not Michigan’s long-term solution at the five position. Besides, Beilein admitted that the senior wasn’t fit enough to play until “maybe 10 days ago,” since he had spent much of the offseason recovering from hip surgery, but he would get a chance to prove himself.

“I’d like to see this consistently in practice over and over again. We know that that’s been the issue,” Beilein said. “I think he had great confidence today. Sometimes, as a senior, that just happens. We’ll wait and see how it plays out. I won’t make be making any knee-jerk (reactions), but I assume he’ll be in the game with Detroit.”

Of course, it’s early, and there’s no use making knee-jerk reactions about Chatman, Wilson, Doyle or Dawkins after they’ve only played two collegiate games. And while there’s some time for experimentation in the early season, Michigan needs to find lineups that can win games now.

Right now, Beilein is clearly more comfortable with the experienced players on his roster. Junior captain Spike Albrecht, who played 29 minutes on Monday, is still his most trusted bench player. No freshman other than Chatman played more than 11 minutes in the game.

Even Michigan’s experienced players are still trying to figure out their roles. Albrecht, Derrick Walton and Caris LeVert have all shared various duties of the point guard position with Albrecht zipping passes across the floor, Walton pushing the tempo and LeVert executing pick-and-rolls.

Essentially the only role that is entirely defined is Irvin on the wing. The sophomore scored 23 points Monday, just one away from his career-high. It also marked the first time that he has tallied 20-plus points in consecutive games.

He just needs to keep shooting.

“He’s going to get a lot of looks,” Beilein said. “He has a Hardaway ability to get his shot off. And now we’ll continue to work to get him those shots.”

If Bielfeldt can reproduce Monday’s showing, the Wolverines might continue to find him looks, too.