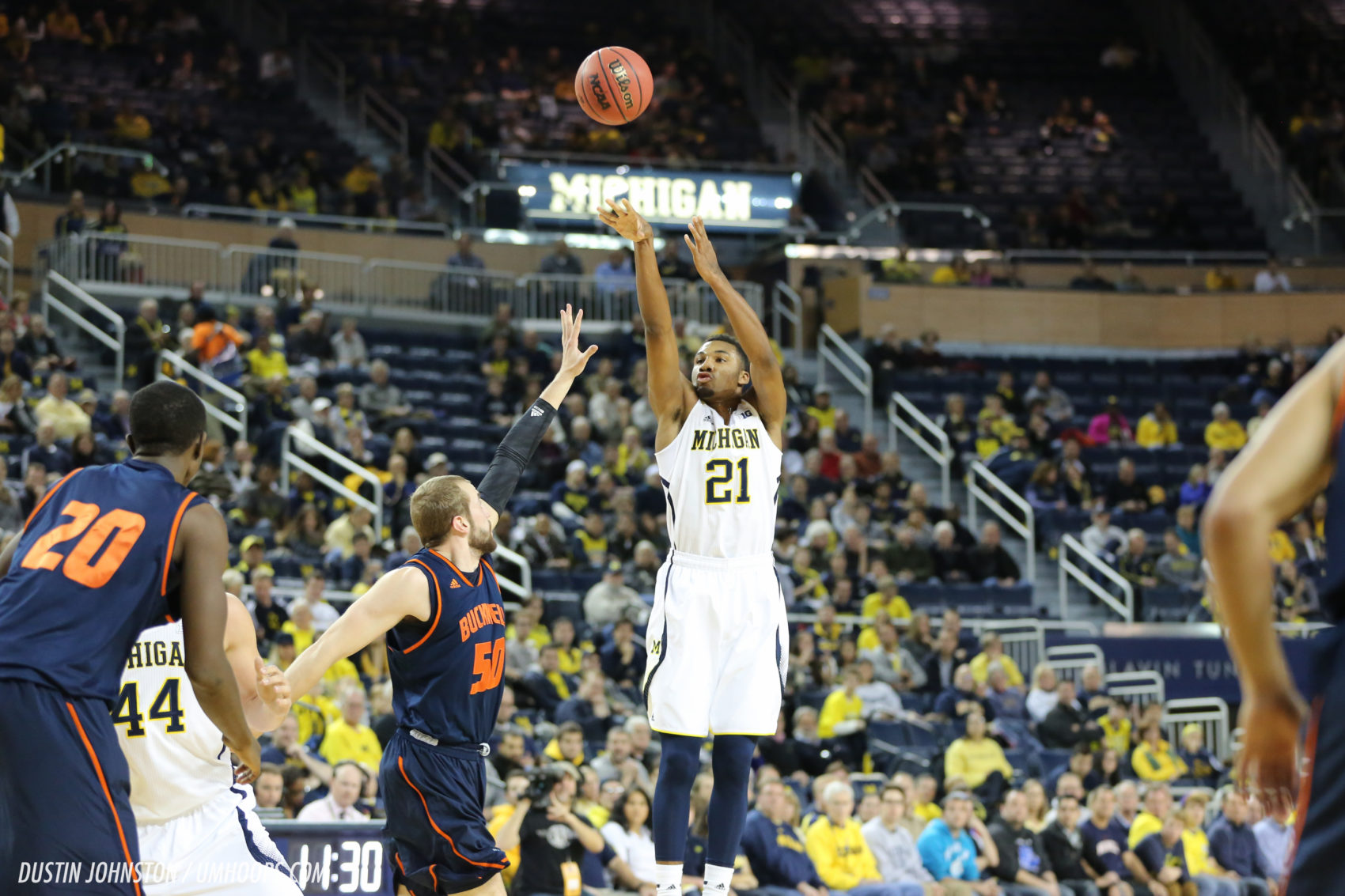 Zak Irvin is averaging 22 points per contest through Michigan’s first two games. He’s shooting 9-of-14 on twos and 7-of-11 on threes for a 78% effective field goal percentage.

His numbers through two games are not all too dissimilar to his statistics during Michigan’s Italian tour where he averaged 20.8 points per game with an 81.3 eFG%.

Against any competition, even against air, those shooting numbers are impressive. Irvin was locked in with his jumpshot last season, but now in a starting role he’s getting more shooting opportunities and making the most of them.

“I just want him to take open shots. He’s going to be a volume shooter, and he’s going to do it all year along,” John Beilein said after Michigan’s win over Bucknell..” And I’m sure he’ll have great nights, and I’m sure he’ll have some nights where he wished he’d made more. This is the way practices have been; this is the way it was in Europe. He’s going to get a lot of looks. He has a Hardaway ability to get his shot off. And now we’ll continue to work to get him those shots.”

The good news for Michigan isn’t so much that Irvin is making open threes, but that he’s becoming a more complete offensive player. Irvin hasn’t made a Nik Stauskas-type of jump into a primary ball-handler and creator, but here’s a look at how his points have been produced through two games and an exhibition.

This is the old Zak Irvin.

These plays should all look pretty familiar, because they are what we saw from Irvin last season. He was predominantly a catch and shoot player, waiting on the wings or the corners for an extra pass, or a tipped out rebound before quickly rising up and shooting over the opposition. Irvin is still a tremendous catch-and-shoot player and there’s no reason to expect that to change.

Last season there were jokes throughout the year surrounding the fact that people had rarely seen Irvin, at 6-foot-6, rise up and dunk. He answered those jokes with a big transition dunk against Michigan State, but he’ll probably have more dunks in the first five games this season than he did all of last year.

The key thing to watch in these clips is how hard Irvin runs the floor. Michigan does a drill in practice to emphasize getting down the court quickly off of defensive rebounds in transition and Irvin epitomizes the goal — getting down the floor in four seconds — in most of these plays.

This clip is a beauty to watch just to focus on Zak Irvin’s off ball movement. It’s one thing to catch and shoot from a stationary position, but Irvin has been excellent catching and shooting on the move.

Here we see everything from a basic pin-down curl to a fake backdoor cut followed by a pin-down and some nice down screens to free Irvin at the top of the key. Irvin does a great job of cutting to setup his screens and his elevation on his jumpshot makes finishing the play easy.

Some might still want to see more from this area of Irvin’s game, and I suspect we will as the season wears on, but he’s already shown progress of being more versatile and aggressive offensive player.

“Zak Irvin now, he only shot it when he had it last year. Now, it’s a different deal. He’s seeing the floor, he’s doing some good things, he’s driving down the lane, kick it in the corner,” Beilein said. “There’s a whole development going on. This is what teachers love, is to watch it — although it’s painful sometimes.”

The three examples in this clip are plays that Irvin has already made in two games that he wouldn’t make last year:

Zak Irvin is in the perfect position to have a monster season. He’s rarely going to be the first name on the opposition scouting report, yet he might lead the team in points and field goal attempts. Irvin doesn’t have to worry about creating offense for other players because Caris LeVert and Derrick Walton will handle that. John Beilein’s offense was designed to create shots for players like Irvin, who can pass, cut and finish all over the floor.

These clips are just the basics. Beilein has mentioned that the Wolverines are still behind in installing their offense and as they do the possibilities will be endless to get Zak Irvin the ball in positions where he can score.