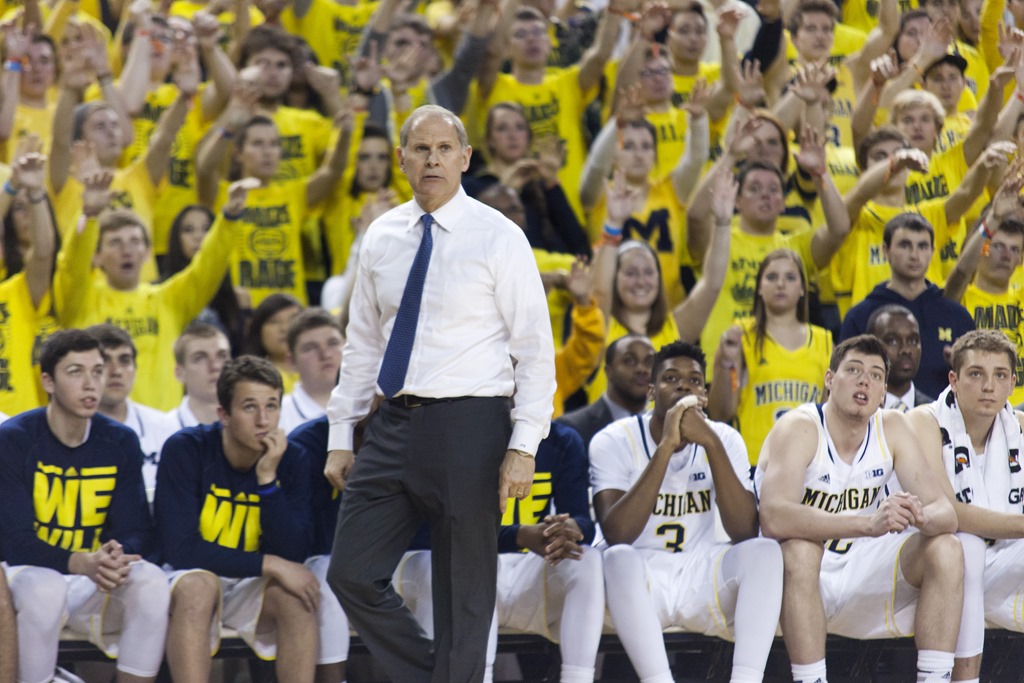 Learning on the job is good, but sometimes it’s better to sit and watch.

Michigan’s freshmen are all promising players, but trailing Detroit early in the second half, John Beilein had no choice. He went with his veterans.

Much has been made about the fact that Beilein only has five scholarship players on his roster that aren’t freshmen, but that doesn’t mean he can’t put them all on the floor at once. Spike Albrecht was inserted into the game just 67 seconds into the second half and he was followed shortly after by Max Bielfeldt, who didn’t even play in Michigan’s season opener.

. Derrick Walton played all 40 minutes while Caris LeVert and Zak Irvin both registered 38. Michigan’s freshmen combined for just 34 minutes of playing time, just eight in the second half, while Spike Albrecht and Max Bielfeldt tallied 32 and 20 minutes respectively off the bench.

But beyond the message, there’s a problem. Michigan’s freshmen are going to be critical to this team’s eventual success or failure, but they just aren’t ready yet. A win is a win, but it’s a troubling red flag that Michigan’s big three played 116 minutes and scored 55 of 71 points in a home game against Detroit. It’s troubling that Max Bielfeldt, who has led Michigan’s big men in points and minutes the last two games, still has to play on the scout team in practice because he’s the only player that can run the team.

Michigan hadn’t been held below 1.10 points per possession in a non-conference game at home since December 13th, 2011 against Arkansas Pine-Bluff (If you were wondering, Evan Smotrycz led the Wolverines that day with 16 points). There’s nothing magical about 1.10 points per possession, but it just goes to show how spoiled the Wolverines have been offensively over the last two seasons. There’s a very real chance that this team won’t be the best offense in the country this season.

Thinking back through the years, there’s always an adjustment period for Beilein’s offenses when they face their first dosage of pressure defense. Sometimes it results in a loss (UTEP 2010) other times it results in an awful half and requires a torrid comeback (Florida State 2013). But by season’s end, almost every Michigan team learns to deal pretty well with pressure defense.

Michigan continues to be lethal in transition, especially off of defensive rebounds, and the trio of Derrick Walton, Caris LeVert and Zak Irvin combined for 18 rebounds and a number of transition finishes at the rim or in the corner. The halfcourt offense, is much more of a work in progress. Walton and LeVert have only had the keys for a few games, but there were a few more stretches of confusion and over-dribbling than we’ve seen in a while.

Defensively, Michigan showed some signs that it can be a very good team. The Wolverines won this game on the defensive side of the ball – something I can rarely remember writing in game recaps last season. Ten consecutive stops – spanning 18:53 to 13:02  – were enough to turn the game and eventually let the Wolverines get back into control of the game in the second half.

The Wolverines held the Titans to just .95 points per possession overall and their only vulnerability defensively was the three-point shot. Detroit didn’t appear to be a good shooting team on paper, which probably explains why Michigan’s defense was focused on stopping the drive and might have given up a few extra looks. Michigan was also dominant on the defensive glass once again, rebounding 93.3% of Detroit’s misses on the game despite the fact that the guards continued to do the heavy lifting in that department. The Wolverines did a good job on the glass, but it seemed at times as if the Titans had so much respect for Michigan’s transition game that they conceded offensive rebounding opportunities to get back on defense.

Michigan can’t ride its five upper-classmen all season. The Wolverines need to get something out of their freshmen. While much will be made of the big men – DJ Wilson struggled and Ricky Doyle barely played – they were forced off the floor by Detroit playing what amounted to a five-guard offense. It’s not an easy adjustment to blow up all of the traditional switches and rotations against such a unique offense, especially on the fly (Beilein admitted he didn’t expect to see it in the post-game). The bigger concern in my eyes is that Michigan doesn’t have another guard off the bench and Kameron Chatman continues to struggle. If Muhammad-Ali Abdur-Rahkman and Aubrey Dawkins didn’t get on the floor in this game, they clearly aren’t ready yet and that’s a concern because by the end of the year Michigan is going to need one of them.

This wasn’t a great Detroit team and this certainly wasn’t a great performance for Michigan, but it’s still November. It’s only the third game of the season and just one of many steps in the process. This team has a long ways to grow and it’s just too early to rush to any snap judgments.

Next up for the Wolverines is Oregon at the Barclays Center. New York City has been something of a home away from home for the Wolverines of late (4-0 in the last two years), but Oregon just beat Detroit by 17 and will provide a similar test with great guard and wing play without much inside presence.