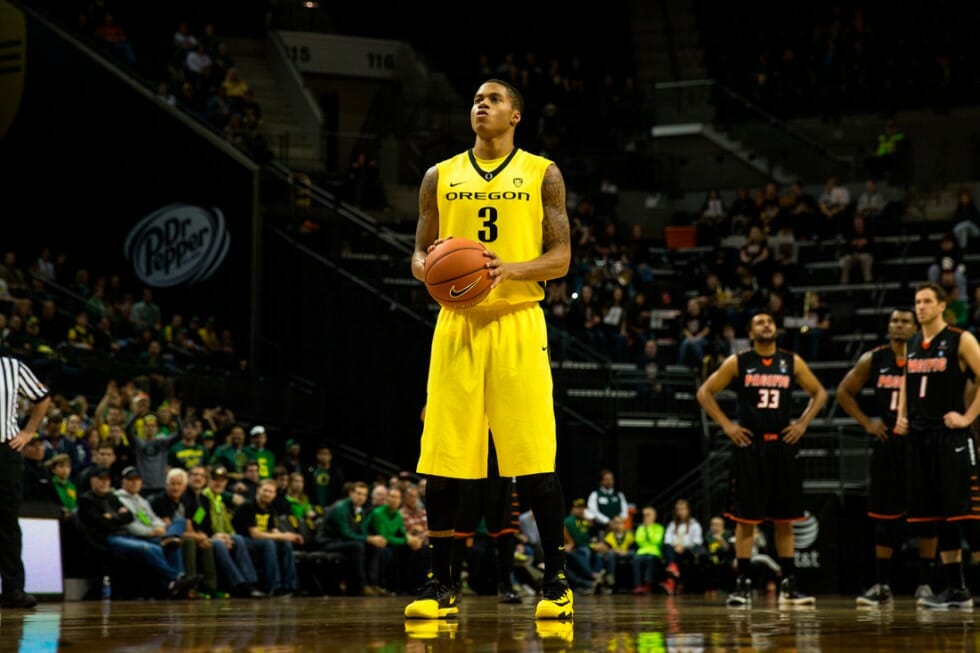 Eight months ago, Michigan and Oregon were both in the BMO Harris Bradley Center playing some of the most important basketball of their seasons. The Ducks had rattled off an impressive 24 win season and were getting set to face Wisconsin while Michigan would beat Wofford and Texas along its eventual path to the Elite Eight.

Both programs appeared to be trending in the right direction at the time, but now neither program looks the same. Much has been made about Michigan’s attrition – the Wolverines lost three players to the NBA, one to graduation and one to transfer – but Oregon lost ten players from its roster last season.

Dominic Artis, Damyean Dotson and Brandon Austin were dismissed from the team amidst sexual assault allegations. Starters Jason Calliste and Johnathan Loyd both graduated and two others, Ben Carter and A.J. Lapray, opted to transfer. Highly touted recruits Ray Kasongo and JaQuan Lyle weren’t admitted into school and two others, Elgin Cook and Jalil Abdul-Bassit, were charged with shoplifting but are still on the roster.

When you only have 13 scholarships to give, ten departures is almost unheard of, but despite all of the roster turnover and ugly headlines, the Ducks have hit the ground running this season. They blew out Detroit by 17 points after being tied at halftime and also beat Coppin State (107-65) and Toledo (78-68). Like Michigan, this will be the Ducks’ first game against high-major competition.

The first thing that stands out about Oregon’s statistical profile is tempo. The Ducks are averaging 71 possessions per game to open the 2014-15 season and have ranked in the top-75 nationally in pace for the last three seasons. Oregon had the 11th best offense in the country last season and is already showing signs of being formidable on that side of the ball this season. The Ducks tout a 54.9 eFG%, 15.4% turnover rate and 41.6% offensive rebounding rate through three games this season and have scored over 1.10 points per possession in each of their first three games.

Defensively, the Ducks do a terrific job of defending the rim. Oregon opponents are shooting just 32% inside the arc, but a sizzling 41% from outside. Perhaps that’s just a sign of early season play, as last year the Ducks did a great job of the defending the three-point line and were below average defensively inside the arc. Through three games, Oregon has been much better at avoiding fouls. The Ducks were ranked 302nd in defensive free throw rate last season, giving up 47.8 free throw attempts per 100 field goal attempts, but have improved their defensive free throw rate to just 23.5% this season.

6-foot-6, 206 pound forward Elgin Cook is averaging 12.7 points and 6.7 points per game and does most of his offensive work around the basket. One-time Michigan recruiting target Dillon Brooks is also averaging 12.7 points per game. The 6-foot-6 freshman was originally a member of the class of 2015 before reclassifying and enrolling a year early at Oregon. Cook and Brooks should both pose a unique challenge for freshman Kameron Chatman and also Zak Irvin, who has added significant strength to deal with match-ups like these.

6-foot-7 forward Dwayne Benjamin is a rebounding force, but he’s shooting just 33% on twos, 29% on threes and 36% on free throws this season. He platoons at the five position with Jordan Bell, a 6-foot-7 190 pound freshman, who averages nine rebounds per game off the bench. Bell is the better finisher inside (10-of-14 on twos), but both players have tallied high shot block totals in early games.

Freshman point guard Ahmaad Rorie has started from day one, but hasn’t been much of a scorer and is shooting just 29% on twos and 30% on threes. Jalil Abdul-Bassit is one of Oregon’s few returning players. He barely played last season, but is a career 43% three-point shooter and has to be respected from the perimeter.

Beilein is 2-0 in his career against Dana Altman with wins over Creighton in 2005 at West Virginia and 2009 with Michigan. Ken Pomeroy projects Michigan to come away with a 71-69 win in a 68 possession game. Next up, the Wolverines will face the winner or loser of Villanova/VCU (7:00 p.m.) on Tuesday night.