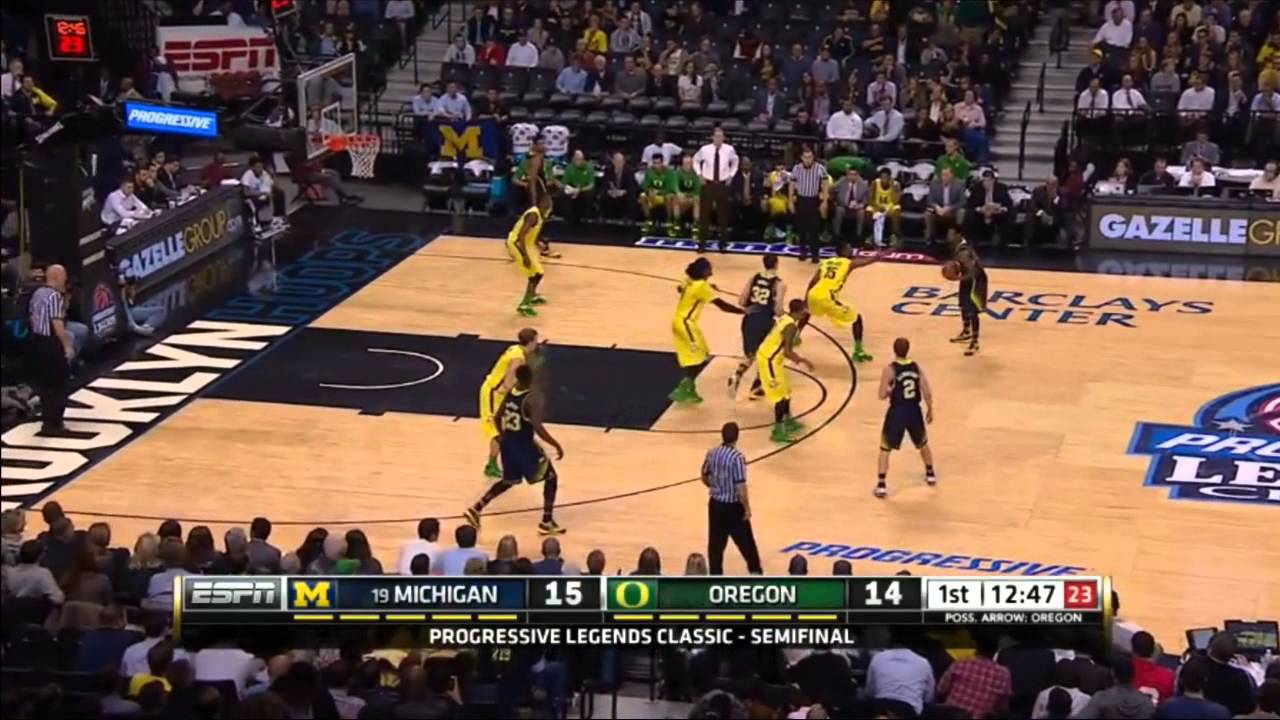 Michigan never trailed Monday night at the Barclays Center, but it needed a late run to survive a stiff challenge from Oregon. Here are Five Key Plays from the Wolverines’ win in the Progressive Legends Classic semifinal.

Michigan never trailed Monday night at the Barclays Center, but it needed a late run to survive a stiff challenge from Oregon. Here are Five Key Plays from the Wolverines’ win in the Progressive Legends Classic semifinal.

Zak Irvin finished with a team-high 19 points, and he did significant damage in the first half. At the 16-minute mark, the forward connected on his first three-pointer of the game, taking a feed from Kameron Chatman and firing over Joseph Young. Three minutes later, Irvin’s long-range threat forced Oregon’s Elgin Cook to overplay him in the corner, so the sophomore blew by him on the baseline for a dunk.

Irvin’s last bucket of the opening frame was a product of his improved athleticism. He received a pass from Spike Albrecht outside the three-point arc, stepped by Dillon Brooks and then finished with a finger roll around Cook to put Michigan up five.

Because of foul trouble, the Wolverines got just seven first-half minutes and no points out of Derrick Walton. The guard committed his first infraction less than a minute into the game, bumping into Joseph Young while trying to work around a screen, and was immediately substituted out. John Beilein reinserted him four minutes later, but Walton picked up a blocking foul with 8:20 to go until halftime. At that point, it was also just Michigan’s second team foul.

The two fouls meant Walton — who didn’t score his first points until after the break — sat until halftime, a decision John Beilein called a “no brainer.” Albrecht filled in well, though, helping the Wolverines outscore Oregon, 12-9, from the 8:20 mark until the half.

Ricky Doyle was always considered to have the best inside presence for the Wolverines, and he finally demonstrated that Monday night in a 10-point performance. He was particularly dominant at the end of the first half, when he scored five points and recorded a block in a span of just three minutes.

At the 3:49 mark, Caris LeVert lobbed to Doyle in the lane, and the freshman made an athletic grab over Brooks before finishing a layup through contact. This was the play the made John Beilein realize his freshman could be in for a big performance.

“He finished a little lob pass, he finished I think it was a three-point play and he finished that in a crowd,” Beilein said. “And I said ‘alright, now we’ve got something’ because it was a big time play and they have a great shot blocking team and he took it right through their chin and finished it.”

On the next defensive possession, Doyle swatted away a Cook layup by recognizing the forward’s drive to the basket and providing good help defense for Irvin. Then, he forced Jordan Bell into a difficult shot in the paint, which he airballed, and capped off his impressive stretch with a tip-in bucket. Michigan big men have really struggled with post defense early on this season, but this was an excellent example of what Michigan wants from its big men defensively.

As Beilein noted after the game, the Ducks’ athleticism allowed them to switch on every ball screen Monday night. That strategy essentially eliminates the roll man, but it allowed Caris LeVert to have a big game.

Down the stretch, Michigan’s offense evolved into isolation sets for Caris LeVert after the switch. With three minutes to play, the Wolverines used a ball screen to get LeVert a matchup with Jalil Abdul-Bassit, then isolated Oregon’s reserve guard. LeVert drove to the basket and scored an acrobatic layup through a hard foul. LeVert had struggled to finish all game, but finally got an and-one layup to fall.

From a similar set just 90 seconds later, Walton dished to LeVert, and the sophomore guard made a cut near the paint. Oregon was clearly overplaying LeVert’s drive which left Irvin open on the wing to knock down the three.

“We had forced a couple before that,” Beilein said. “Caris had blown up a play for Zak and Zak had blown up a play for Caris. That time they were like chemistry together. We were looking to get the mismatch. They switched every ball screen there was tonight. Every one. You’re not going to see that that much, but they had the athleticism to do it.”

It was a move you usually don’t see from a true freshman who has received limited action as the backup center. With less than a minute remaining and Michigan up just three, Doyle boxed out Abdul-Bassit to grab an offensive rebound. Surrounded by three defenders, the center used a power dribble to get under the basket, got Cook to bite on a pump-fake, then buried the putback to extend the Wolverines’ lead to five with 37 seconds to play.

The Ducks missed a three-pointer on the ensuing possession, and Michigan hit a pair of free throws to escape, 70-63, and earn a berth in the Legends Classic final as chants of ‘Ricky Doyle’ echoed through the Barclays Center.