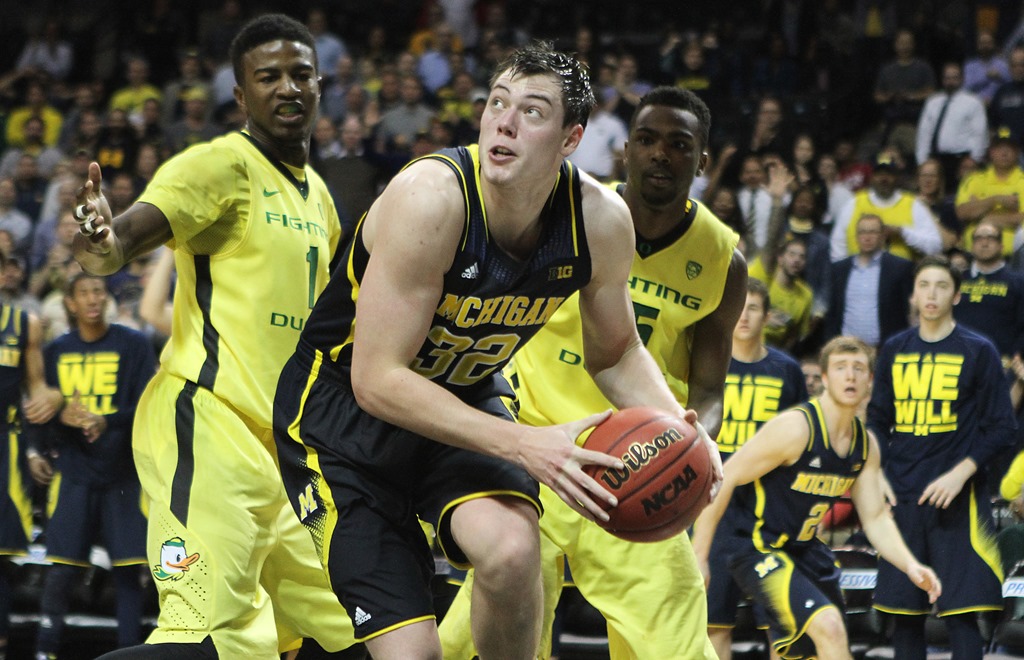 For this young Michigan team, freshman mistakes are a necessary evil.

Against Detroit on Monday, Michigan head coach John Beilein swept those mistakes under the rug by sitting his young players and riding his five experienced players down the stretch.

But the reality of the situation is that hiding the freshmen will never work, especially not when the schedule mandates playing two games within 24 hours. Freshmen are going to be key to this team’s success and have to start growing up on the job sooner than later.

Beilein threw caution to the wind on Monday, throwing his young players into the mix and seeing what came back. Eleven different Wolverines saw playing time in the first half and Michigan scored 19 points off the bench. The resulting performance featured plenty of freshman mistakes, but it was also a win and another step in the right direction.

On both an individual and team level, Michigan looked great for stretches and completely out of sync for others. There were plenty of freshman mistakes – poor positioning, missed blockouts, errant passes and weak finishes – but there were also encouraging steps of progress. The ups and downs led to a game where Michigan always felt in control, but never could pull away. The Wolverines extended the lead to eight points midway through the second half, but Oregon was always there to make enough plays to stay within arm’s reach.

Locked in a one possession game inside of four minutes, it was a freshman that finally sealed the deal. Ricky Doyle pulled down an offensive rebound with 43 seconds remaining and then managed to go up strong and complete the play. Doyle’s bucket extended Michigan’s lead to five points and cemented his best performance as a Wolverine.

Michigan’s experienced stars did most of the heavy lifting – Zak Irvin and Caris LeVert combined for 37 points – but at the end of the day it was a freshman that got Michigan over the hump in its best victory yet.

Michigan’s offense didn’t play its best game, but it still managed 1.13 points per trip. The key for the Wolverines wasn’t three-point shooting as it so often is, instead it was the ability to get to the free throw line against an Oregon defense that just couldn’t stop fouling. The Wolverines managed a free throw rate of 63% and actually shot more free throws (24) than field goals (20) in the second half. Oregon was whistled for 24 fouls in 40 minutes, including 17 in the second half – or one per 71 seconds of second half game clock. Michigan was unfazed by Oregon’s token pressure, turning the ball over on just 13% of its possessions, and shot 49% on twos and 38% on threes for a 51.1 eFG%. Michigan’s pick-and-roll game faltered a bit due to Oregon switching every ball screen on the perimeter, but the Wolverines were eventually able to exploit those switches and just attack the rim.

For the first time this season, Michigan’s defensive rebounding was exposed – badly. John Beilein quipped that, “there’s not too many times you win a game giving up 18 offensive rebounds,” and he couldn’t be more right. The Wolverines escaped despite getting pounded on the offensive glass. Oregon rebounded 18 of its 40 missed shots and scored 17 second chance points. Dillon Brooks led the way with five offensive rebounds, but overall the Ducks just outworked Michigan for many second chances. Michigan’s five-men managed just one defensive rebound for the game, but there was plenty of rebounding blame to pass around on the roster. The poor defensive rebounding took away from what was otherwise a very good ‘first shot’ defensive performance from Michigan, who slowed down Oregon star Joseph Young. Young’s 20 points were deceiving as most were late free throws and he was just 5-of-16  from the floor with three assists to four turnovers.

There are still plenty of warts and flaws for Michigan to mend. The Wolverines are far from perfect, but it’s always preferable to grow from a win than a loss. With less than 24 hours of prep time for a game against a well-coached and experienced Villanova team, Michigan could be in for a big test. Caris LeVert (39 minutes) and Zak Irvin (38 minutes) were both afforded very little rest and the young Wolverines will have to prepare quickly in a short scout. Tip-off for Tuesday’s Legends Classic Championship is scheduled for 10:00 p.m. eastern on ESPN2.