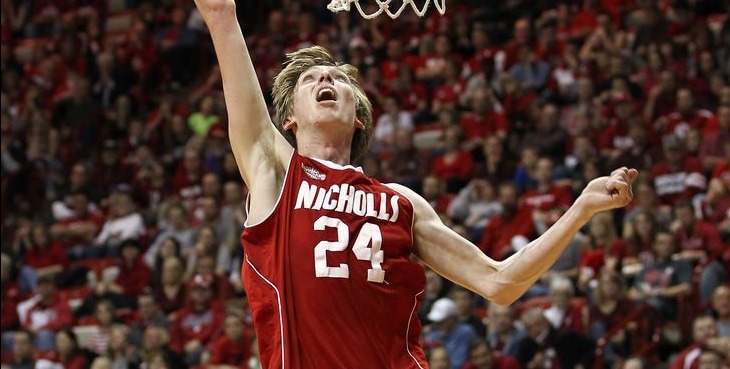 After two difficult tests in Brooklyn and a short break for Thanksgiving, Michigan will host Nicholls State on Saturday afternoon at the Crisler Center.

After two difficult tests in Brooklyn and a short break for Thanksgiving, Michigan will host Nicholls State on Saturday afternoon at the Crisler Center.

Most Wolverine fans will be focused on the noon football game in Columbus, but the Wolverines and Colonels will tip off shortly after at 4:00 p.m.

Nicholls State is sandwiched between the Legends Classic and Tuesday’s big home game against Syracuse. Any game in the middle of two higher profile games generally gets flagged as a trap game, but the Colonels are one of the worst teams on Michigan’s schedule this season – entering Saturday with a KenPom ranking of 323.

The Colonels enter Saturday’s contest with an 0-3 record after losing  at North Texas (71-57), UCLA (107-74) and Wake Forest (75-48) and still have to travel to Wisconsin and Louisiana Tech this winter before starting Southland Conference play, where they are picked to finish eighth out of 13 teams.

Nicholls State wants to play fast and force turnovers. The Colonels are averaging 71.9 possessions per game, making them the 22nd fastest team in the nation. Nicholls State ranks in the bottom third of Division I in nearly every relevant statistic other than forced turnover percentage. The Colonels are forcing their opponents to give the ball away on 22.8% of their offensive possessions, 65th best in D1.

While the Colonels can force turnovers with the best of Division I, they struggle to do much else. Nicholls State ranks 346th in free throw rate allowed, surrendering 64 free throws per 100 field goal attempts, and 345th in defensive rebounding rate, allowing its opponents to rebound 45% of their misses. Michigan struggled for parts of Tuesday’s loss against Villanova’s pressure defense, but eventually the Wolverines figured things out and started picking apart the Wildcat defense. Nicholls State will provide a nice follow up test, but things could get out of hand quickly once Michigan figures out the Colonel defense.

Offensively, Nicholls struggles in all four factors. The Colonels have managed just a 43.3 eFG%, 21.9% turnover rate, 21.6% offensive rebounding rate and 27.5% free throw rate. Nicholls appears to be an awful shooting team, shooting 46.1% on twos, 25.4% on threes and just 51% on free throws. Nicholls’ best offensive performance of the season was .95 points per possession at UCLA, which came in a 107-74 loss. The Colonels lost their top two scoring options from a season ago and have struggled to create momentum on the offensive side of the ball as no rotation player has an offensive rating over 100.

Ten different Nicholls State players average between 10 and 31 minutes per game, but only one has managed to average double figures in the points column.

T.J. Carpenter leads Nicholls State in rebounds and assists,but he’s shooting just 42.8% on twos and 15% (3-of-20) on threes. To his credit, the 6-foot-4 guard is one of the most turnover averse players on the roster, giving the ball away on just 11% of his possessions.

Amin Torres is Nicholls State’s lone double-digit scorer, averaging 11 points per game in just 16 minutes per game. Torres is a high-usage player when he’s on the floor, using nearly a third of Nicholls State’s possessions, and over half of his field goal attempts have been threes. He’s shooting 46% up on twos, 47% on threes and has only attempted two free throws this season.

Liam Thomas is Nicholls’ only rotation player taller than 6-foot-7. The 6-foot-10, 195 pound big man is also the most efficient player on the roster with an offensive rating of 97.6. Thomas is a top-100 shot block and he shoots 57% on twos.

Richie Lewis might be a familiar name to fans of local prep basketball. Lewis was a standout at Flint Northern before playing a season at Oakland Community College last season. Lewis is one of the best ball-hawking defenders in Division I and his 6.6% steal rate ranks 14th nationally.

Ken Pomeroy projects a comfortable 80-56 Michigan win. This is one of Michigan’s three remaining ‘guarantee games’ and the Wolverines should be expected to cruise comfortably. Ideally this will be a chance to provide some quality minutes to Michigan freshmen to prepare them for Tuesday’s Big Ten-ACC Challenge face off with Syracuse.