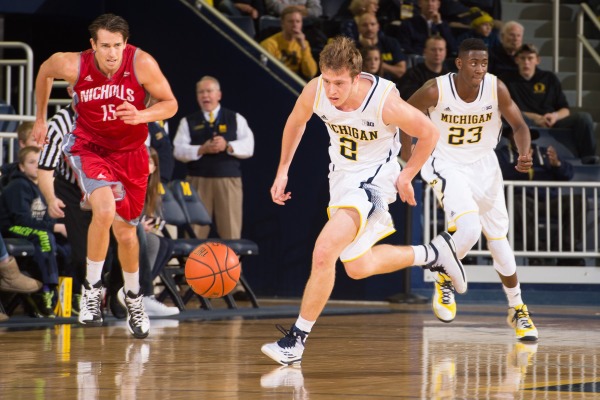 Michigan was without starting point guard, Derrick Walton, but had no problem dispatching an overmatched Nicholls State team on Saturday afternoon.

Michigan was without starting point guard, Derrick Walton, but had no problem dispatching an overmatched Nicholls State team on Saturday afternoon.

The Wolverines outscored the Colonels by 33 points in the first half and the outcome of the game was never in doubt as Michigan cruised to a 91-62 victory. Caris LeVert paced Michigan with 24 points and six assists, but he had plenty of help.

While LeVert was dominant, Michigan had its most balanced scoring output of the young season. Five Wolverines reached double figures with Ricky Doyle (15 points) and Kameron Chatman (11 points) notching career highs. Zak Irvin also added 14 points for the Wolverines while Spike Albrecht added 10 points and seven assists in the second start of his career.

Michigan reeled off its best offensive performance of the season at 1.41 points per possession in the dominant victory. The Wolverines were uncharacteristically sloppy with the ball, turning it over on 20% of their offensive possessions, but dominated the other four factors.

Michigan shot 53% on twos and 58% on threes for a sizzling 67.2 eFG%. The threes were falling from the opening tip-off and Muhammad Ali Abdur-Rahkman (0-1) was the only Wolverine to shoot worse than 50% from long distance on the night. This was also the best offensive rebounding performance  of the season for Michigan, which grabbed 48% of its misses and scored 11 second chance points.

Beilein noted that some offensive correction was inevitable because it’s tough to hold a team to 20 points in a half twice, but Nicholls State scored 42 points in 32 second half possessions (1.32 PPP) – one of Michigan’s worst defensive halves of the season. Much of that production came against Michigan’s younger players – starters played a maximum of 13 minutes in the second  – but there were plenty of teaching moments down the stretch.

Michigan is in the middle of a stretch where it will play four games in eight days and next up is a difficult test against Syracuse. Syracuse already dropped a game against Cal this season, but Jim Boeheim’s zone defense is a tough challenge for any team early in the season.