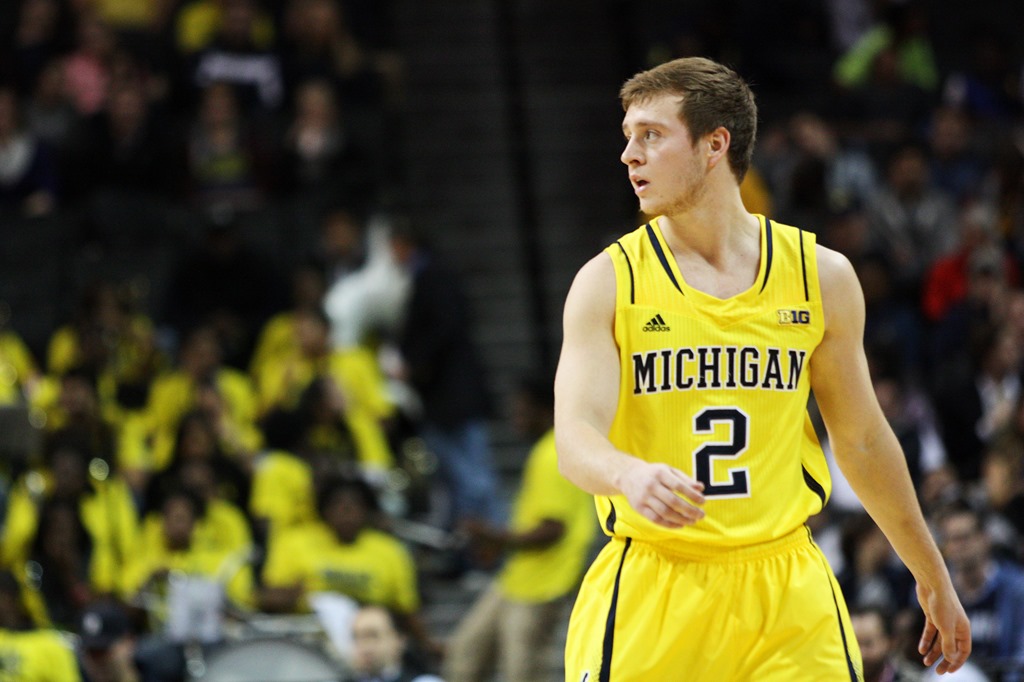 The Michigan basketball team might be without guard Derrick Walton in Tuesday’s ACC/Big Ten Challenge game against Syracuse, but the Wolverines won’t be without a lack of experience against the Orange.

The Michigan basketball team might be without guard Derrick Walton in Tuesday’s ACC/Big Ten Challenge game against Syracuse, but the Wolverines won’t be without a lack of experience against the Orange.

If Walton — who is nursing a toe injury and will be a game-time decision — can’t play, point guard duties will rest primarily on junior Spike Albrecht, a key contributor in Michigan’s Final Four win over Syracuse in 2013. Even if Walton dresses, coach John Beilein warned he might only get a handful of minutes in relief of Albrecht.

“We’re not going to push him one bit,” Beilein said of Walton.

That would leave Albrecht alongside junior Caris LeVert as the lone veteran options in the backcourt as the Wolverines try to pick apart Syracuse’s stingy 2-3 zone.

“Just making sure you’re not getting complacent,” Albrecht said. “I know they want you to just pass the ball around and chuck up a bunch of threes, but we have to make sure we find ways get into the paint. The biggest thing is getting stops where you can get out in transition before they set up, because they do a really good job with that zone.”

The three-pointer might not be such a bad option, though. The Wolverines are shooting 44.5% from long range. Albrecht, Walton, LeVert and sophomore Zak Irvin are all hitting better than 40% of their attempts from deep.

Against the Orange in 2013, three-pointers were Albrecht’s specialty. He was a perfect 2-for-2 from long range that night, helping Michigan to an 11-point halftime lead. His second attempt of the night came with the shot clock winding down, as the then-freshman fired with his heel inches away from the Final Four logo at midcourt.

But Albrecht isn’t that type of role player anymore. This season, he has 23 assists to just five turnovers and has added seven steals in averaging 28.5 minutes. And the Wolverines will need that complete package from Albrecht to score a win over Syracuse.

“My role is a little bit different knowing that I’ll be in there for long stretches,” he said. “Usually, I go in there and try to bring energy for short periods of time, like little bursts. Now, just try to maintain that and translate my role to more a leader and kind of calm my style out there.”

Freshmen in the spotlight

Chatman responded by recording a career-highs in points (11) and rebounds (8); Dawkins knocked down a three and got to the basket with a eurostep for a bucket; and Abdur-Rahkman got some experience at point guard during his 12 minutes. Doyle is averaging 20.7 minutes, 9.7 points and 3.7 rebounds per game over the Michigan’s three games, doubling his averages over Michigan’s first three games of 6.7 minutes, 4.7 points and 1.7 rebounds

But Syracuse will present a far greater challenge. Besides facing a Syracuse’s length and legendary 2-3 zone, Michigan’s freshmen will also be tasked with managing their emotions during their first marquee game at Crisler Center.

“The challenges are unique,” Beilein said. “All right, what are you going to be like at home in a big time game with a sellout? You could really play well, you can get too pumped up. It’s one thing going on the road, which we’ll do at Arizona soon. But being home, that’s always a big challenge for everybody.”

Beilein said center Ricky Doyle and Chatman have grown “right in front of our eyes.” Chatman buried the first two three-pointers of his college career against Nicholls State, while Doyle has commanded the majority of minutes at the five.

Part of tomorrow’s focus with all the freshmen, Albrecht said, is making sure they stay smart offensively.

“Have a little bit more patience, try and work the ball around, things like that,” the guard said. “Try and find some open shots instead of taking the first decent or good look. Make the extra pass.”

LeVert said it took time to adjust to the 2-3 zone at game speed when Michigan faced Syracuse in 2013, and the guard said he’ll take an active role in smoothing the learning process for the freshmen.

“You definitely want to talk to them and tell them to be kind of cautious, because the zone is definitely longer and quicker than you might expect,” he said. “At the same time, just still be aggressive, and just take your shots when you feel that you have them.”

Wolverines prepared to be physical, could play two bigs

In Michigan’s only loss this year, a 60-55 defeat to Villanova last Tuesday, the Wolverines had a difficult day in the paint.

Though they rebounded 75% of Villanova’s misses, Michigan got into foul trouble early in the second half, a significant factor in the Wildcats’ late-game push. Facing another long, athletic team in Syracuse, the Wolverines know to be prepared for a battle.

“The Oregon, Villanova games were tremendous for us,” Beilein said. “When you’re really battling against higher-level athletes, it really sends the message home about some of the details of the game. We promised them, when they came in, that college basketball was going to be a more physical sport than any basketball they’d ever played. It sort of brings it all home. Villanova was very — and legally — very physical with us, and that was a great reminder for us.”

Michigan may counter the Orange’s size with some of their own. Beilein said playing two bigs is a possibility, though it’ll be “difficult” since that’s where the Wolverines are most inexperienced.

“That could happen,” he said. “In some situations, we could do that. With Syracuse playing 100% zone, that’s more of a possibility than normal.

“They’re going to learn a lot about playing low-post defense at a very young age.”