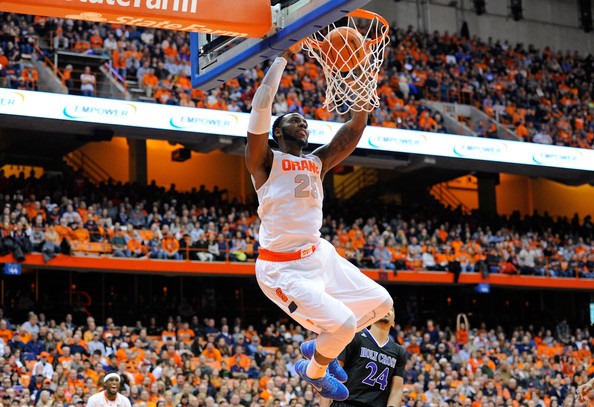 Michigan and Syracuse will face off in a Final Four rematch tonight, but both programs have rebuilt almost their entire rosters since they met in Atlanta just over a year and a half ago.

Michigan and Syracuse will face off in a Final Four rematch tonight, but both programs have rebuilt almost their entire rosters since they met in Atlanta just over a year and a half ago.

Once complementary role players, LeVert, Christmas, Albrecht and Cooney are now focal points of their respective teams while names like Burke, Fair, Hardaway, Carter-Williams, McGary and Triche are distant memories.

Despite revamped rosters, that Final Four matchup still holds some significance because it was the first time that John Beilein cracked Jim Boeheim’s vaunted 2-3 zone. Entering that game with an 0-9 record against Boeheim, Beilein and Michigan unfurled a nearly flawless offensive performance in the first half. Michigan sliced and diced Syracuse to the tune of 1.33 points per possession over the first 20 minutes and then clung desperately to its lead for the final 20 minutes as the offense stagnated.

The names and faces have changed over the last 18 months, but Beilein and Boeheim are set to face off once again.

The Orange play fast on offense, with an average possession length of just 14.7 seconds, and slow on defense, averaging 20.8 seconds per defensive possession. Syracuse’s offense is the sixth fastest in Division I while its defense its 348th fastest of 351 teams. It’s rare for a team to play with such drastically different tempos on opposite ends of the floor, but it shows just how influential Syracuse’s zone defense can be. The Orange can slow down any offense to a crawl and then waste no time turning misses or turnovers into quick offense.

Size is the next thing that jumps off the page. Syracuse is ranked 10th nationally in average height and will go 6-7, 6-9, 6-10 across the frontcourt to start the game with with 6-7, 6-7, and 6-8 options off the bench. Boeheim’s 2-3 zone defenses have always been defined by length and this roster is no exception.

Syracuse has the fifth best defense in the country through six games and and it’s still very difficult to shoot over the zone — opponents are shooting 38.5% on twos, 26.6% on threes for a 39 eFG% — or avoid turning it over when the trap comes — Syracuse is forcing a 25% turnover rate. The Orange are also ranked in the top 10 nationally in both block percentage and steal percentage. Syracuse just cracks the top 50 in both defensive rebounding rate (47th), allowing opponents to grab just 26.5% of their misses, and defensive free throw rate (48th).

Offensively, Syracuse struggles to score away from the basket. The Orange’s 46.7 eFG% is only 215th best nationally and they shoot just 19.8% from three-point range. The only Division I team that has shot the ball worse from three-point range this season is Houston Baptist. Syracuse shoots an above-average 52.4% inside the arc, but the following shot charts shows most of that efficiency comes right around the rim.

While Syracuse doesn’t do a great job of making shots, it does a great job of crashing the glass and scooping up its misses. The Orange rebound 38.8% of their misses on the season and three rotation players are ranked among Ken Pomeroy’s top-300 offensive rebounders. Syracuse doesn’t get to the line often, attempting 35.3 free throws per 100 field goal attempts, and shoots just 66.9% on its freebies. Overall, the Orange score 67% of their points on 2-point field goals (2nd nationally), 12.8% on 3-point attempts (348th) and 20.2% on free throws (209th).

Rakeem Christmas leads Syracuse in scoring and rebounding with averages of 17.5 points and nine rebounds per game. We keep saying that there aren’t many Big Ten big men that can expose Michigan’s youth at the five position, but Christmas is a player that can do just that. The 6-foot-9, 226 pound senior never used more than 14.3% of Syracuse’s offensive possessions in his first three seasons, but he’s increased his usage rate to 27.2% and has been dominant so far this season. He finishes around the rim (57% on twos), draws seven fouls per 40 minutes, crashes both backboards and is ranked fifth nationally in Ken Pomeroy’s (way-too-early) KenPom Player of the Year Standings.

Christmas is joined down low by 6-foot-10, 220 pound freshman big man Chris McCullough. McCullough is averaging 15.3 points and 8.5 rebounds per game and he’s an elite level shot blocker and offensive rebounder that shoots an efficient 58% on two-point attempts. Chad Ford thinks McCullough is a lottery pick after his strong early season play, but Jim Boeheim clearly does not:

“I’ve talked to 10 pro scouts,” Boeheim ranted to reporters last week. “Not one of them thought that Chris McCullough was a first-round pick. So who he’s talking to? I have no idea. When you print that stuff, people read it. Parents read that.”

Christmas and McCullough are the best big man duo that Michigan has faced this season and Mark Donnal, Ricky Doyle and Max Bielfeldt are in for a real challenge.

Freshman point guard Kaleb Joseph has started from day one and has had no problem distributing the ball. He’s averaging 5.8 assists per game and shooting 50% on twos. However, the 6-foot-3, 165 pound freshman is averaging 3.5 turnovers per game and hasn’t made a three-point shot in four attempts. It’s always tough to ask a freshman point guard to lead a team, especially without proven wing scorers and talent to surround him.

6-foot-4, 195 pound junior wing Trevor Cooney is known for his three-point shot. 71% of his career field goal attempts have been threes, but his career 33.6% three-point shooting percentage over the last three years is fairly average. Cooney is averaging 10.2 points per game this season and is 9-of-33 (27.3%) from long distance.

Michael Gbinije was a former top-30 recruit that transferred from Duke to Syracuse after one non-descript season in Durham. Gbinije is now a redshirt junior averaging six points and three rebounds per game off the bench. Like many of his teammates, Gbinije has been effective inside the arc (53%), but is just 2-of-16 from three-point range.

Backup forward B.J. Johnson is skinny at 6-foot-7, 185 pounds, but he’s been an effective rebounder at both ends. Johnson is averaging 7.8 points and 7.6 rebounds per game, but is shooting just 39% on twos and 25% on threes for the year. 6-foot-8 sophomore Tyler Roberson has been sidelined for the last two games with a ‘strained muscle’. Reserve guard Ron Patterson was originally headed to Indiana, but the 6-foot-4 guard has made just 3-of-17 shots from the field this season.

When Boeheim has been asked about his prior domination of the head-to-head matchups, he summed things up succinctly.

The assessment holds true. Beilein’s early teams at West Virginia and Richmond never had the firepower to compete with some great Syracuse squads of the past. When Beilein finally had a roster full of pros, he finally knocked off Syracuse. This year, the two teams appear to be pretty equal. Both have talented pieces, but are also working through some young spots and weaknesses.

How do you beat the zone? You get to the middle. At the Final Four two years ago, Michigan used Mitch McGary to pick apart Syracuse’s zone apart from the high-post.

“We knew (the middle) was an area that we might be able to exploit if we could pass out of there,” Beilein said after the last win. “We did so many passing drills this year with Mitch pivoting.  We say, catch, pivot, peek, make a pass.”

Watching the film from last year, it’s tough to notice anything other than how locked in Mitch McGary was. He rattled off six assists and put on a clinic of how to attack the zone. The key in almost every clip is to catch the ball in the high-post and have the patience to draw the defense and then find the weak spot. Watch McGary catch, draw the defense, pivot and find the pass.

There aren’t many better examples of how to pick apart the 2-3 zone, but Michigan doesn’t have a Mitch McGary to plop in the middle this year. Throwing the ball to Ricky Doyle or Mark Donnal in the high post and asking them to pivot and pass against Syracuse’s length is going to be very tough.

Caris LeVert and Kameron Chatman are arguably Michigan’s two best passers and seem like natural fits in that pivot point. While neither player provides the same sort of big target as McGary, LeVert has the ability to get to the middle off the bounce, something Tim Hardaway Jr. does in the previous clip. Kameron Chatman has natural instincts and passing ability, but he’s been inconsistent offensively early in his career.

For Michigan to knock off Syracuse, it will have to find at least one person that’s comfortable in that playmaking slot.

This one has the makings of a great game. Both teams have strengths and weaknesses that appear to play right into the hands of the other team and have coaches that know each other inside and out. Ken Pomeroy projects a 62-59 Michigan win in a 61 possession slugfest, giving the Wolverines a 64% chance of moving to 6-1.