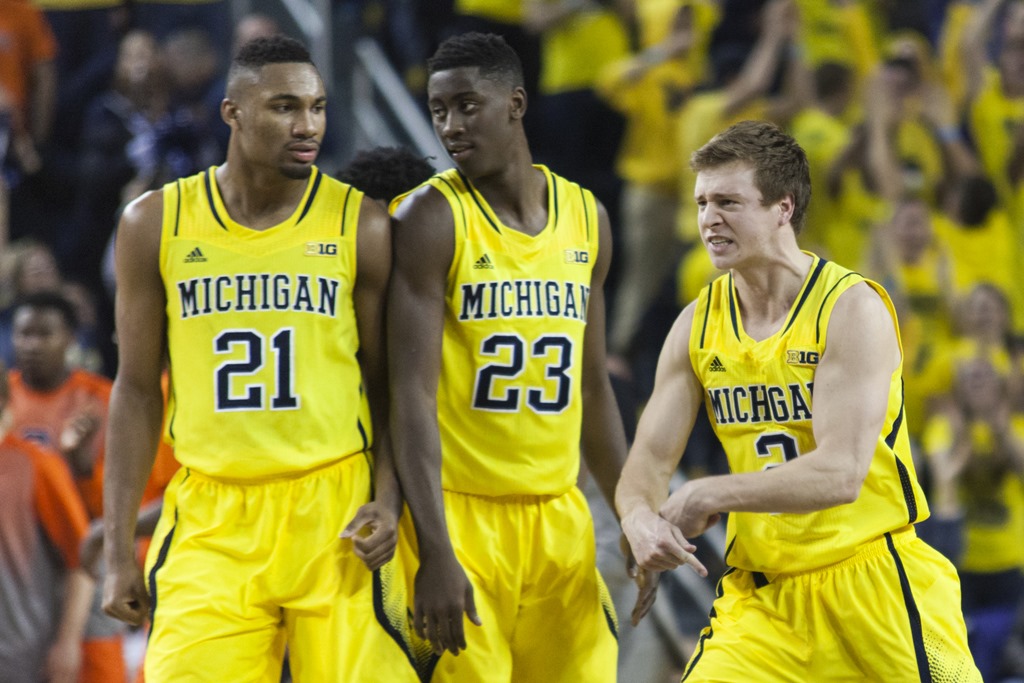 Michigan escaped on Tuesday night because Syracuse’s freshmen made just a couple more mistakes than its own, but the Wolverines won’t complain about the how or the why as they will celebrate an important early season win against a Syracuse team that, much like itself, will be much better in three months.

Michigan was already supposed to have learned this lesson.

Figuring out how to close out a college basketball game down the stretch is no easy task. But the Wolverines learned how hard it can be when they lost to Villanova at the Barclays Center last week and couldn’t afford a home loss to a rebuilding Syracuse team in a similar fashion.

The script was all too familiar. Michigan trailed at halftime after back-and-forth opening period and then stormed back into the game in the second half to take a sizable lead.

Spike Albrecht starred for Michigan as he picked apart Syracuse’s 2-3 zone defense in the final 20 minutes. He hit threes, weaved into the lane and dropped behind-the-back passes for dunks. The 6-foot junior finished with 11 points, nine assists, zero turnovers and two steals in 27 minutes and was easily the game’s MVP.

But Albrecht went to the bench shortly after Michigan extended its lead to 10 points with 7:08 to play. And just like against Villanova, where the Wolverines led by eight points with six minutes to play, things started to fall apart.

Syracuse outscored Michigan 17-10 over the game’s final seven minutes and had a two chances to win in the final minute. Even after Spike Albrecht hit a seemingly decisive three-pointer with 31 seconds to play, Michigan left the door open by missing late free throws.

This time it wasn’t Mark Donnal missing the front-end of a one-and-one in the game’s final minute, it was Derrick Walton… and then Caris LeVert.

Both players missed the front-end of a one-and-one free throw opportunity with Michigan leading by one, only to see Syracuse promptly give the ball right back. First Chris McCullough threw an outlet pass to the Michigan bench, then Kaleb Joseph dribbled the ball off the foot.

Michigan escaped on Tuesday night because Syracuse’s freshmen made just a couple more mistakes than its own, but the Wolverines won’t complain about the how or the why as they will celebrate an important early season win against a Syracuse team that, much like itself, will be much better in three months.

There’s no real secret to beating Syracuse’s 2-3 zone. It’s not some tactical mystery that every coach can’t figure out. You have to get in the middle of the zone, draw the defense and kick the ball out to shooters. Coming up with the plan isn’t the hard part, executing it against a group of long and athletic defenders specifically recruited to play the zone is. Making contested shots with arms flooding from every which direction is the hard part.

“We thought we had a good plan against Syracuse, until you see that zone and how quick it is,” John Beilein said after the win. “You’ll have these little windows to try and get open shots or open opportunities, and they close so quickly. It took us a while to get used to it.”

A lot of the pre-game discussion surrounding this game focused on how Michigan couldn’t settle for the three. Instead, the Wolverines seemed dead set on proving that if they shot enough threes then eventually they would start falling. After making just 3-of-17 first half triples, Michigan kept firing in the second half. Eventually the threes started falling and Michigan made 8-of-16 triples in the second half, enough to fuel an offensive explosion. Because of that hot three-point shooting, Michigan managed to score 1.27 points per possession in the second half despite shooting just 31% on twos.

Michigan’s offense managed to make up for an overall very average shooting performance — 44% on twos, 33% on threes, 47 eFG% for the game – by crashing the offensive glass and valuing the basketball. The Wolverines rebounded 39.5% of their misses and outscored Syracuse 17-13 in second chance points. Winning the turnover battle was critical to both Michigan’s offense and defense. The Wolverines managed to navigate Syracuse’s trap and only turned the ball over on 11.3% of their possessions while the Orange gave the ball away on 31% of theirs.

Michigan outscored Syracuse 20-7 in points off of turnovers and the giveaways saved the Wolverine defense, which struggled in the other four factors.  I actually thought Michigan had some great defensive possessions, especially in the first half, but the numbers aren’t pretty. Syracuse shot 58% on two and 38% on threes for a 56.3 eFG%, well above its season averages entering Tuesday’s game. The Orange also rebounded 42% of their misses and scored 13 second chance points.

Michigan had no answer for Rakeem Christmas (15 points, 7-9 fg) and Chris McCullough (10 points, 5-8 fg, 12 rebounds) in one-on-one situations, but did a great job of trapping and scraping down when they caught the ball in the post. Christmas and McCullough combined to turn the ball over nine times, but the trapping also allowed Trevor Cooney to heat up in the second half and knock down four triples.

The Wolverines survived, but clearly have work to do. Next up are home games against NJIT and Eastern Michigan, followed by arguably the most difficult game on Michigan’s schedule: a trip to Tucson, Arizona.