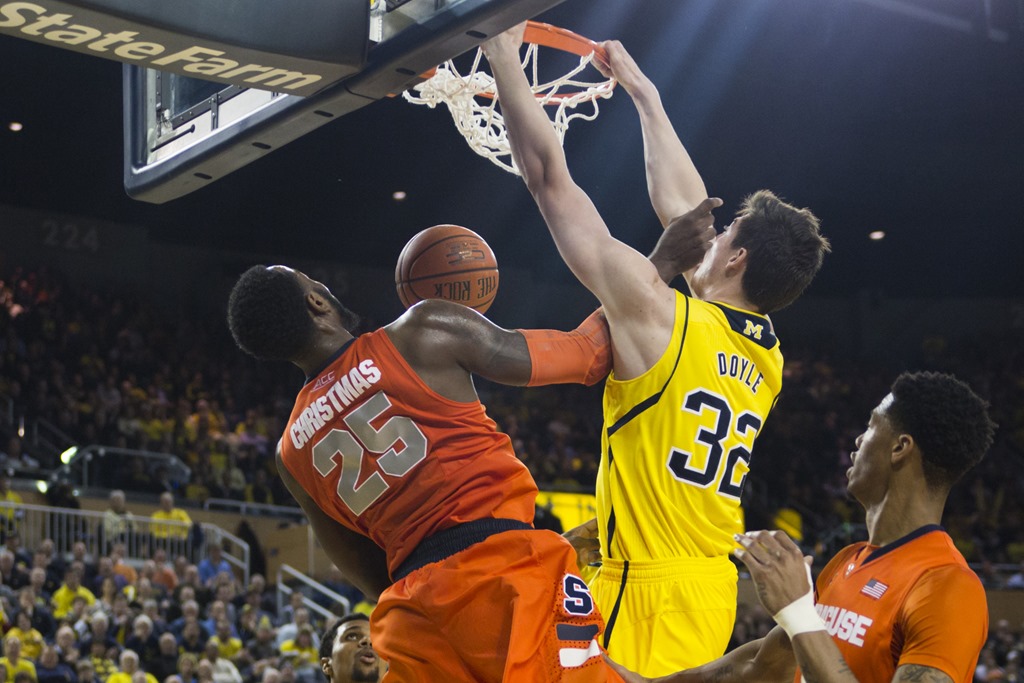 Ricky Doyle has been Michigan’s best big man over the last four games.

He had been battling an ankle injury and “another slight problem,” according to coach John Beilein, and he looked too slow and clumsy to be a big-time center when the competition shifted from Hillsdale and Bucknell to Villanova and Syracuse.

But something changed when the Wolverines traveled to Brooklyn for the Legends Classic. Suddenly, the same freshman who had taken a backseat to Mark Donnal and Max Bielfeldt was looking like by far the team’s best option at the five.

It wasn’t that Doyle took over the game against Oregon as much as it was his ability to make plays at all the right moments. He commanded the end of the first half with five points and a block in three minutes, then sealed the win with an offensive rebound, pump-fake and putback.

The Wolverines have played three more games since that night, and Doyle has continued to dominate the team’s production at center. Even though he hasn’t started, the freshman has played more than twice as many minutes than Donnal over that span — and he has earned every one.

He demonstrated as much Tuesday night, when he scored 12 points and grabbed five offensive rebounds against the Orange. Best of all, he helped the Wolverines flow offensively, leading his team with a +12 plus/minus rating.

“Today, obviously, he competed,” Beilein said. “For us to get 17 [offensive] rebounds against Syracuse, people would never believe that.”

The freshman’s success may seem surprising given his slow start, but it’s not so much to the coaches. The center had two double-double performances this summer in Italy, impressing Beilein’s staff.

“We saw, ‘Oh my goodness, this kid can play above the rim and do some really good things, and he competes,’ ” Beilein said.

Doyle is Michigan’s most physical big man on both ends of the court. Though he doesn’t have a mid-range jumper like Donnal’s, he pounds the offensive glass. And he has soft hands that allow him to corral and score on passes through traffic.

He also appears to share Jordan Morgan’s finishing gene. Michigan doesn’t need its post players to do much more than catch and finish around the basket and Doyle is doing just that. He’s 19-of-27 from the floor, 70%, and all of his production has come just a couple feet from the basket.

He demonstrated that against Syracuse, such as when he received a no-look bounce pass from Spike Albrecht and stuffed a one-handed jam with eight minutes to play. And he had also been the recipient of a behind-the-back feed from Albrecht for a dunk earlier in the second half. Doyle’s control meant he didn’t have to put the ball on the court either time.

“I was in the gutter waiting,” Doyle said. “I saw Spike go behind the back, [and] I just had one thought in my head: Rule No. 1, which down here, it means dunk when you can dunk.

“When he was driving, he kind of looked at me. His eyes were wide open. I was just ready for it.”

As assistant Bacari Alexander said in the preseason, Doyle’s potential is like “a room without a roof.” There are still plenty of places for him to improve. He — along with Donnal and Bielfeldt — was no match for Syracuse’s Rakeem Christmas inside, for instance, and Doyle is working with Alexander to keep refining on his low-post offense.

And the Wolverines would certainly like to see Doyle cut down on personal fouls — he had four against Villanova, and three against both Nicholls State and the Orange.

Doyle has been whistled for 5.4 fouls per 40 minutes and that’s a real concern for a Wolverine team that lacks proven frontcourt depth. Put simply, when the freshman is relegated to the bench, the drop in Michigan’s production can be stark.

“Ricky Doyle just turned 18 in May,” Beilein said. “That’s why we see so much promise in him.”