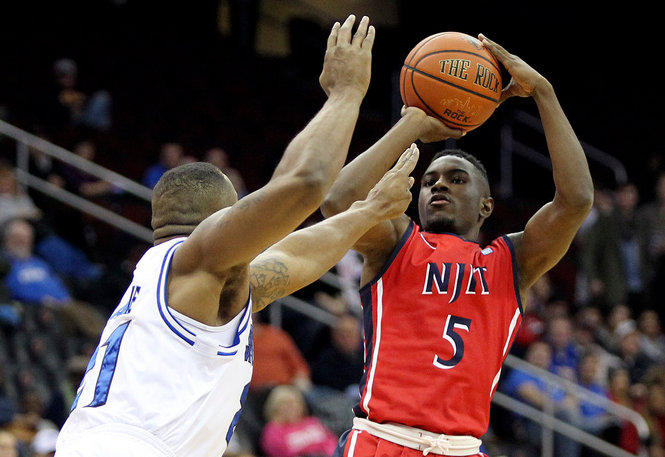 A preview of Michigan’s Saturday matchup with NJIT.

If you’re familiar with NJIT, it’s probably for reasons that the Highlanders would like to forget. New Jersey Institute of Technology moved to NCAA Division I in 2006 and quickly gained notoriety for its 51 game losing streak. The Highlanders ended the 2007 season on a four-game losing streak, lost every game in the 2007-08 season and didn’t record another win until January 21st, 2009.

Current head coach Jim Engles managed to end the 51 game losing streak during his first season (NJIT went 1-30 that year) and two years ago he even led NJIT to the five-team Great West Championship.

The Great West has since dissolved (perhaps because the five team conference had teams in Utah, Texas, Chicago and New Jersey), which leaves NJIT as the only independent team in Division I basketball this year. The Highlanders enter Saturday’s game with a 2-5 record with wins over Maine and at Duquesne (NJIT’s best KenPom win in Division I).

NJIT likes to play fast, averaging just shy of 70 possessions per game, but that speed has come with a price. The Highlanders give the ball away once every four trips up the floor. The turnover issues turn what would otherwise be a fairly average offense into a clearly below-average offense.

NJIT’s offense is perimeter-oriented, with 43% of its field goal attempts originating outside the arc, but the Highlanders are fairly average shooting the ball with a 48% 2pt/33% 3pt/49 eFG% shooting split. Surprising for a team so reliant on the three-point shot, NJIT’s strength is getting to the free throw line. The Highlanders attempts 43 free throws per 100 field goal attempts (83rd nationally).

NJIT is slightly better on the defensive end of the floor. The Highlander defense is ranked 265th by KenPom compared to the offense which checks in at 290th. The Achilles’ heel of NJIT’s defense coincides with the strength of its offense. NJIT does a good job of getting to the free throw line, but actually allows its opponents to get there even more often. Highlander foes are attempting 47 free throws per 100 field goal attempts (286th nationally). The Highlanders do a great job of taking away easy twos (44%) — perhaps due to all the fouling — but have let up 37% from three-point range.

Damon Lynn leads the Highlanders in scoring and assists with averages of 18.6 points and 3.6 assists per game. Lynn shoots the ball on over a third of NJIT’s offensive possessions and he’s primarily a three-point threat. The 5-foot-11 guard shoots 33% on twos and 37% on threes and 69% of his field goal attempts originate beyond the arc.

6-foot-4 guard Ky Howard is NJIT’s leading rebounder, with the majority of his boards coming on the defensive end of the floor. Howard’s primary offensive skill is getting to the free throw line. He draws over five fouls per 40 minutes and attempts 84 free throws per 100 field goal attempts. Howard is also a good finisher (64% on twos), but is just 3-of-9 from long range.

Wing forward Tim Coleman blocked a three-pointer to help secure NJIT’s win at Duquesne. He appears to be a below-average offensive player and has turned the ball over on 29% of his offensive possessions.

Daquan Holiday is the biggest player in NJIT’s rotation at 6-foot-8. He finishes 63% of his field goal attempts and is a plus offensive rebounder. He had a career high 12 point performance at Marquette in late November. He splits frontcourt time with Odera Nweke, who appears to play bigger than his listed 6-foot-5. Like Holiday, Neweke is an above-average shot blocker and offensive rebounder, but he’s not as efficient offensively where he finishes just 46% inside the arc.

After playing Oregon, Villanova and Syracuse in the last two weeks, a tune-up guarantee game should be a welcome change of pace for the Wolverines. NJIT could provide an opportunity to give some Michigan’s young players some valuable time and also rest Derrick Walton, who is recovering from a toe injury. KenPom projects a 77-56 Michigan victory in a brisk 65 possession game.