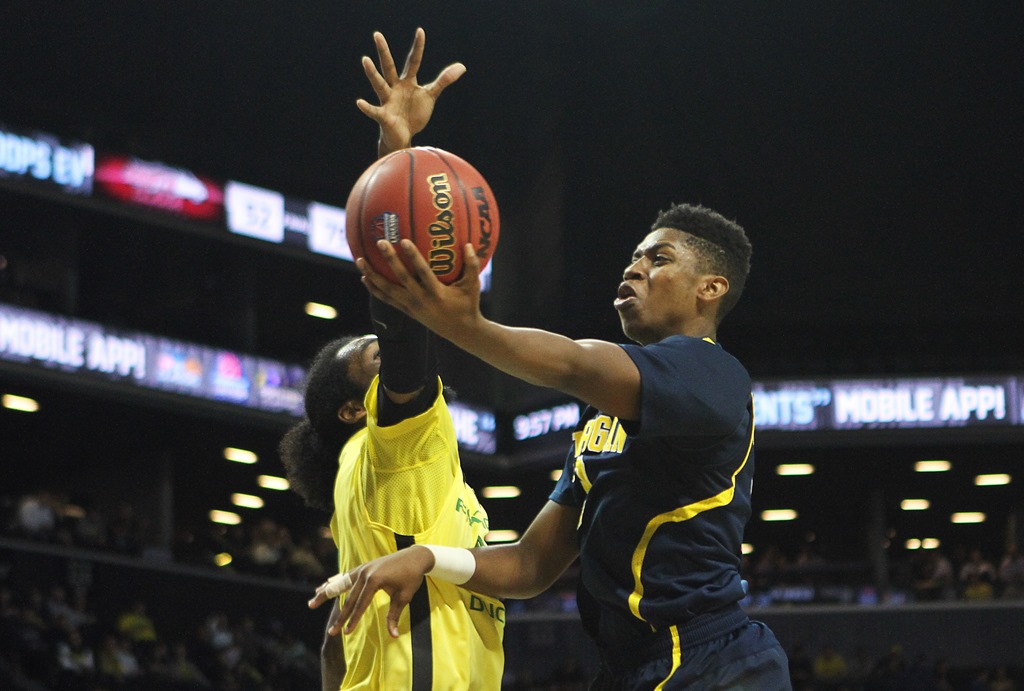 Kameron Chatman hopes to build off the momentum of a solid performance against Syracuse.

Sometimes, Zak Irvin struggles to get the 2013 Charlotte game out of his head.

It was November, and the Michigan basketball team was playing for a chance to win the Puerto Rico Tip-Off. Because of injuries to Nik Stauskas and Glenn Robinson III, Irvin had a bigger role off the bench. He shot, a lot, but he kept missing.

Irvin finished the night with just three makes on 14 attempts, and the Wolverines lost on a last-second bucket.

But despite the poor early season performance, Irvin rebounded quickly to become Michigan’s key role player off the bench.

It has been more than a year since the Charlotte game, but Irvin likes using the night as a lesson for this season’s freshmen. It’s one of the many examples the forward gave Kameron Chatman as he struggled as a starter through the first handful of games.

“I told him I was in the same spot last year,” Irvin said. “I started off last year not shooting the ball too well.

“(Chatman) is a complete player, and he’s very versatile. He can do multiple things on the court.”

Though Chatman said he has endured ups and downs throughout his career, the freshman admitted the feedback he received from Irvin and others helped keep his confidence up.

Chatman said coaches haven’t focused too much on tweaking his form, and that their primary concern was that the freshman keep shooting.

It paid off Tuesday against Syracuse, when Chatman delivered the most impressive performance of his career. He scored 10 points, often on turnaround jumpers from the soft spot of the Orange’s zone.

“I came in with confidence, and I knew my shot was going in,” Chatman said. “I wasn’t really second-guessing myself.”

Chatman explained part of his confidence came because he knew from where he’d be shooting on the court. During warmups, Chatman said he sank about 150 shots, helping him get in a groove before tipoff. It helped the freshman get on the board early in the contest with a turnaround jumper, and then he boosted the Wolverines late with a big three-pointer.

“I talked to my teammates, and they told me there was going to be a lot of ups and downs on the season,” Chatman said. “I just tried to stay focused and stay in the gym and knew that eventually my shot would start falling.

“The Syracuse game was a big confidence-booster for me.”

No changes to starting rotation

But Michigan has had solid — if not better — options off the bench in Ricky Doyle and Spike Albrecht.

Still, coach John Beilein said there are no plans to make changes to the starting five.

“We’re getting Spike and Ricky off the bench, and it’s really been big for us to have that type of spark in the middle-minute marks of a half,” Beilein said.

Doyle has quickly become the team’s go-to big man. Against Syracuse, he earned 24 minutes to Donnal’s eight and scored 12 points. He has played more than twice as many minutes as Donnal over the last four games.

Similarly, Albrecht helped break down the Orange’s defense by attacking the zone off the ball screen and making tight passes to Doyle in the paint or for a three-point shooter outside. Walton, meanwhile, scored just three points and made only one field goal.

Walton not fully healthy, expected to play vs. NJIT

Though Walton started against Syracuse, he was hampered by not having practiced against the 2-3 zone because of a sprained toe. He finished just 1-for-7 on the night in 26 minutes.

Still, Beilein insisted Walton will play against NJIT, unless he suffers a further setback before then.

“Absolutely not,” Beilein said when asked if Walton would be better served to sit out the game and rest. “We’re going to need him in this game. I believe he’ll be able to play, even if it’s limited minutes.”