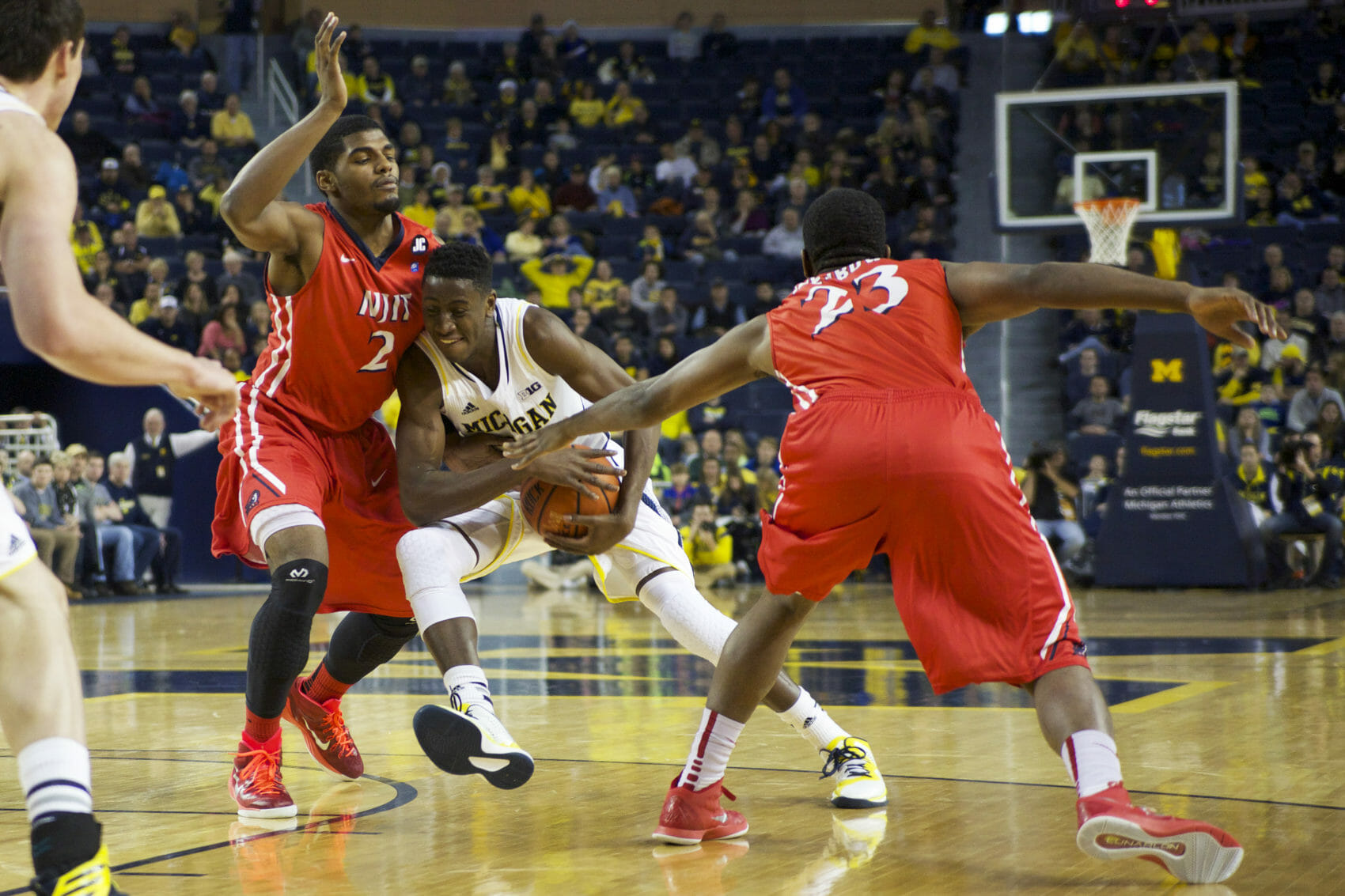 The Wolverines’ captains led a meeting Sunday to address what Albrecht deemed an unacceptable performance against NJIT.

When John Beilein walked into the Crisler Center media room Monday afternoon ahead of the Michigan basketball team’s game against Eastern Michigan on Tuesday, he had a message for his audience: “What hurts also instructs.”

“I keep thinking about that, and I’ve said that several times when people would say ‘too bad about the loss’ and things like this,” Beilein said, alluding to Saturday’s 72-70 upset against NJIT. “We didn’t certainly play our best game. … After reviewing the film, we certainly didn’t play close to the level we can play.”

“It wasn’t Michigan basketball,” Albrecht said. “I just wanted to reiterate that to the guys.”

The duo compared Saturday’s loss to similar upsets during their college careers. In 2013, Penn State eliminated a 15-point deficit to earn its first Big Ten win in more than a year against a Trey Burke-led Michigan squad. And last winter, the Wolverines fell on a last-second bucket to Charlotte in the Puerto Rico Tip-Off.

“I told them, ‘If you don’t think you’re going to face adversity in college basketball, you’re crazy,’ ” Albrecht said.

Beilein noted that four schools that won their ACC/Big Ten Challenge game — Georgia Tech, Miami, Purdue and Michigan — then lost what was supposed to be a “guarantee game” later in the week. (The Yellowjackets to USC Upstate; the Hurricanes to Green Bay; and the Boilermakers to North Florida.)

But that doesn’t mean Beilein is okay with falling to NJIT. He said results like Saturday’s happen “once every 50, one in every 100 games,” and that he remembers every monumental upset his teams have suffered — even recalling a loss in 1979 when he coached at Erie Community College.

“It’s what makes me so paranoid for every guarantee game,” he said. “… It happens. It happened to us. That’s it.”

But, as he emphasized postgame Saturday, the coach expects his team will learn from the defeat. And, as LeVert said, it will help ensure younger Wolverines don’t underestimate seemingly inferior opponents.

“We’re going to grow from this,” Beilein said. “How quickly? I don’t know.”

Wolverines preparing for another 2-3 zone

As Beilein explained, playing Eastern Michigan and its 2-3 zone has its share of benefits and pitfalls.

The biggest plus? The Wolverines already cracked a 2-3 zone this season when they bested Syracuse, 68-65, on Dec. 2 at the Crisler Center, so they’re familiar with the concept despite having just two days to prepare for the Eagles.

The biggest negative? Eastern Michigan has game film of how Michigan will try to attack its defense.

“We’ve put our whole package out there,” Beilein said. “They actually have a real scout [report], where usually you can’t really tell that. The biggest challenge of the 2-3 zone is one thing that’s certainly strong.

“They have depth. They really put together a good run here.”

“Those three guys on the perimeter can get buckets,” Beilein said, “and that’s concerning, because that’s what we just saw [against NJIT].”

Walton still not practicing full-speed, no concern with Albrecht

Derrick Walton may have started in Michigan’s last two games, but he’s still not fully healthy. The sophomore guard was held out of practice “100%” on Sunday as he recovers from a sprained toe.

“I thought that was important,” Beilein said. “He just did a little bit of light shooting and did his weight training. I thought that was key, because he wasn’t moving well defensively in the game. Hopefully, today will be better.”

Beilein said he expects to have Walton available against Eastern Michigan. In two games since spraining his toe, Walton has scored 19 points (three against Syracuse, 16 against NJIT) with five assists and four turnovers in 64 minutes.

The coach added that Albrecht, who has appeared to be nursing a right hand injury since the Nicholls State game on Nov. 29, “probably is all banged up, but he doesn’t talk about it, so I don’t talk about it. He just plays on.”