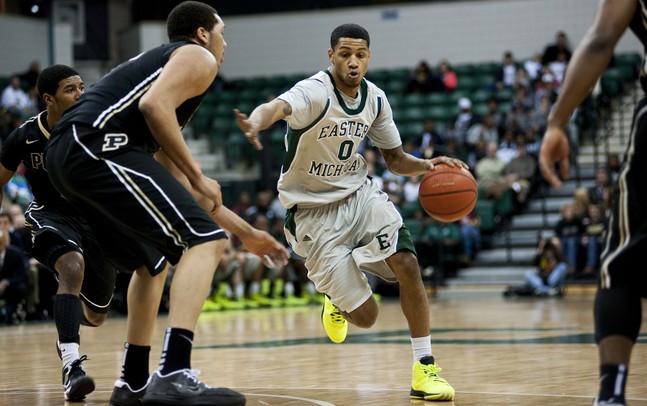 Michigan faces Eastern Michigan tonight as it looks to bounce back from Saturday’s disappointment against NJIT.

Michigan should be well-rehearsed for tonight’s matchup with Eastern Michigan after picking apart Syracuse’s 2-3 zone just seven days prior. EMU head coach Rob Murphy was an assistant at Syracuse for seven seasons before getting the head coaching job in Ypsilanti and he brought Boeheim’s famous zone with him.

The Wolverines have experience against the zone, but they also have some issues to workout regardless of their opponent. Saturday’s home loss to NJIT still stings and Michigan needs a bounce back performance before heading to Arizona on Saturday.

The Eagles enter tonight’s game with game a 7-1 record and a KenPom rank of 132. Their schedule has been one of the easiest in Division I so far, but they are heading to Ann Arbor after their most difficult game of the season, a nine point loss at Dayton.

The 2-3 zone has been fairly effective during Rob Murphy’s four years in Ypsilanti as the Eagles have managed to put together a top-100 defense in each of the past four seasons, peaking at No. 24 nationally last year. Similar to some of Boeheim’s great Syracuse defenses, Eastern Michigan ranked 4th in defensive eFG% and 11th in forced turnover percentage, but just 347th in defensive rebounding last season.

This year, the Eagles are ranked right around 100th in all three of those categories, but their early season schedule has been a bit cupcake heavy – with three games against non-Division I foes and four against teams ranked 200th or worse according to KenPom. The Eagles lost 7-foot shotblocker DaShonte Riley from last year’s roster, which helps explain some of the interior defensive regression.

Still, this is a classic ‘Cuse style 2-3 zone team that is capable of turning teams over and forcing them into very difficult shots. EMU doesn’t have Syracuse-caliber length, but the Eagles are still ranked 53rd nationally in average height. Michigan was surprisingly effective on the offensive glass against Syracuse’s 2-3 zone and I’d expect a similar approach tonight.

While this EMU defense might not match last season’s 22-15 club, the offense should be better. The Eagles didn’t manage to top 297th in adjusted offensive efficiency during Murphy’s first three season and have now shown at least the potential to be at least average on the offensive end, entering tonight’s game with the 164th best offense in Division I. EMU shoots 51% on twos and 34% on threes, with 40% of its field goal attempts coming from long distance for a 51.1 eFG%. It also does a great job of getting to the free throw line, but is just average on the offensive glass.

Ray Lee averages a team-best 16 points per game and the 6-foot-3 sophomore has been significantly more efficient this year. Lee is shooting 63% on twos and 36% on threes for a 59% eFG% this season, early signs of vast improvement from his 43%/32%/49% shooting splits last season. In a more unique injury this season, Lee was kicked in the eyeball yesterday, but is still expected to play.

Mike Talley is coming off the bench this season, but the 6-foot guard is still EMU’s best point guard. He’s averaging 10 points and four assists per game and has an impressive 76% free throw rate.

Karrington Ward is Eastern Michigan’s No. 2 scorer, averaging 13.6 points per game. Ward is a 6-foot-7 slasher that leads the Eagles in rebounding at seven per game. Ward is disruptive in the zone with his shot blocking ability, but he’s shooting just 29% from long distance this season.

Freshman guard Ethan Alvano has started every game at point guard. He’s not a great shooter (11% on threes) or scorer (4 points per game), but he touts a 4 to 1 assist to turnover ratio.

Eastern’s interior presence is a bit lacking without DaShonte Riley, but Anali Okoloji leads the way. He’s EMU’s best offensive rebounder, but the 6-foot-8 graduate transfer from George Mason is only shooting 47% inside the arc. Okoloji starts at the four while Mike Samuels anchors the middle. Samuels is 6-foot-11, 285 pounds and has been whistled for 11 fouls per 40 minutes against Division I competition. Led by Brandon Nazione, the Eagles also have plenty of size off the bench but don’t get much production from their reserve big men.

Former Detroit Country Day wing Jodan Price is a designated three-point sniper, but the 6-foot-7 transfer from DePaul is shooting just 31% on threes and is just 1-of-14 on two-point attempts.

The last time these two teams met, Michigan was playing some of its best basketball during the undefeated start of the 2012-13 season and steamrolled the Eagles, 93-54. This year’s battle should be more competitive. Not only does Michigan enter tonight’s game limping after an embarrassing defeat to NJIT, the Eagles have also improved significantly since 2012. KenPom projects a 69-59 Michigan victory, giving the Wolverines an 87% chance of moving to 7-2.