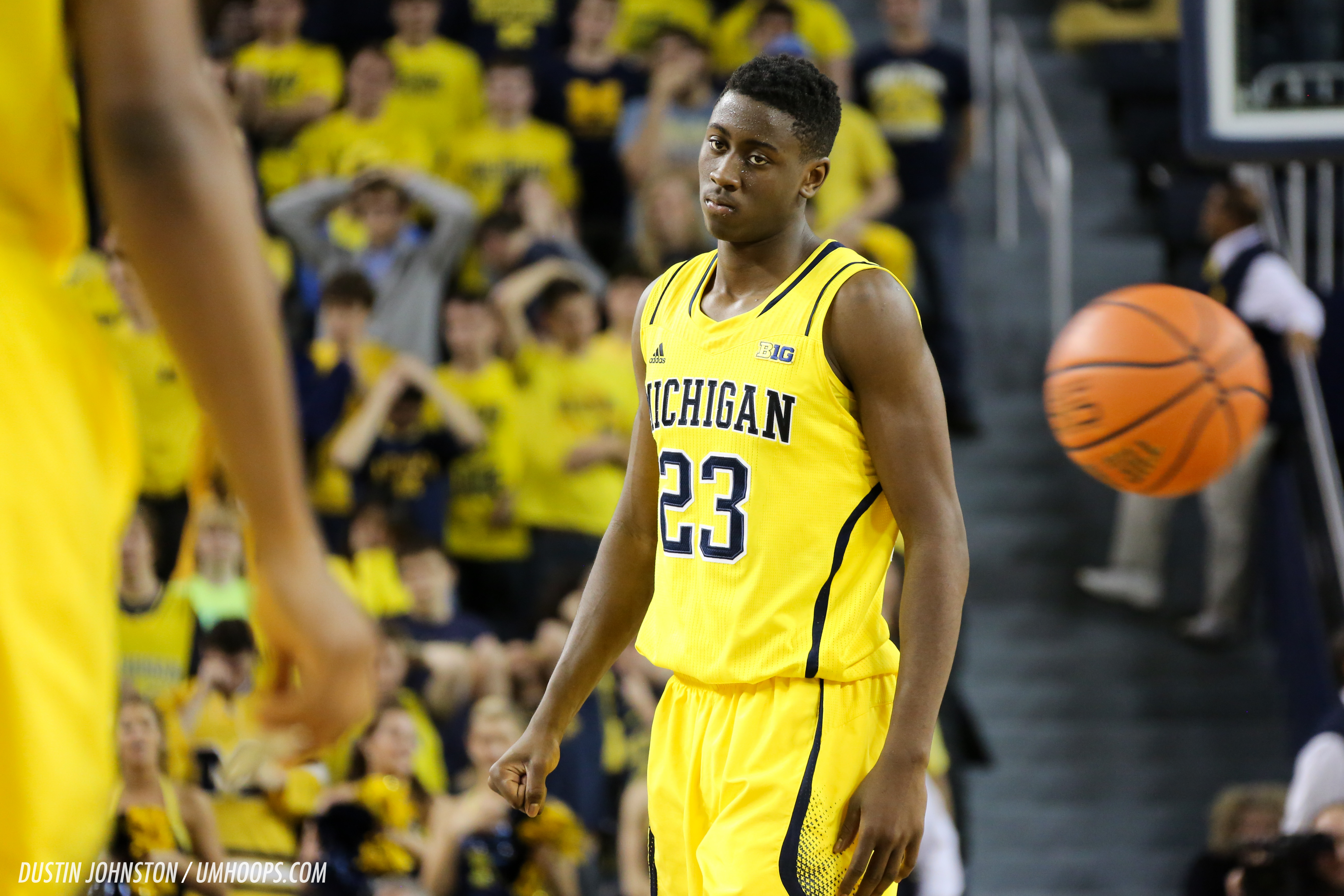 Michigan managed just 42 points as it lost at home to Eastern Michigan in its worst offensive performance since 2010.

A week ago, Michigan’s season was running smoothly. The Wolverines had accomplished about as much as anyone could have asked for in early season play. They knocked off Oregon and had just beaten Syracuse to bounce back from a close loss to Villanova. But in a matter of days the wheels have fallen off quicker than anyone could imagined.

First the Wolverines lost at home to NJIT. Now just three days later, Eastern Michigan walked out of the Crisler Center with a victory.

The upset followed a similar script to Saturday’s shocker. The Wolverines got out to a modest early lead, but were never able to extend it and allowed Eastern Michigan to hang around. Against NJIT, Michigan’s unraveling was its mediocre defense. Tonight, it was the sheer inability to generate any offense against EMU’s zone-defense.

The Wolverines bricked themselves into a close game they didn’t want and provided Eastern Michigan with more life with every miss. A Michigan offense that has looked so lethal over the past two seasons — and even for stretches this season — looked rudderless in the first half, failing to make a field goal for nearly a 14 minute stretch in the first half.

Despite playing its worst offense in years, Michigan still had chances to win the game down the stretch. The Wolverines had five tries to tie the game in the final 2:30 while trailing by a single possession, but were never able to capitalize and Eastern Michigan escaped with the win.

This was Michigan’s worst offensive performance since February 23rd, 2010 when it managed just 44 points in 63 possessions in a home loss to Illinois.

Eastern Michigan befuddled Michigan’s offense by pushing the wings of the 2-3 zone high and applying swarming pressure. At times the EMU zone almost looked like a 4-1 as the wings spent the majority of their time well above the free throw line. This worked because Michigan’s small guards couldn’t pass over the high-pressure and because the Wolverines sorely lack a reliable finisher to catch and finish on the other end.

The Wolverines tried to make adjustments, but they just didn’t work. Michigan’s primary adjustment in the second half was to drive into the middle of the zone and then look for drop off passes to the big man. That resulted in a couple of easy baskets, but a lot more errant and dropped passes and a 22% turnover rate. Eastern Michigan’s preparation and execution of its game plan was masterful and Rob Murphy deserves all the credit of the world for putting the Syracuse film to work and out-coaching Beilein.

Perhaps most jarring was Michigan’s inability to get the sort of baskets that helped turn the Syracuse game: transition and second chance points. The Wolverines rebounded a woeful 7% of their misses and recorded just two fast break points.

How bad was Michigan’s offense? Not a single Wolverine made more than four shots or scored more than 10 points.

Eastern Michigan’s offense wasn’t much better. This was Michigan’s best defensive game of the year, which only magnifies how bad the Wolverine offense was. The Eagles shot 33% on twos and 32% on threes for a 39% eFG% while giving the ball away on 28% of their offensive possessions – and they still won the game.

The talk of growing from losses and necessary learning experiences for this young team is over. Losing back-to-back games, at home, to NJIT and Eastern Michigan isn’t a learning experience – it’s a major red flag. That’s a radical step backward for a program that had only lost four home games over the past three seasons.

Michigan has a laundry list of flaws to fix and it has to do it fast.

Kameron Chatman has struggled while Aubrey Dawkins and Muhammad Ali Abdur-Rahkman just aren’t ready. Down low, Beilein’s best option has been to shuffle through Mark Donnal, Ricky Doyle and Max Bielfeldt and hope he comes up with the winning ticket. Michigan needs some sort of consistent production from someone other than its four veterans and right now it’s not there.

Perhaps the only positive of traveling across the country to face a top-five team like Arizona is the fact that the pressure will be off. Against Eastern Michigan, the Wolverines played like a team that had just lost to NJIT and was terrified it would happen again. That pressure will be off at Arizona, where Michigan will probably be a double-digit underdog, but the Wolverines will also be playing arguably their most difficult game of the season.

The losses are much worse this season (NJIT and EMU at home are about as bad as it gets), but the calendar is still on Michigan’s side. Last year on this exact day, the Wolverines held the an identical 6-3 record and were about to face Arizona. That team lost to Arizona, then lost Mitch McGary a week later only to rebound and make the Elite Eight. That sort of talk is eons away for this group, but there’s a lot of basketball left to be played this season.