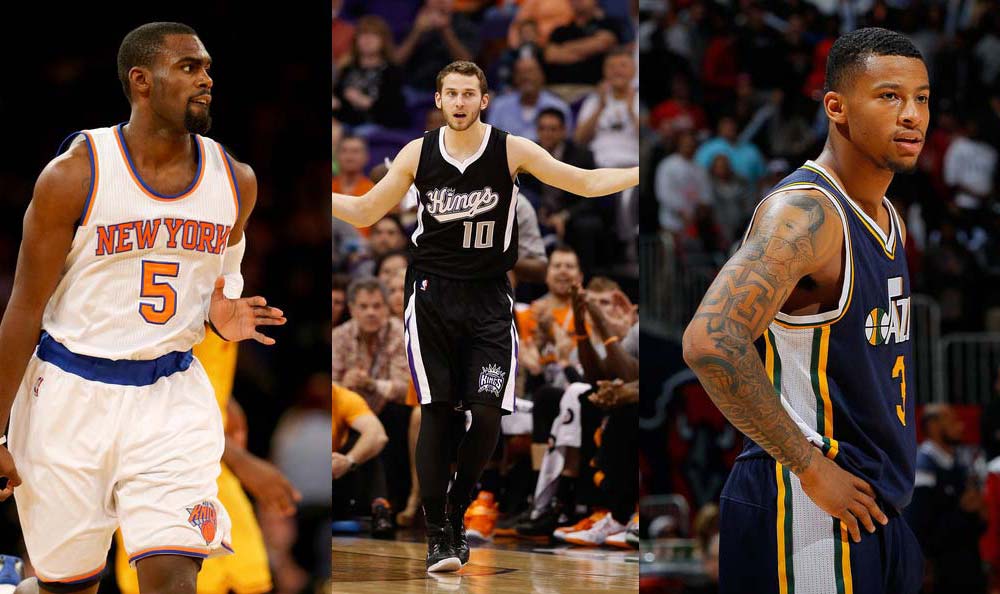 Former Michigan players have gotten off to a rocky start this season in the NBA. Here’s the latest on how Nik Stauskas, Trey Burke, Tim Hardaway Jr., Glenn Robinson III and Mitch McGary have fared this season.

As the Michigan’s current team struggles to replace some of its early entry losses, we turn our attention to former Wolverines in the NBA — several of whom have had a rocky start to the season.

Nik Stauskas had a breakout game Monday against Trey Burke and the Utah Jazz. The 2014 NBA Draft lottery pick scored a career-high 15 points on 6-of-12 shooting accompanied with eight rebounds in 30 minutes. (Highlights)

“You think you have an open look but guys are so quick and they’ve got long wingspans. They close out real quick and you don’t have a lot of time to get that jumper off,” Stauskas told The Salt Lake Tribune.

As Vantage Sports notes, the issue for Stauskas seems to be one of confidence. A sharpshooter at Michigan, he was making just 29.41% of his open looks in the NBA before Monday’s game, the worst mark for any point guard in that category.

Struggling so much with his bread-and-butter in shooting the basketball, Stauskas seems to be experiencing a crisis of confidence of sorts, often overthinking and hesitating. Here Stauskas nicely pump-fakes a defender into a wide-open shot attempt, only to hesistate and overpass, eventually leading to a Kings turnover.

Burke, meanwhile, had 13 points and five assists Monday, part of a solid second-year campaign. He’s averaging 11.3 points with a 42.8% eFG for the Utah Jazz and has scored in double-digits in all but one game this month.

Burke has had his fair share of ups and downs in the league, but the last month has been impressive. As SBNation site SLC Dunk points out, the backcourt of Burke and Alec Burks is already solid in their first year starting together and should only improve with experience.

My “eyeball test” of the Burkseses is that they show flashes of being legit NBA players, perhaps long term starters in the NBA. However, flashes aren’t enough if we are expecting them to play at the level of a playoff bound backcourt. When you look at the whole NBA you see that offensively they are “right there” in the middle (OFF RTG analysis at the top). Defense is a mystery to about 13 players on our team right now, so I’m not going to single them out. But when you look at the Jazz history you also see that while Burke and Burks aren’t stellar, they are indeed better than some groups you wouldn’t have thought.

On the East Coast, Tim Hardaway Jr. is a valuable bench player for the New York Knicks, scoring 9.3 points per game. But as the Knicks have struggled to a 4-20 record (including 10 losses in a row), tensions appear to be growing between Hardaway and Carmelo Anthony.

“Anthony used another expletive in telling Hardaway he was going to beat him up when they got into the locker room after the game.”

“Certain his second-year teammate was speaking to him, Carmelo Anthony approached Hardaway on the way down the court and used an expletive to ask Hardaway who in the world he thought he was talking to,” reported ESPN’s Chris Broussard. “Anthony … used another expletive in telling Hardaway he was going to beat him up when they got into the locker room after the game.”

Before the Knicks lost to San Antonio yesterday, Anthony and Hardaway confirmed that the argument had happened, but, as the former Michigan forward said, “We’re brothers. Brothers argue in the heat of the moment and then they make up.”

Glenn Robinson III has played limited minutes during his time with the Minnesota Timberwolves. Robinson is averaging 5.1 minutes and 1.9 points per game and has seen action eight times this season.

Finally, the Oklahoma City Thunder sent Mitch McGary — who has yet to appear in a regular-season game — to its D-League affiliate Wednesday. The former Wolverines has been on and off the active roster all season since recovering from a fractured foot suffered in October.