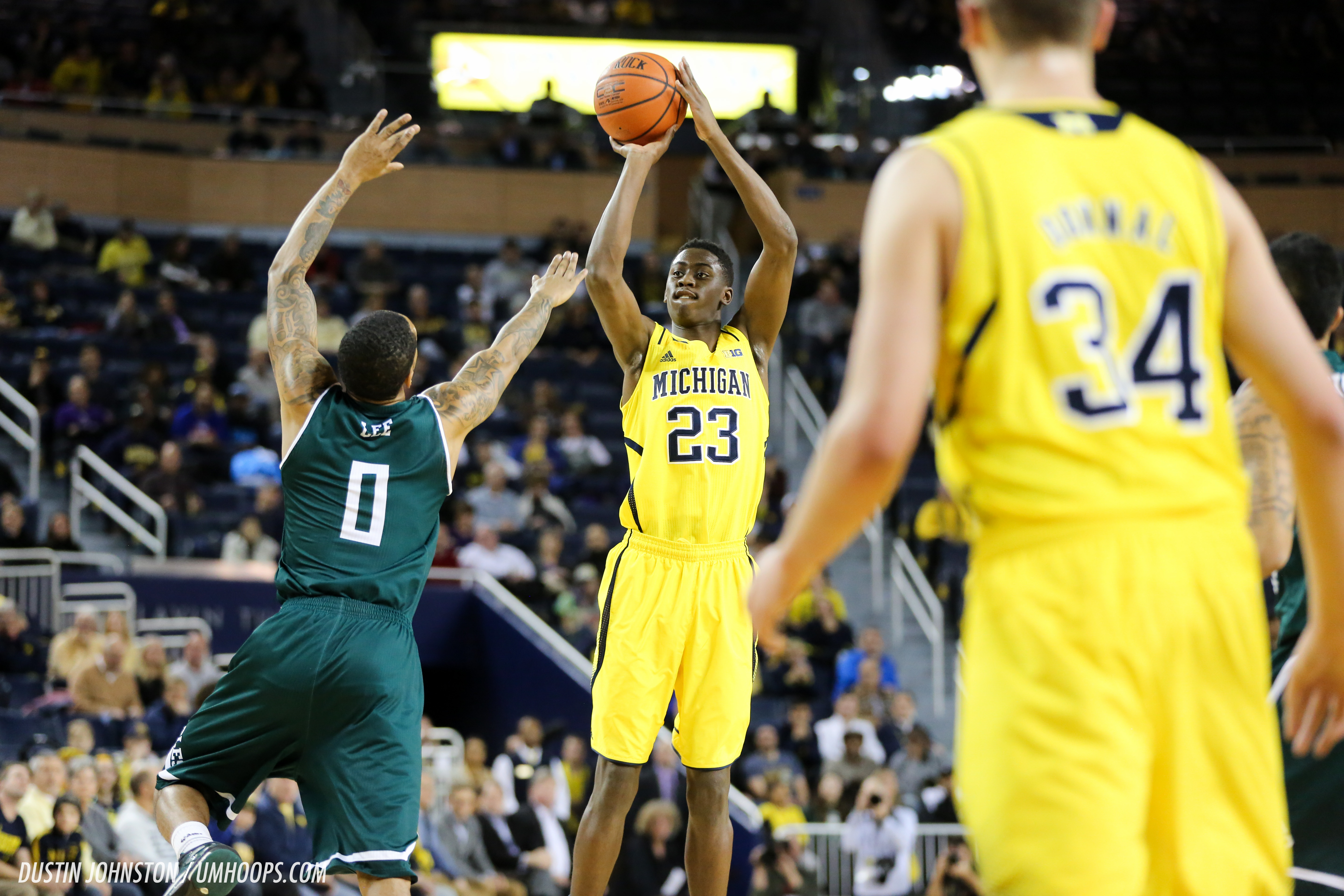 Michigan sits at 6-3 after losing back-to-back home games to mid-majors. Here’s a closer look inside the numbers at what has caused some of the Wolverines’ early struggles this season.

Michigan is just 6-3 after suffering two of its worst home losses in years – back to back against NJIT and Eastern Michigan. On a game-by-game basis, it’s easy to see what went wrong. Against NJIT it was a horrific defensive performance and against Eastern Michigan it was an inability to cope with a stifling zone.

But analyzing the Wolverines as a whole, there are some major issues to fix. The Wolverines are ranked 35th in adjusted offensive efficiency and 85th in adjusted defensive efficiency and are close to falling out of Ken Pomeroy’s top-50. For a program that had established an almost unfair level of offensive proficiency as a benchmark over the last few seasons, it’s hard not to wonder what’s wrong?

The defensive woes can be explained by youth and the fact that they are nothing new. Michigan has played poor defensive games against bad teams before, but usually it has the firepower to overcome its defensive issues. The offensive concerns are more troubling. The Wolverines have gone on scoring and field goal droughts in several of their games that have been downright painful to watch. Michigan’s worst offensive performance since 2010 — .70 points per possession against Eastern Michigan — raises at least a few more red flags that something might be wrong on that side of the ball.

From 2009 through 2014, Michigan used more ball screens in each successive season. Most impressively, the Wolverines were also able to roughly maintain or improve their efficiency in each of those seasons.

This year, Michigan is using nearly as many ball screens as last year, but its efficiency has regressed.

What caused Michigan to drop from the 94th percentile to the 57th? There are plenty of possibilities, including just a slow start.

For his part, LeVert has always been a better isolation player. He’s one of the country’s elite isolation scorers, averaging 1.32 points per ISO possession.

But is either player capable of turning into Nik Stauskas or Trey Burke? Probably not.

The other problem is that Michigan is increasingly one-dimension in the ball screen game. The Wolverines don’t have a great roll option and are finding the roll man on just 3.6% of their offensive possessions.

Michigan’s ball screen game has essentially become one dimensional. Against LeVert and Walton, defenses can sell out to defend the ball handler, but against Spike Albrecht — who passes the ball on 65% of his ball screens, and scores just .43 points per possession when he keeps the ball  — they can sellout to defend the pass.

Glenn Robinson and Jordan Morgan were two of the best finishers in college basketball.

Their absence is magnified by the fact that Michigan doesn’t have anyone as reliable or athletic to finish along the baseline. When Michigan’s guards got two feet in the paint last season, they were generally able to throw the ball up near the rim and let Robinson get it, or find Morgan to drop the ball off to after drawing help defense.

This year? The primary option has been to fire up a five foot jumper or try to get all the way to the basket.

Kameron Chatman, who leads Michigan in field goal attempts cutting to the basket, is shooting just 33% on twos. Ricky Doyle (69%) and Mark Donnal (64%) have reliable percentages, but have bobbled away their fair share of opportunities.

Michigan is shooting just 49.3% on shots categorized ‘near the basket, but not post ups’ and those shots account for roughly a third of its offense. The Wolverines grade out in the just29th percentile at 1.03 points per possession on those attempts this season compared to the 94th at 1.24 PPP last year.

The lack of baseline finishers was magnified against Eastern Michigan as the Eagles pushed the zone high and swarmed Michigan with four defenders along the perimeter. The Wolverines didn’t have a reliable threat down low and was never able to make them pay.

Too many jump shots

Michigan has always been a jump shooting team under John Beilein, but this year’s group has been especially reliant on the long-range shot. It also hasn’t shot the ball as well.

Last year, per Synergy Sports, 58.8% of Michigan’s offensive possessions ended with a jump shot, but the Wolverines had a 51.5 eFG% on jump shots – good for the 89th percentile nationally.

This year, 63.4% of Michigan’s offensive trips end with a jump shot and the Wolverines haven’t been as efficient, converting just a 49.2 eFG%. Only Montana State and Robert Morris have taken a higher ratio of jump shots and while Michigan still shoots for a respectable 71st percentile in efficiency, that doesn’t quite justify the quantity of jumpers.

John Beilein has never played a long bench, but this season has been an extreme. The Wolverines are ranked 315th nationally in bench minutes, per Ken Pomeroy.

While that’s not much different than 279th last year or 333rd in 2013, the statistic is a bit misleading because a) One of the players playing ‘starters’ minutes comes off the bench and b) It’s the early season and bench minutes generally decrease later in the season.

Among Big Ten teams, only DJ Newbill is playing a higher percentage of his team’s minutes than Caris LeVert and Zak Irvin. Spike Albrecht (18) and Derrick Walton (19) both check in in the top 20 and Walton would rank even higher had he not missed a game due to injury. Take out Walton’s DNP against Nicholls State and he’d be right nestled in the top ten between Terran Petteway and Shavon Shields with respect to minutes played.

The lack of bench trust is troubling early in the year and a product of Michigan’s young rotation, it will be tough to survive a season relying heavily on that small core group — especially with both point guards nursing injuries already.

What can be fixed?

As a team, Michigan hasn’t changed much. The Wolverines reached their recent offensive success by dialing up ball screens by the dozens and firing up more jump shots than most. This year’s team just hasn’t been quite as good at it as the more recent groups.

Michigan is going to be a team that lacks depth and shoots a lot of jump shots all season long. The Wolverines will have days where they shoot the ball much better – Irvin, LeVert, Walton and Albrecht are all capable shooters – but they’ll also have some, like Tuesday, where they don’t.

The time to develop a bench and ramp up the inexperienced frontcourt is running out. The Wolverines need production from those spots and some of the concerns will only be magnified as the season wears on and more film is available. Ricky Doyle has shown signs of progress, but there will be ups and downs from that core group all season long.

However, improvement in the ball screen game over the course of long season is to be expected. It took a year for Darius Morris and Jordan Morgan to figure out their ball screen chemistry, then they were dominant. Tim Hardaway Jr. looked like he had never heard of a ball screen for 15 games into the 2011 season, then he was ripping off passes over the top by February. When Trey Burke first arrived his talent was obvious, but it wasn’t until later in the season that he became comfortable finding Morgan down low.

Michigan has potential to be a very good ball screen team and that chemistry is possible to develop with time. At this time last season, Michigan was struggling along and Jordan Morgan was glued to the bench as Michigan’s third post option. By the end of the season, Morgan was arguably the most critical piece of the Michigan offense. This team will improve, but tracking how the Wolverines develop in these categories will be pivotal all season long.