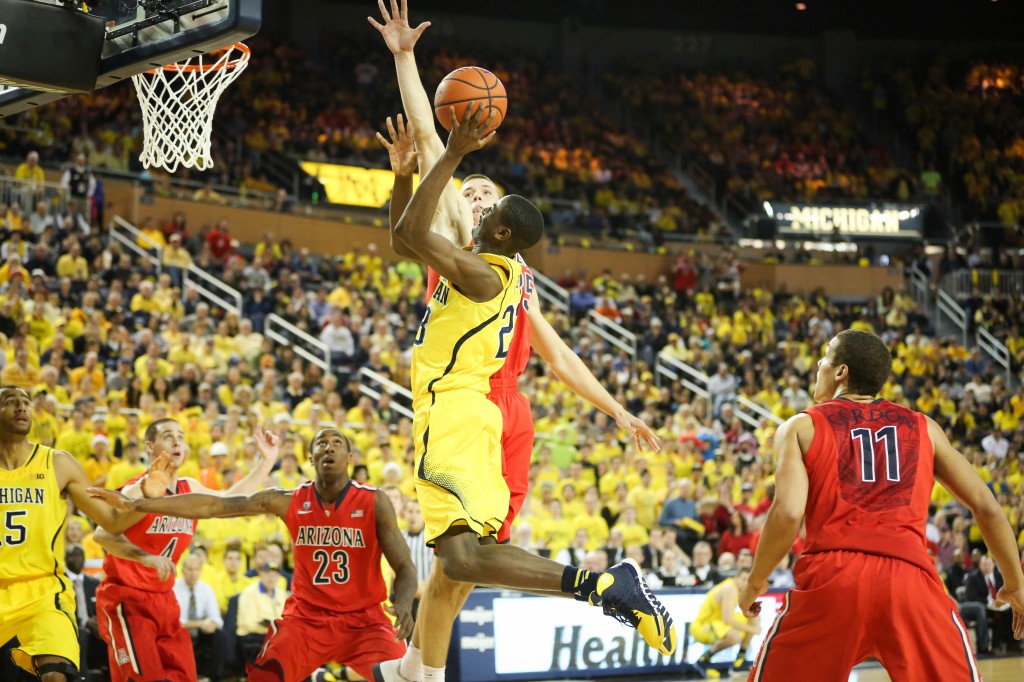 After losing to NJIT and Eastern Michigan back-to-back, Michigan is rewarded with a matchup against No. 3 Arizona. The Wildcats beat the Wolverines in the Crisler Center around the same time last year and boasted one of the most talented rosters in the country.

After losing to NJIT and Eastern Michigan back-to-back, Michigan is rewarded with a matchup against No. 3 Arizona. The Wildcats beat the Wolverines in the Crisler Center around the same time last year and boasted one of the most talented rosters in the country.

Last year’s team was in a bit of a similar rut in mid-December, suffering a few early losses and learning just days after the Arizona loss that Mitch McGary would be sidelined for the rest of the season. This year’s squad will be hoping that they can put together a similar sort of mid-season recovery.

We’ve looked at Michigan’s early struggles this season in-depth early on and a head-to-head battle with Arizona isn’t the most likely cure to a slump. The Wildcats are one of the nation’s top teams once again this season and are looking to build off of last year’s Pac 12 title and Elite Eight appearance. Michigan will be playing its first road game of the season and will have its hands full against one of the biggest and most talented teams it will face all season.

Arizona finished last season with the country’s No. 1 ranked defense. Michigan actually had the top offensive performance against the Wildcats last season, scoring 1.16 points per possession, but still came up short in Ann Arbor. The Wildcats tout one of the country’s best defenses once again this year, but the loss of defensive stars Nick Johnson and Aaron Gordon has had an appreciable effect on the overall defense.

Arizona’s pack-line defense is designed to funnel opponents into long, contested jump shots and the Wildcats’ statistical profile fits that.  Arizona opponents are shooting just 42% (40th) on two-point attempts, but a less impressive 35% (203rd) from three-point range. Arizona is dominant on the defensive glass, rebounding over 76% of its opponents’ misses, but has struggled to avoid fouls this season — surrendering a 41% free throw rate.

Offensively, Arizona’s offense is centered around utilizing its size to attack the basket and get to the free throw line. The Wildcats shoot 55% on twos and rarely attempt threes — just 29% of field goal attempts — and get to the line 52 times per 100 shot attempts. The only thing Arizona doesn’t do a great job of is crash the offensive glass, rebounding just 31% of its misses on the season. The Wildcats like the push the pace (19% of their offensive possessions come in transition), but they actually grade out better in the half court offense.

Freshman wing Stanley Johnson leads Arizona in scoring 13.8 points per game and is a projected top ten pick in next year’s NBA Draft. Johnson is touted for his ability to play both sides of the ball and he should be a difficult cover for Michigan with his explosiveness and slashing ability.

Rondae Hollis-Jefferson is a ‘power guard’ that thrives attacking the basket (64% on twos, 72% FTA/FGA) and cleaning up the glass. He’s a top 300 rebounder on both ends and an above average shot blocker at 6-foot-7, 215 pounds. He’s only 3-of-10 from three-point range on the season, but he’s 2-of-4 from long range in Arizona’s last three games.

Brandon Ashley ate Michigan up with 18 points and six rebounds in Ann Arbor last season. He’s capable of sticking the mid-range jumper or using his size to score around the basket. Ashley is a very difficult matchup for Michigan at the four position because he’s versatile enough to avoid quickness mismatches.

T.J. McConnell is the straw that stirs the drink in Tucson. McConnell stuffs the stat sheet with averages of 8 points, 6 assists, four rebounds and three steals per game. He’s Arizona’s primary ball screen threat — although he’s not a great scorer off of ball screens. His shooting splits (42% on twos, 30% on threes, 43.6 eFG%) don’t jump off the page, but his assist numbers and steal numbers are both elite.

Kaleb Tarczewski should be a very difficult matchup for Michigan’s post players. Tarczewski is a legitimate 7-footer that’s capable on the low block. He can struggle with turnover problems in the post at times (expect Michigan to double early and often), but if given time and space he’s a capable scorer.

Gabe York is the only Arizona player that shoots as many threes as twos. York is shooting 57% on twos and 32% on threes, but he was a 39% long range shooter last season.

Michigan has nothing to lose after two disappointing home losses, but Arizona doesn’t look like a great matchup for the Wolverines. KenPom projects a 68-59 Arizona win, giving Michigan just a 15% chance of escaping with an upset.