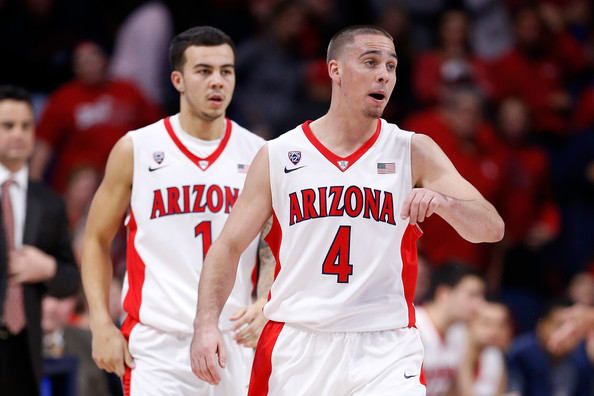 Adam Butler of PacHoops.com agreed to answer some questions about Arizona ahead of Michigan’s matchup with the Wildcats on Saturday afternoon. Butler discussed how this year’s Wildcat team differs from last year’s group and what Michigan might have to do to escape with an upset win in Tucson.

Adam Butler of PacHoops.com agreed to answer some questions about Arizona ahead of Michigan’s matchup with the Wildcats on Saturday afternoon. Butler discussed how this year’s Wildcat team differs from last year’s group and what Michigan might have to do to escape with an upset win in Tucson.

What’s the biggest difference between last year’s Arizona team that beat Michigan in Ann Arbor and this year’s team?

This team doesn’t have quite the defensive cohesiveness. Aaron Gordon and Nick Johnson were phenomenal on ball and team defenders. This year’s team is not soon to replace those skills but what they lack in group denial, they make up for in the ability to create turnovers. They’re achieving the highest steal rate of any Sean Miller team. Ever. Which of course, more often than not, translates into offense, another area where this team differs from last year.

They have more shooting threats; namely, Stanley Johnson is a perimeter improvement over Aaron Gordon and Elliot Pitts is emerging as a sniper. They’re shooting 39% and 53%, respectively from distance. One other thing to notice, particularly in this series considering Arizona took 17 offensive boards (48% OR%) in Ann Arbor, is they don’t hit the O-glass nearly as hard. These Wildcats are, in fact quite average (31.4% OR%), at it.

They’ve hit for a decent clip, but Arizona rarely shoots the three-ball. Is there any validity to the strategy of packing in your defense and hoping the Wildcats go cold?

Lots of validity and seemingly everyone has tried it. I just watched Utah Valley play an amoebic zone that forced the Wildcats to shoot nearly 40% of their shots from distance, connecting on just 30% of those threes. Of course, those Wolverines allowed Arizona to shoot 78% on all other shots and lost by 31. Nevertheless, it’s a strategy teams have implemented and it tends to at least keep the game close.

You’ll hear a lot of complaints about Arizona’s zone offense. I don’t necessarily agree that it’s a major issue besides the fact that Arizona just doesn’t always make the open shot. Their offense is deliberate and effective (13th nationally), but the starting backcourt of Gabe York and TJ McConnell – who each are getting plenty of touches (24% and 21% respective shot percentages) are both shooting well below their career 3FG percentages, that’s a gamble perhaps worth taking.

Michigan’s primary weaknesses defensively this season have been a) dribble penetration from small ball lineups and b) inability to stop low post scorers. The later seems like it will be the problem in Tucson, how equipped is Arizona to exploit Michigan inside?

Well equipped. Arizona is big and Arizona is strong and they use those traits to connect on the second highest FG% at the rim (75.7%). As previously noted, however, a lot of teams are packing the lane and forcing the ‘Cats to shoot so they don’t take a ton of shots deep in the post.

Kaleb Tarczewski’s offensive game isn’t such that it’s threatening, but if the former defensive issue becomes the case, he’ll glad dunk an easy pass from the penetrating McConnell. You’re familiar with Brandon Ashley’s talents (18/6 last year), which are quite refined on the block. Dusan Ristic is a freshman center with great touch around the rim. Toss in the positionless power guards (that’s what I call Rondae Hollis-Jefferson and Stanley Johnson) and an offense patient enough to work the ball onto the block, and this is a group well equipped to exploit a perhaps porous frontcourt defense.

One other thing to note, watch where Arizona bigs catch entry passes. In my estimation it’s too far from the basket to often make just a move and lets defenses adjust (aka, collapse, aka, Ashley and Zues have the highest TO rates on the team).

The Wildcats have already had to win three close games (over KSU, SDSU and Gonzaga) what did those teams do that allowed them to stay close?

I’ll direct your attention to this Mark Titus tweet and then continue where we’ll start with Gonzaga and San Diego State. Both of these teams did a terrific job of limiting Arizona’s ability to get easy baskets. Gonzaga yielded just 5 shots at the rim to Arizona, forcing everything to be an uncomfortable shot further away from the basket. San Diego State – quite frankly – is just a very good defensive team that simply couldn’t outscore Arizona. What Kansas State, however, highlights for me is that when you hit three pointers, you have a very good chance of beating Arizona.

The Wildcats’ pack line defense is engineered to force you into long jumpers. Right now, 53% of opponent shots are taken at this higher-risk-lower-reward distance. They don’t necessarily defend against the shot well (35% FG% there is about average), they just make you take the tougher shot more often than not. Therefore, your best options to beating Arizona are by getting to the rim (more challenging to get there) or going bombs away. Kansas State hit 7 of 12 three pointers – the highest 3FG% they’ve yielded since February 27, 2013. Just five times last year (including at UM) did Arizona give up 7 or more threes. It’s happened three times already this year. Make threes and stick around.

Who is the most important player on Arizona’s roster?

I’m struggling to come up with a good answer for this one but I’m going to settle on TJ McConnell. In polling other trusted Wildcats, I couldn’t even get a consensus answer. But I’ve settled on McConnell because for this team that defines itself as the toughest defense in the country, this is the toughest kid on the floor. Watch this play.

I could try to quantify it (113 Ortg in AZ wins, 95 in the five losses he’s been a part of), but the sample set doesn’t seem to do the math justice. Further, as teams try to pack the lane to limit what all those bigs can do, McConnell is going to have to take more and more shots. It’s being reflected in his shot percentage (highest of his career). Now if only it could be reflected in his effective field goal percentage (lowest of his career)…

Brandon Ashley played a great game the last time these two teams met. How has he developed since his injury last season?

You might not see it in the box score and in fact you haven’t. Ashley’s stats are about on par with last season. But whenever you sustain an injury, you’re afforded perspective. Brandon has developed a maturity and self-awareness that this team needs. Miller called this team out for being too quiet and identity-less. Brandon got a technical foul in the exhibition game and scored 21 in the season’s first game. For a team seemingly still finding itself, Brandon Ashley got to know himself while recovering and it’s a confidence he’ll pass along to this team as the slowly figure themselves out. He’s the most dangerous half court threat on a team that will be forced to play significant half court offense.

What are two things that must happen for Michigan to have any chance at winning at Arizona?

Like we discussed earlier, Michigan has got to hit threes. The good news? That’s a strong suit of theirs and most certainly a concern of Arizona’s. These Wildcats seem particularly susceptible to dribble penetration (Nick Johnson’s absence) and a skip pass that yields an open three (Aaron Gordon could recover so quickly on that help). Looks from distance can be there and the Wolverines have proven they can hit them.

The other thing Beilein’s boys can do is ensure Arizona doesn’t get easy baskets. This would take a collective defensive and offensive effort, keeping the Wildcats off the offensive glass and not turning the ball over. Basically not allowing an already deliberate offense to operate any more often than it needs to. That’s been the general recipe for beating an Arizona team. The games are usually close (see the Titus quote above), and I expect this one to be no different. I love the wing matchups (LeVert/Irvin vs. Hollis-Jefferson/Johnson) and McKale should be rowdy on a Saturday afternoon.