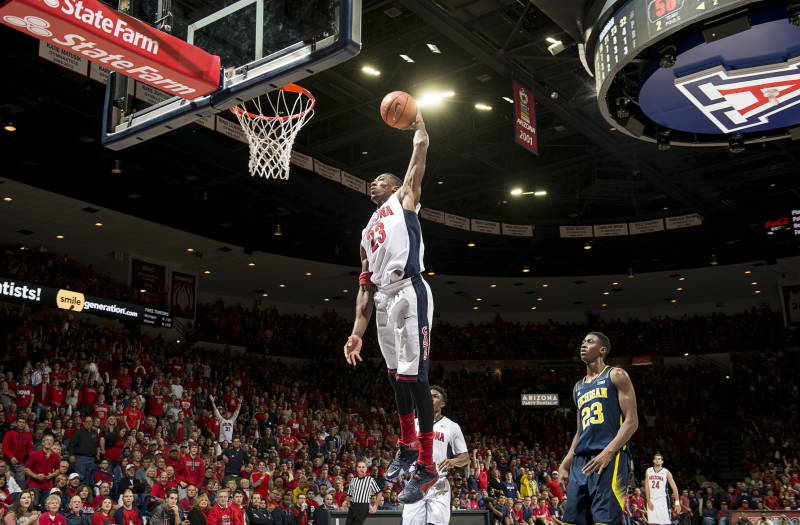 Limping and slumping, Michigan ran head first into a buzz saw at the McKale Center in Tucson on Saturday afternoon. The Wolverines were met by a bigger, stronger, more athletic and simply better opponent. While Michigan was able to hold on for parts of the first half, trailing by just 11 points at the break, eventually the Wildcats ran the Wolverines out of the gym for an 80-53 victory.

Limping and slumping, Michigan ran head first into a buzz saw at the McKale Center in Tucson on Saturday afternoon.

The Wolverines were met by a bigger, stronger, more athletic and simply better opponent. While Michigan was able to hold on for parts of the first half, trailing by just 11 points at the break, eventually the Wildcats ran the Wolverines out of the gym for an 80-53 victory.

Michigan just didn’t have any answers for Arizona’s size inside or its defensive abilities on the perimeter.

Caris LeVert was rendered ineffective by the defensive combination of Rondae Hollis-Jefferson and Stanley Johnson, finishing with just 8 points on 2-of-9 shooting with 5 turnovers in 35 minutes and his supporting cast wasn’t any better. Derrick Walton showed flashes in the first half, but only made two shots in 34 minutes. Zak Irvin finished with 14 points didn’t make a real impact on the game until it was out of hand.

Arizona’s domination of the game was due to its ability to control the rim. The Wildcats outscored Michigan 42-16 in the paint for the game and dominated the offensive glass in the second half.

This Arizona team is very good, especially on the defensive end of the floor, and is easily one of the elite teams in the country. But that doesn’t excuse Michigan’s lackluster performance.

This is a game that Michigan probably would have lost nine times out of ten, but it didn’t even look like Michigan belonged on the same floor on Saturday afternoon.

John Beilein is known for his team’s reliance on the three-point shot, but the often-forgotten barometer of whether ‘Beilein ball’ is working properly is two-point shooting percentage. The offense is reliant on the three to create enough spacing to create easy two-point opportunities. When those opportunities aren’t there — either via cuts, ball screens or transition — it becomes ugly quickly.

Michigan has only shot better than 50% on two-point attempts in one game this season, a blowout win over Nicholls State. Last year’s team shot 52.7% on twos and managed to shoot 50% or better in an impressive 11 out of 18 Big Ten games (H/T: John Gasaway)

Simply put, Michigan doesn’t have anyone that can finish around the basket. LeVert isn’t getting layups, he’s getting 8-foot jumpers. Kameron Chatman doesn’t have the strength or bounce to finish at the basket and Ricky Doyle and Mark Donnal aren’t reliable enough to finish against Arizona’s massive frontcourt.

Last year when Nik Stauskas would struggle – it feels like ages ago, but remember he went 0-2 from the floor in a blowout loss at Duke last fall – Michigan had Caris LeVert to pick up the slack. This year’s team doesn’t have that secondary option. Derrick Walton has done it in stretches, but generally needs transition play to make his impact, while Zak Irvin has the occasional hot shooting game. But Michigan needs to find another way to generate offense or the Wolverines could be in for more long nights like this.

The offense was bad, but the defense simply fell apart. Arizona started strong, but Michigan’s defense actually made enough plays to stay within striking distance in the first half. The Wolverines cleaned up the defensive glass in the first half (rebounding all of Arizona’s misses) and created just enough turnovers to generate some easy offense. In the second half? Arizona rebounded half of its misses and the Wolverines unraveled. The mistakes in the second half were rudimentary for a team at this level: botched switches, not stopping the ball in transition, missed box outs. Michigan just wasn’t good enough defensively to win and the 1.22 points per possession that Arizona scored feels generous.

Michigan has been punked on the road plenty of times before and has figured out a way to bounce back. This team isn’t as bad as it looked over the last seven days, but there’s not a lot of time to get better. In his post game, Beilein stressed how important it was for this team to get better day-by-day to start to ease the gap between teams like this and Michigan. The Wolverines have a week off to wrap up exams and try to figure things out against an inconsistent, yet talented SMU team at home.