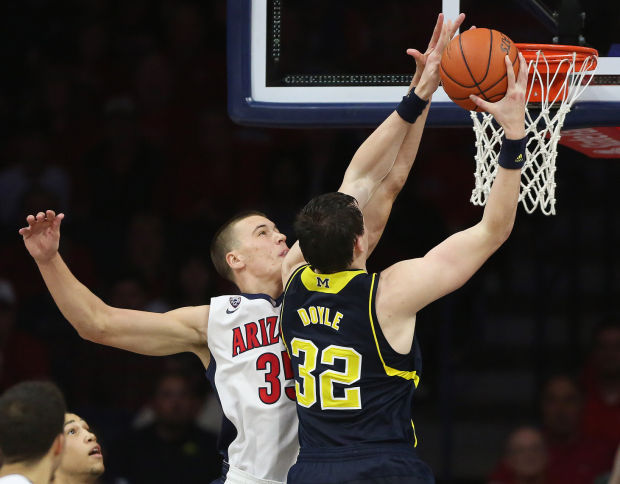 It wasn’t an ideal response from a team that needed an encouraging performance following losses to NJIT and Eastern Michigan. Rather, the Wolverines were outclassed in nearly every facet of the game. John Beilein called the loss a ‘reality check’ and a reminder of how much work his young team still has to do.

At the beginning of each half of basketball, the crowd at the McKale Center will remain standing until the opposing team records a point. On Saturday, they had a long time to wait until they could be seated.

Michigan went scoreless for more than five minutes to start the second frame as No. 3 Arizona helped itself to a 12-0 run that essentially put the game out of reach in an 80-53 win.

It wasn’t an ideal response from a team that needed an encouraging performance following losses to NJIT and Eastern Michigan. Rather, the Wolverines were outclassed in nearly every facet of the game.

“There’s a lot of things that we have to get better at,” said coach John Beilein. “Our hope is right now that, with time, we just have to keep moving. Most things with the growth of a team, it takes time, and time should take care of that [talent gap].”

Michigan shot 7-of-26 from three-point range, part of what prevented it from making a comeback when the Wildcats went more than four minutes without a bucket in the first half. And the Wolverines’ inability to connect — either from deep, by attacking the basket or otherwise — opened the door for Arizona to start the second half on a 12-0 run.

Michigan opened the second half with six misses and two turnovers while Arizona scored on seven of its first eight possessions. For all intents and purposes, the game was over.

“Offense will come,” said guard Derrick Walton. “I think it’s just a mindset. Coming into a game, of course you’re not going to make every shot, but knowing that the ball isn’t falling as much as we want it to … right now we’ll go back to the drawing board and just do as much as possible to help us keep advancing and making strides.”

“They have much bigger players, much more experienced players”

Meanwhile, Michigan was dominated in the paint, getting outscored 42-16 inside. The Wildcats’ starting frontcourt trio of Kaleb Tarczewski, Brandon Ashley and Stanley Johnson nearly beat the Wolverines by themselves, combining for 42 points and 20 rebounds. And they paced Arizona to a commanding 41% offensive rebounding percentage.

“They have much bigger players, much more experienced players,” Beilein said. “Our two freshmen centers … really were having trouble against the size of Tarczewski and the other big fellow. They’re better than us. They’re more experienced, they’re bigger, they’re stronger. It’s not style.”

And when Arizona established itself inside, forcing double-teams from the Wolverines, that left open looks for guard Gabe York and others. The Wildcats shot 58.2% (63.6 eFG%) on the game, including 35.3% from three-point range, and ruthlessly picked Michigan apart — which Beilein attributed to Arizona’s experience with getting double-teamed down low.

“This isn’t a matter of waking up,” Beilein said, explaining that the message to take from Saturday’s game was one of the team’s room for growth.

And while the McKale Center crowd spent much of the afternoon on its feet, Michigan had trouble staying on theirs. Several players slipped while making cuts, creating turnovers and generally making the Wildcats’ day easier.

Not that a couple more possessions would’ve necessarily helped, given the fact that Arizona’s lead ballooned to 36 points late.

“I think it’s a great reality check for everyone,” Beilein said. “We know that we have a lot of work to do. We have to stay together and keep working hard. We’ve been here before and our great teams have been in this exact same spot before, and this is just part of the process. We just have to keep getting better throughout the process.”

Encouraging signs were few and far between. Irvin scored 14 points on 6-of-13 shooting, but the majority of that production came when the game was out of hand. Aubrey Dawkins finally saw some extended playing time against a good opponent, but missed all three of his three-point attempts.

“There’s no quick fix here [in the game],” Beilein said. “We couldn’t have dialed up enough shots. Even if some of those fall, with the way that team plays and the way they share the ball, they’re tough for anyone to beat.”