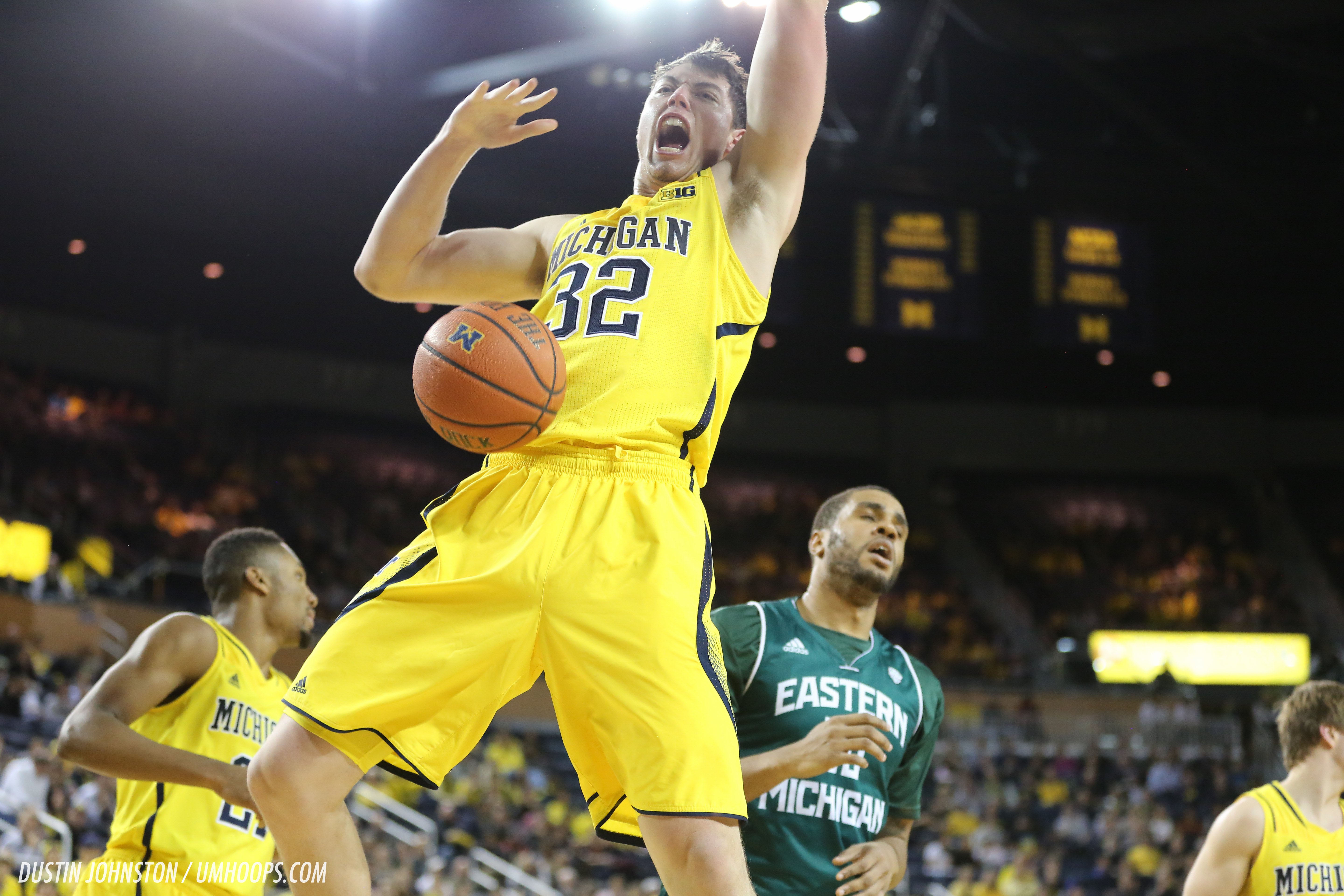 Assistant coach Bacari Alexander told the trio of Doyle, Mark Donnal and Max Bielfeldt that he hoped they’d combine for 15 points and 15 rebounds per game. But over the last three contests, the group has averaged just 10 points and five boards as Michigan has struggled inside.

Ricky Doyle’s emergence as a go-to center by the Michigan basketball team’s fourth game of the season was surprising, to say the least.

The last three games have been somewhat of a return to reality — not just for Doyle, but for all of the Wolverines’ big men. In losses to NJIT, Eastern Michigan and then No. 3 Arizona, their inability to establish or maintain an inside presence has proved to be an issue for Michigan.

In the preseason, assistant coach Bacari Alexander told the trio of Doyle, Mark Donnal and Max Bielfeldt that he hoped they’d combine for 15 points and 15 rebounds per game. At the time, Alexander recalled Doyle saying, “Coach, that seems like a low expectation.”

But over the last three contests, the group has averaged just 10 points and five boards.

The struggles against the Wildcats on Saturday were expected. After all, 7-foot center Kaleb Tarczewski, 6-foot-8 forward Brandon Ashley and 6-foot-7 forward Stanley Johnson are tough matchups for most teams in the country. Still, allowing Arizona to outscore it 42-16 in the paint and rebound half of its misses in the second half was far from  what Michigan needed if it had any chance of pulling off an upset.

“I think we didn’t get enough easy baskets today,” said junior guard Caris LeVert. “I think they got a lot of easy baskets.”

As a team, Michigan has generally struggled to score at all at the basket. The Wolverines are shooting just 46.5% on two-point attempts, which would be their worst two-point shooting percentage since 2008. Michigan is shooting just 37% on mid-range jumpers and an even mode disappointing 57% at the rim, according to ShotAnalytics

If there were one play that symbolized the Wolverines’ rough afternoon, it occurred right at the beginning of the second half — after a first period in which Michigan had scored just four points in the paint. The pick-and-roll and a nice feed from LeVert finally got Doyle a clear path to the basket, but Johnson read the play and made a strong, clean block.

“Ricky and Mark are first- and second-year guys,” LeVert said. “Mark, it’s his first year playing, actually. J-Mo and Jon [Horford] were really fluid running the offense and things like that, and Mark and Ricky are still thinking out there.”

If it were just the Arizona game, there wouldn’t be such cause for concern. But against Eastern Michigan on Dec. 9, Doyle and Bielfeldt managed nine total points, while Donnal was held scoreless. The problem there is evident from the box score: The three centers had a combined four field goal attempts, suggesting the Wolverines were having difficulty getting the ball into the paint against the Eagles’ quick 2-3 zone.

But four rebounds against a team that missed 29 shots isn’t a great number, either.

And against NJIT, the bigs went for 13 and five, still not quite the production Alexander had anticipated. Doyle isn’t yet a commanding back-to-the-basket threat, while Donnal’s midrange game hasn’t been enough of a weapon to establish himself inside, either.

But the Arizona game is troublesome on its own, too. While the Wolverines won’t face many frontcourts as talented as the Wildcats’, Beilein hoped the contest would serve as a barometer for Big Ten play.

The returns weren’t very positive, but they were another step in the development process.

“It’s motivation now,” Beilein said of what Doyle could learn from the blowout, “and it’s motivation all year for him to say, ‘This is what the big boys play like, and this is what you have to learn how to be able to do.’ ”