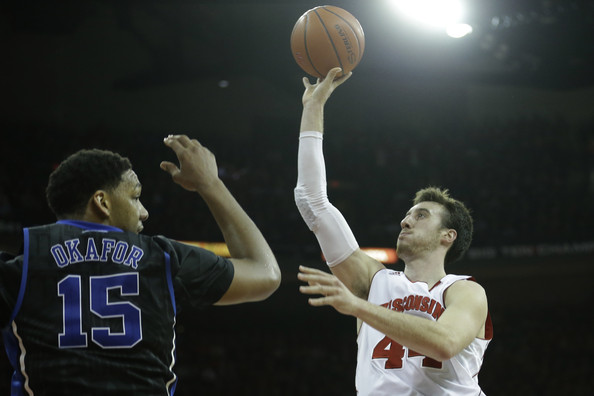 The start of Big Ten play is just two weeks away, so we’re tipping off our 2014-15 Big Ten Power Rankings a bit early. In this week’s rankings we run-down how various Big Ten teams have performed throughout the non-conference season and attempt to sort out the confusion in the conference pecking order after the first two spots while focusing on Ohio State’s zone defense, Michigan’s timeout efficiency, Purdue’s post-up game and Indiana’s halfcourt offense.

The start of Big Ten play is just two weeks away, so we’re tipping off our 2014-15 Big Ten Power Rankings a bit early. In this week’s rankings we run-down how various Big Ten teams have performed throughout the non-conference season and attempt to sort out the confusion in the conference pecking order after the first two spots while focusing on Ohio State’s zone defense, Michigan’s timeout efficiency, Purdue’s post-up game and Indiana’s halfcourt offense.

Wisconsin lost its marquee home game against Duke in the Big Ten-ACC Challenge, but the Badgers have otherwise lived up to their preseason billing. A Championship at the Battle 4 Atlantis and a pair of quality mid-major wins over Green Bay and Boise State have Wisconsin sitting in the same spot where it was in the preseason: at the top of the standings.

I scratched my head when I saw the headline this fall that Thad Matta wanted to switch to  zone defense this year. Ohio State has played almost exclusively man-to-man for the last five seasons and the Buckeyes were ranked 30th, 16th, 7th, 12th and 3rd nationally in defensive efficiency. Defense hadn’t been much of an issue in Columbus, but Matta felt like playing a zone could allow more practice focus on offense.

The early returns are favorable… but it’s time for Thad Matta to help his team work up a bit more of a sweat in the non-conference season. According to Ken Pomeroy, the Buckeyes have played the 317th most difficult schedule in Division I basketball this season. Ohio State’s only non-conference road game was a part of the Big Ten-ACC Challenge (a loss at Louisville), but Saturday’s game against UNC at the United Center should provide a better judgment of how good this Buckeye team might be.

Maryland is perhaps the biggest early surprise in the Big Ten conference. The Terrapins are 10-1 with their only loss to a very talented Virginia team and they have quality wins over Iowa State and Arizona State on a neutral floor. They’ve also manage to accomplish all of that with star player Dez Wells playing in only five games and Evan Smotrycz playing in just three.

Perhaps the biggest reason for Maryland’s early season success is 6-foot-3 freshman Melo Trimble. Trimble is leading the Terps with 15.8 points and three assists per game and is already one of the best ball screen players in the Big Ten. According to Synergy Sports, only Terran Petteway has created more points on ball screens this season

Michigan State is the best three-point shooting team in the country. When we discuss Tom Izzo’s teams we always focus on the rebounding and the defense, but this team can flat out shoot it. Three-point shooting has actually been a recent trend for the Spartans over the last two years. This year’s group of Spartans are on pace to be Izzo’s best shooting team since 2002 and his last two teams have shot more threes than any of his teams in the last decade.

As it stands, the Spartans have done everything that could be expected of them in the win-loss column, but nothing more. Michigan State lost all three of its games against top-100 opponents (Duke, Kansas and Notre Dame), but has been coasting past other competition without breaking much of a sweat.

Before the season I asked whether this would be the year we see Richard Pitino’s real defense. The answer through ten games is an unequivocal yes. The Gophers are ranked third in the country in forced turnover rate and are averaging 71.4 possessions per game, making them the fastest team in the Big Ten and the 16th fastest in the country. Imposing your style of play is one thing in the non-conference season, but it will be interesting to see if the Gophers can create a similar style game throughout the rigors of Big Ten play.

Iowa continues to be one of the most difficult teams in the conference to analyze. There were times last season where the Hawkeyes looked like one of the Big Ten’s top teams, then they lost seven of their last eight games. This year’s Hawkeye team is much better on defense than offense thanks to its size — the Hawkeyes are the sixth tallest team in Division I — but continues to be inconsistent. Iowa scalped one of the biggest road wins of the Big Ten-ACC Challenge by knocking off North Carolina, 60-55, but was drubbed at home by an Iowa State team playing without its No. 2 scorer on Friday night.

The first words that come to mind when thinking about last year’s Indiana offense are turnovers, transition, poor shooting and Yogi Ferrell.

Now Ferrell has help and the Hoosiers have the makings of one of the elite offenses in the country. Indiana’s is shooting the lights out — 56% on twos and 42% on threes — and has eliminated its turnover woes while maintaining its offensive rebounding prowess. The Hoosiers still push the tempo, but they are more than capable of scoring the ball in half court sets. In fact, Indiana is the most efficient half court offense in the Big Ten thus far, averaging 1.041 points per half court set according to Synergy Sports.

Illinois missed out on an important win over Oregon on Saturday and has dropped three of its last four. But the Illini did beat Baylor on a neutral floor – arguably the Big Ten’s best non-conference win — and should be competitive in the Big Ten. Scoring points has been a problem for John Groce’s offense as the Illini have failed to top 1 point per possession or a 46 eFG% in four games against high-major competition.

Post-up offense is a bit of a lost art in the college game, even in the Big Ten, but Purdue is the exception to that rule.

Isaac Haas and AJ Hammons are by far the Big Ten’s most dominant duo when it comes to low post production. Combined, Haas and Hammons have produced over twice as many points on the low block – either by scoring themselves or finding an open teammate – as Wisconsin’s Frank Kaminsky and Nigel Hayes. Hayes and Kaminsky are more versatile players overall, but Purdue’s post game leads the conference.

Everyone wants to ask ‘what’s wrong with Michigan’s offense?’ after the Wolverines were practically perfect on that end of the floor for the last two years. There’s a lot of fodder to discuss there, but I found this stat particularly interesting.

Over the last two seasons, Michigan had the best offense in the Big Ten coming out of timeouts. The Wolverines scored 1.02 points per possession out of timeouts last year and .941 points per possession out of the timeouts in 2012-13. This year? The Wolverines are ranked second to last in the conference in out-of-timeout offensive efficiency and out-of-timeout efficiency margin.

Perhaps its youth or bad luck, but Michigan’s inability to execute out of timeouts has been yet another red flag in the Wolverines’ troublesome start.

It’s easy to say now, but Nebraska should have always been an obvious candidate to regress toward the mean. The Huskers finished Big Ten play with an 11-7 record and made the NCAA tournament last season, but they also only managed to outscore their conference opponents by .002 points per possession. Nebraska played great defense last year, but struggled to score as its offense revolved mostly around Terran Petteway hitting deep and difficult jump shots late in possessions.

Petteway’s efficiency has regressed this season (although Shavon Shields continues to improve) and the Huskers still have a good defense and a bad offense (winning a double-overtime game with a final score in the 50s says something about something). Nebraska sits at 6-3 on the season with losses to Rhode Island, Creighton and Incarnate Word. Most troubling is the fact that the Huskers have already dropped two at home after losing only one game within the friendly confines of the Pinnacle Bank Arena last season.

Penn State’s 10-1 record is good enough to match Wisconsin and Maryland, but the Nittany Lions have beaten only one team (George Washington on Sunday) in the KenPom top 150. The Nittany Lions offense is essentially DJ Newbill and everyone else, but the 6-foot-4 senior is playing some great basketball. He’s a lethal mid-range shooter and is having his most efficient season of his career, despite playing major minutes and carrying the PSU offense.

Freshman guard Bryant McIntosh has been a welcome addition in Evanston. The 6-foot-3 guard is Northwestern’s leading assist man and No. 2 scorer, with averages of 11 points and five assists per game, and should be critical to any Wildcat improvement this season. The Northwestern offense is still well below average, but McIntosh’s addition is helping a Wildcat offense that was historically bad last season.

The Big Ten’s other newcomers look like a safe bet to battle it out at the bottom with Northwestern. Star players Myles Mack and Kadeem Jack are already having less efficient seasons than last year and we haven’t even reached conference play. On the positive side of the ledger are two decent wins over Vanderbilt and at Clemson.