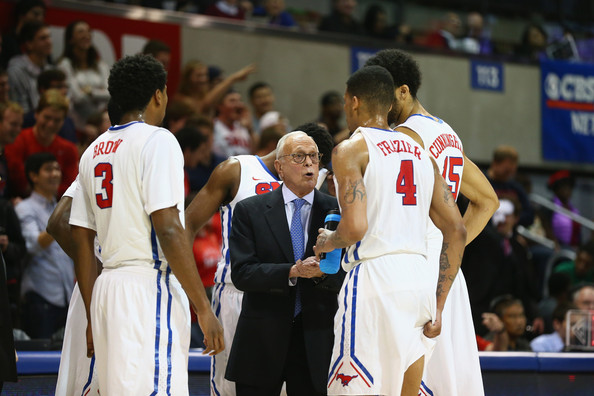 For the second consecutive year, Michigan has backed itself into a corner in mid-December. The Wolverines have a couple of nice victories, but they also have four losses to just six wins including a pair of ugly home defeats. Michigan can’t fall any further before the start of conference play and a win over SMU could provide the needed jolt of confidence to start to turn things around in Ann Arbor.

For the second consecutive season, Michigan has backed itself into a corner by mid-December. The Wolverines have a couple of decent victories over Syracuse and Oregon, but they also have four losses to just six wins including a pair of ugly home defeats to NJIT and EMU.

Michigan can’t fall any further before the start of conference play and a win over SMU could provide a much-needed jolt of confidence to start to turn things around in Ann Arbor.

The Wolverines will face an SMU team that’s also starting to regain its footing after a rough start. The Mustangs head to Ann Arbor in the midst of a five-game winning streak after starting the season just 2-3 with losses to Gonzaga, Indiana and Arkansas.

The Mustangs are playing quality basketball and should have enough talent to compete at the top of the American Conference — which ranks somewhere around the Atlantic 10 and the Missouri Valley this year — with UConn and Cincinnati. Having a hall of fame coach, Larry Brown, on one end of the bench won’t hurt either.

SMU’s offense is heavy on two-point shooting, offensive rebounds and turnovers. The Mustangs attempt 73.2% of their field goals inside the arc and convert a very efficient 53% of those attempts.  While their 35.7 3-point percentage isn’t bad – just two players (Nic Moore and Keith Frazier) account for 78% of SMU’s made threes. The rest of the Mustang roster is comprised of players who are much more comfortable scoring around the hoop. Per Synergy Sports, the Mustangs grade out in just the 28th percentile nationally in catch-and-shoot situations. SMU gives the ball away on 21.6% of its offensive possessions (264th nationally) and gave the ball away at least once every five times down the court in its losses.

Defensively, the Mustangs are ranked 49th nationally in adjusted defensive efficiency. They are fairly average in three of the four factors — ranked 88th through 125th in eFG% defense, defensive rebounding and free throw rate — but only force turnovers on 19% of their opponents possessions (233rd). The SMU defense is much better in transition (95th percentile, per Synergy) than in the halfcourt (24th percentile, per Synergy), which is surprising given their turnover concerns on offense. SMU does a good job defending the rim (42.3% allowed, 45th nationally), but has been susceptible to give up the three-point shot (33.5%, 169th).

The x-factor for SMU is 6-foot-9, 245 pound junior Markus Kennedy. Kennedy averaged 12 points and seven rebounds per game last season, but has been sidelined due to suspension for academic issues. Kennedy was originally suspended for the first semester, and SMU’s exams ended this week, but he was still not dressed for a Wednesday win over UIC. Will he be back in the lineup on Saturday? He could be, but the latest speculation is that Kennedy will not be available.

#SMU F Markus Kennedy is in street clothes for tonight's game as I was expecting. Don't expect him for UM either.

Nic Moore leads SMU in scoring at 14.3 points and five assists per game. Moore is only 5-foot-9 and 170 pounds, but the Indiana native is a terrific player. His turnover numbers are a bit high, but he does just about everything else well. He’s making 47% of his threes this season, has a top-100 assist rate and shoots an impressive 96% at the free throw line. Ball screens make up only 11% of SMU’s offense, but Moore accounts for almost all of that production and is a very efficient pick-and-roll scorer.

Moore leads SMU in three-point makes (20-41), but Keith Frazier, a 6-foot-5 guard from Dallas, leads the Mustangs in three-point attempts (18-47). 62% of Frazier’s field goal attempts are threes and he’s a career 39% long distance shooter. Frazier is coming off of an impressive 16 point, 10 rebound, three assist performance against Illinois Chicago.

Ben Moore wears #00 and averages 11 points, seven rebounds and three assists per game. The bulk of Moore’s offense comes cutting and finishing around the basket, and he’s a good offensive rebounder, but he only finishes at a 48% clip. Like many of the other four men that Michigan has already faced this season, Moore should be a difficult challenge for Kameron Chatman and Zak Irvin defensively at the four spot.

Yanick Moreira has replaced suspended post player Markus Kennedy as well as anyone could expect, averaging 12.4 points and seven rebounds in 24 minutes per game. Moreira is a dominant rebounder and shot blocker and the 6-foot-11, 220 pound senior makes 62% of his twos. Cannen Cunningham is SMU’s other primary big man off the bench. He’s averaging 7 points per game in 18 minutes of action and is known for his shot blocking ability around the basket.

KenPom projects a 63-60 Michigan victory with a 60% chance of Michigan moving to 7-4. There’s little doubt that SMU is playing better basketball right now (and the Mustangs could be especially dangerous if Kennedy makes his return), but the Wolverines can’t afford to drop another home game this early in the season.