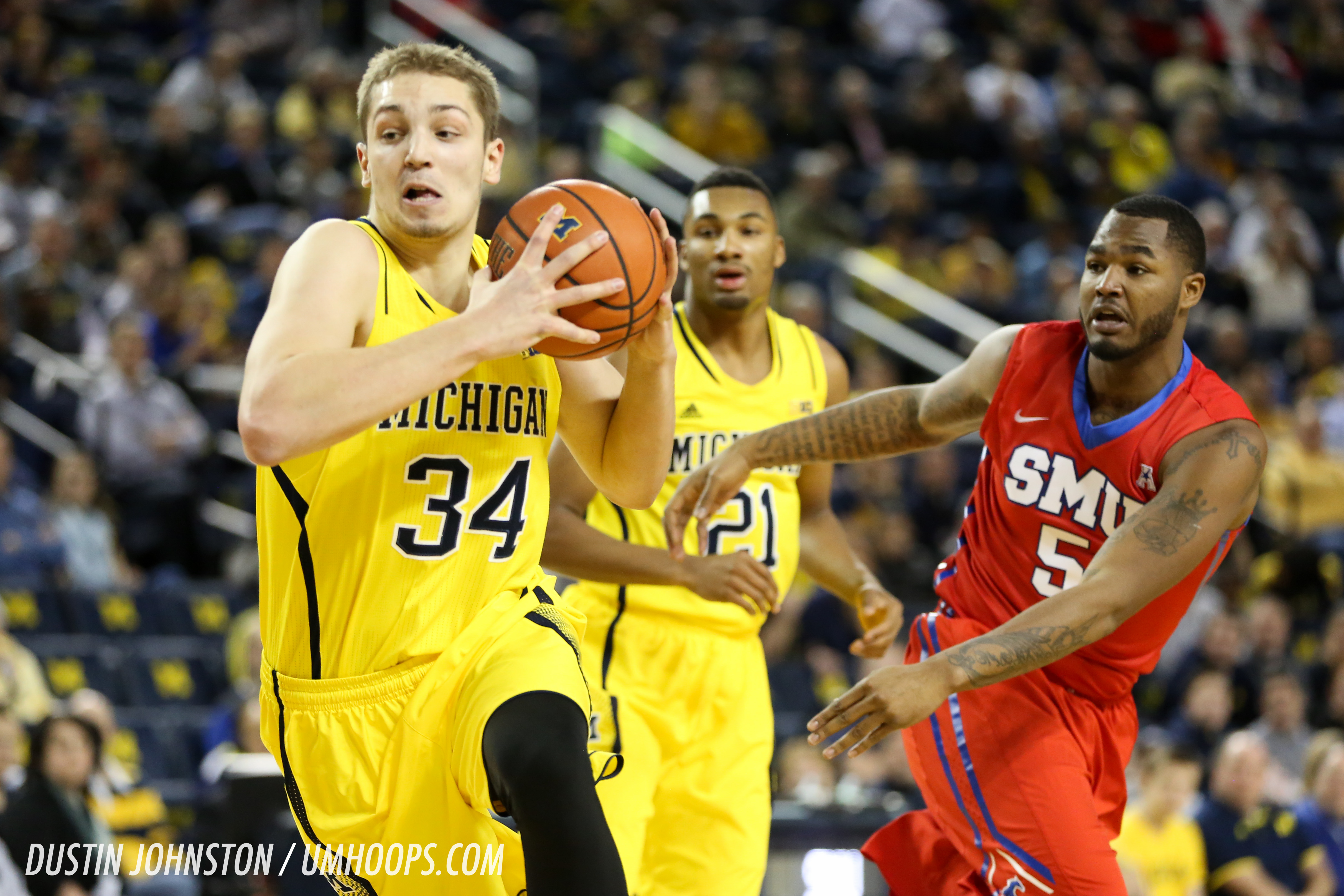 Mark Donnal finished with a career-best 13 points on 4-of-6 shooting in 14 minutes in a Wolverine loss to SMU and was one of the lone bright spots for a Michigan team that dropped its fourth consecutive game.

The problems facing the Michigan basketball team are numerous: The Wolverines aren’t hitting open looks, they’re struggling to establish an inside presence, they’re slow on defensive rotations and key players are injured.

“I think there’s small positives tonight just in what Mark Donnal did,” he said. “And that’s not only for him — that’s for others to grow in their confidence for him.

“But that’s what we need right now: We need to get a win and grow from that as well. But we’ll grow a lot from this loss. It is tough.”

That Donnal became the highlight of an otherwise mistake-prone performance was surprising in its own right. For the first time this year, the freshman center didn’t start, and he didn’t check in until 4:45 into the contest. By then, Ricky Doyle had already established himself with a strong offensive rebound and layup off the pick-and-roll.

It didn’t take long for Donnal to make a splash of his own, though. Ten seconds after he subbed in, Derrick Walton found the center open at the corner, and he didn’t hesitate to bury the three-pointer. He made another trey in garbage time and finished 2-for-3 from long range — a weapon Doyle can’t deliver.

“[Beilein] has built trust in me that I’m able to take those kind of shots,” Donnal said. “He has full confidence that I can make them.”

Donnal ended the afternoon with a career-best 13 points on 4-of-6 shooting in 14 minutes. Only Zak Irvin made more field goals for Michigan.

“I told [Donnal] before that game that we want him coming off the bench with a shooter’s mentality,” Beilein said. “He’s a very good shooter, and we have to use him more like that in the future.”

But the freshman’s biggest moment was a strong play inside that capped a quick 7-0 run midway through the second half. When Spike Albrecht missed a three-pointer, Donnal boxed out SMU’s Markus Kennedy to grab the board, made a strong layup through a foul and sank the ensuing free throw.

It was a powerful move Michigan simply hasn’t seen before from Donnal.

“I don’t know what the magic is,” Beilein said. “When you take a guy and take him out of the starting lineup, he comes back and he comes off the bench much more relaxed. So that’s a part of the reason that you make the change. The starters, sometimes, maybe they’re feeling too much.”

Donnal, though, said there wasn’t any different mindset coming off the bench rather than starting. Instead, it was a simple adjustment to playing the second five-minute block than the first. And given the Wolverines’ frequent rotation at center, it’s not such a big deal who starts anyway. (Donnal is averaging 13.8 minutes per game; Doyle is averaging 16.8.)

Still, Donnal’s nice day offensively can’t mask SMU’s 34 points in the paint to Michigan’s 10, SMU’s 37% offensive rebounding rate or Yanick Moreira’s 7-of-9 shooting day. More importantly, it doesn’t hide the reality of a 6-5 record and the season in a tailspin.

But as Beilein looked for positives Saturday afternoon, Donnal was a good place to start.