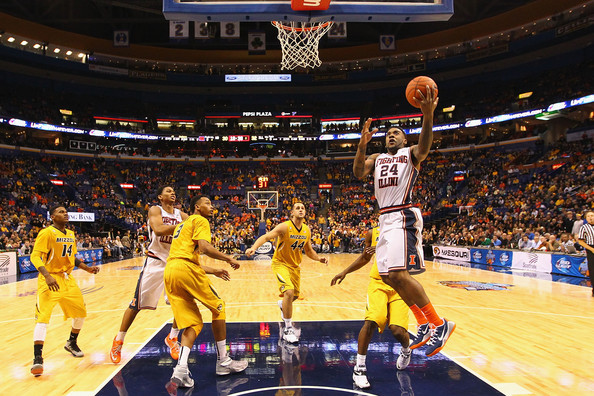 All eyes are expected to be on Jim Harbaugh when Michigan hosts Illinois on Tuesday, but this winter hoops matinee is also a pivotal game in Michigan’s season. After a disappointing non-conference campaign, Michigan has a fresh start and a blank record in Big Ten play. The Wolverines have their work cut out for them – double digit wins will be required to claim any shot at the NCAA tournament – but a bit of rest and a 0-0 record might be the only chance to turn around a disappointing season.

All eyes are expected to be on Jim Harbaugh when Michigan hosts Illinois on Tuesday, but this winter hoops matinee is also a pivotal game in Michigan’s season.

After a disappointing non-conference campaign, Michigan has a fresh start and a blank record in Big Ten play. The Wolverines have their work cut out for them – double digit wins will be required to claim any shot at the NCAA tournament – but a bit of rest and a 0-0 record might be the only chance to turn around a disappointing season.

Michigan tips off league play at 3:00 p.m. on Tuesday afternoon against a 10-3 Illinois team that boasts a quality win over Baylor along with losses to Villanova, Oregon and Miami FL on its resume.

The Illini had a strong finish to the 2013-14 season as they bounced back from a 3-10 Big Ten start to win five of their final seven games of the regular season and Big Ten Tournament  (with both late losses coming against Michigan). This year’s group has seen their ups and downs, but should still be able to compete for a NCAA tournament berth.

Offense has been the problem for John Groce’s club this season. The Illini have failed to score more than a point per possession against any high-major opponent this season (Missouri, Oregon, Baylor, Miami and Villanova), but have topped that mark in every game against a mid-major foe.

Similar to Michigan, the Illini have struggled to score when their jump shooting goes cold. Illinois failed to manage an eFG% over 46% in any of those poor offensive performances and doesn’t do much else offensively to distinguish itself. The Illini like to play fairly fast (adjusted tempo of 69 possessions per game) and only give the ball away on 14% of their offensive possessions — fourth best in Division I. But also similar to Michigan, the Illini make very little impact on the offensive glass or at the free throw line.

Defensively, Illinois is rated in the top-50 nationally in adjusted defensive efficiency. The Illini are ranked between 40th and 100th in eFG% defense, forced turnover rate, defensive rebounding and defensive free throw rate. While they might not have a single element to hold their hat on, the Illinois defense also doesn’t have many weaknesses. Illinois is undefeated when holding its opponents below a point per possession, but the three teams that beat Illinois (Villanova, Oregon and Miami) were all able to crack the Illini defense – averaging a combined 1.1 points per trip.

For the second consecutive season, Rayvonte Rice shredded non-conference competition. The worry for Illinois is that Rice did the exact same thing last season and then was woefully inefficient in conference play.

Rice’s numbers are through the roof through 12 games this season. He’s averaging 17.7 points and 6.5 rebounds per game, shooting 54% on twos and 47% on threes. He’s a high-level defensive rebounder, gets to the line and doesn’t turn it over.

Kendrick Nunn set the Big Ten on fire down the stretch last year with his three-point shooting and the 6-foot-3 sophomore is connecting on 44% of his triples this season. Nunn replaced Seton Hall transfer Aaron Cosby in the starting lineup in mid-December and the decision was overdue. Cosby is shooting just 27% on twos (10-37) and 33% on threes (22-67).

Big man Nnanna Egwu is one of the more underrated big men in the league. He’s capable scoring on the block and can even step out and knock down jumpers, in the mid-range and out to three-point range (37%). He’s a good shot blocker and offensive rebounder, but isn’t quite as strong of a defensive rebounder as you’d expect from a 6-foot-11, 250 pound senior.

Illinois utilizes an undersized power forward as 6-foot-6 Malcolm Hill starts at the position. Hill is shooting 55% on twos and 41% on threes (9-22) and has been very aggressive on the offensive glass. The Illini feature him occasionally in the ball screen game as a pick-and-pop option, but I would expect Michigan to switch that action with its matching small lineup.

5-foot-9 guard Ahmad Starks stepped in at the starting point guard spot after Tracy Abrams suffered a season ending injury this fall. Starks , a senior transfer from Oregon State, has good turnover and assist numbers, but only shoots 43% on twos and 31% on threes with over half of his attempts coming from long range.

Point guard Jaylon Tate, combo forward Leron Black and big man Maverick Morgan round out the Illini rotation. Tate has a team-best assist rate of 29.5%, but he also turns the ball over more often than any other rotation player and shoots just 38% on threes and 25% on twos. Morgan stands 6-foot-10, 250 pounds and is an effective finisher and shot blocker while Black – a top 50 incoming freshman – is Illinois’ best defensive rebounder and a 49% two-point shooter.

KenPom projects a 64-63 Michigan victory, giving the Wolverines a 54% chance of defending home court. This is the only game out Michigan’s next five that is a projected victory, so the time is now to create some confidence before heading on the road.