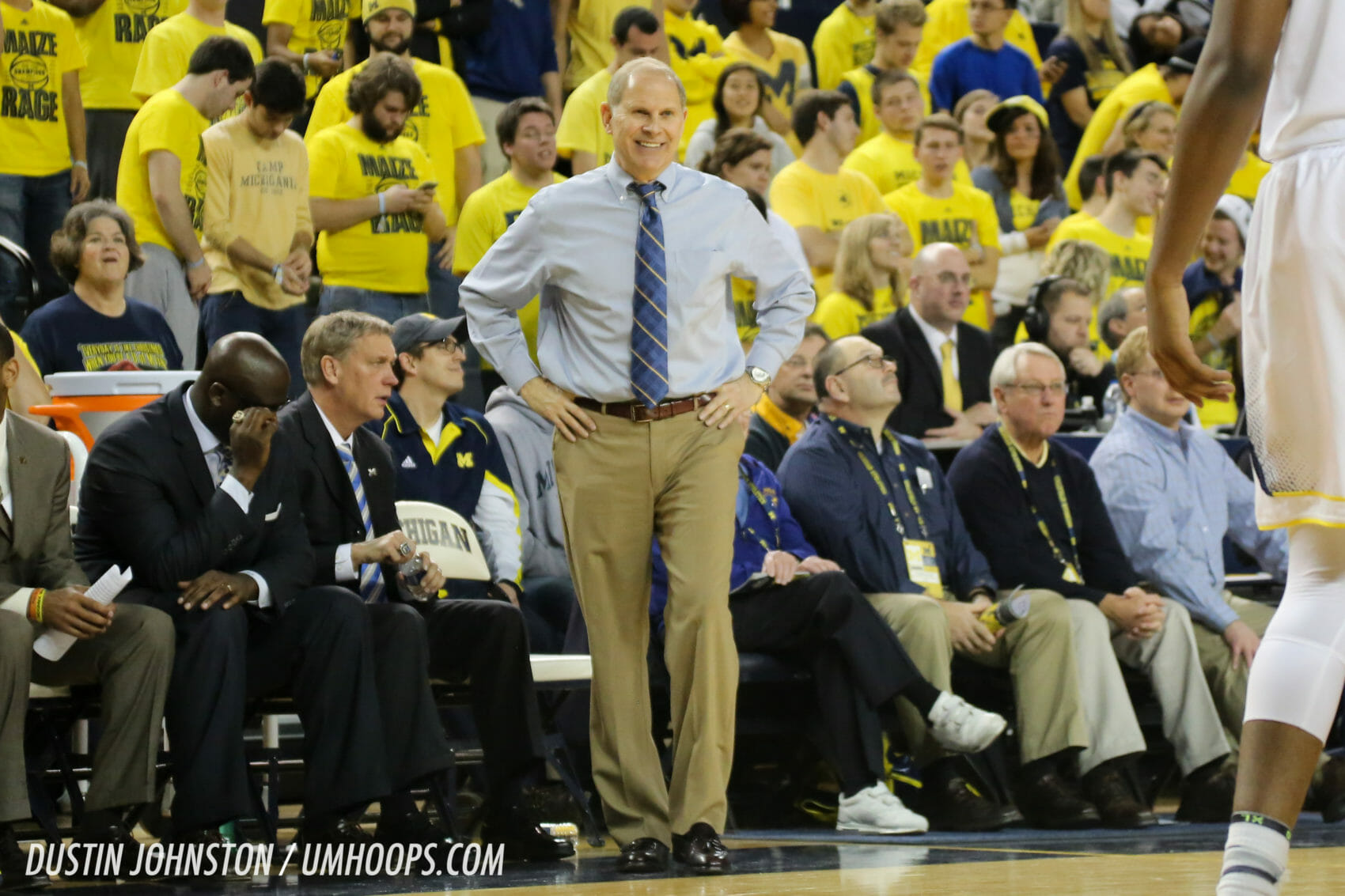 John Beilein explained he has a long laundry list of things Michigan needs to improve on because of how thin the line is between success and failure.
“I guess what stuck out is how fragile a team can be,” Beilein said. “I’ve tried to put things into perspective, of not just us, but basketball in general.”

The Big Ten season is upon us, which means fierce rivalries, consistently better competition and an opportunity for the Michigan basketball team to prove that it has improved from its 7-5 non-conference record.

And while there’s deserved excitement surrounding the football news in Ann Arbor, John Beilein knows his Wolverines have to stay focused themselves.

After all, Illinois comes to town Tuesday afternoon. And a loss to the Fighting Illini, in front of a sellout Crisler Center crowd, would be a tough start to Big Ten play for a program that hasn’t lost more than one Big Ten home game in any of the past three seasons.

“I think that there’s enough going on in my life just trying to beat Illinois right now to even worry about that,” Beilein said when asked about the football coaching search.

But Tuesday’s game brings a special set of on- and off-court challenges. Not only will Michigan be tasked with stopping Rayvonte Rice, Illinois’ dynamic wing scorer, but it will also be coming off an eight-day break since its last game.

And in that time, Beilein has done some reflecting. He explained he has a long laundry list of things Michigan needs to improve on — as he said that, he held his arms about two feet apart — because of how thin the line is between success and failure.

“I guess what stuck out is how fragile a team can be,” Beilein said. “I’ve tried to put things into perspective, of not just us, but basketball in general. I’ve never seen so many guarantee games go in the favor of [the underdog]. … It puts things into perspective how veteran teams — no matter what level they’re at — can beat anybody on any night.”

The break was a welcome respite for the Wolverines, which have several players nursing injuries. This week, Caris LeVert, Zak Irvin, Derrick Walton and Spike Albrecht were rested extensively in practice both to help them recover and to give freshmen more chances to improve.

“Six possessions — three on offense, three on defense — can change a season”

The hope, Beilein said, is that, through healthy veterans and more experienced newcomers, Michigan will execute well on a handful more possessions per game. In his opinion, that could be enough to change the course of an entire season.

Over the last three seasons, Michigan has won more of those critical possessions than it has lost in Big Ten action. The Wolverines have earned two Big Ten crowns and won 40 of 54 conference games over the past two seasons. Although they’ve struggled in non-conference play, they are almost certain to have a target on their back — especially against a team like Illinois, that they beat by 31 points on its home floor to clinch the Big Ten Championship last season.

Ricky Doyle and Irvin met with media Monday afternoon, and they both discussed individual improvements that could ensure the Wolverines get those extra positive possessions. Irvin has been working on fixing the form on his jump shot, while Doyle talked about growing more comfortable in Beilein’s system.

All of that will be tested Tuesday against the Illini. KenPom predicts just a one-point win for the Wolverines, giving them a 54% chance of emerging victorious at Crisler. Moving to 8-5, and more importantly 1-0 in the Big Ten, could hinge largely on how Michigan handles the backcourt duo of Rice — who is averaging 17.7 points and 6.5 rebounds per game — and Kendrick Nunn.

“The thing with [Rice] last year is that he wasn’t a downtown sticker,” Beilein said. “Now he is. He gets to the foul line five times a game. Really a tough matchup. Between all our perimeters, we’re going to do a good job of staying in front of him. He’s seeing the floor well. And that may have a lot to do with the new point guard [Nunn] as well.

“They’ll post him up. He can shoot from three. The ball is going to be in his hands, probably, at winning time.”

Of course, Beilein would likely prefer it if there were no “winning time” on Tuesday afternoon and his team can figure out a way to earn a comfortable victory.

But the head coach has been around long enough to realize that those critical late possessions could determine Michigan’s fate once again, he just hopes the Wolverines have improved enough to have the result fall their way.