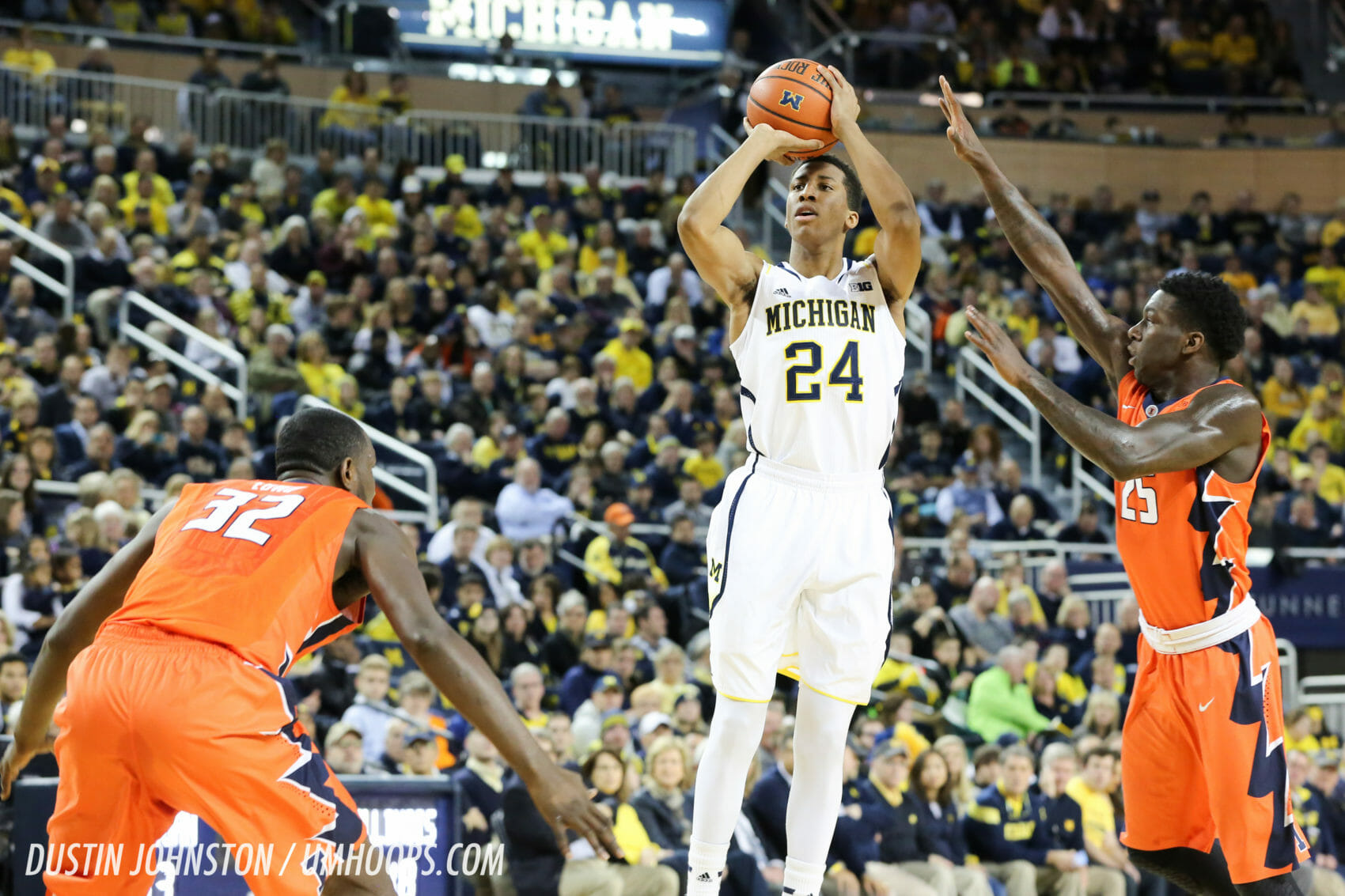 On an afternoon in which Jim Harbaugh was introduced to a sellout Crisler Center crowd, a little-known freshman backup stole the show. Aubrey Dawkins sank six three-pointers as his team-high 20 points paced the Michigan basketball team to a crucial 73-65 win over Illinois in both teams’ Big Ten opener.

On an afternoon in which Jim Harbaugh was introduced to a sellout Crisler Center crowd, a little-known freshman backup stole the show.

Aubrey Dawkins sank six three-pointers as his team-high 20 points paced the Michigan basketball team to a crucial 73-65 win over Illinois in both teams’ Big Ten opener.

Prior to Tuesday’s contest, Dawkins had scored 15 points this season — total. And though John Groce said the forward was part of their scouting report, the Illinois coach certainly didn’t anticipate Dawkins’ stellar performance.

“At the end of the day, I look at the stat sheet, and it’s exactly what I expected — except for one thing,” Groce said. “That’s the young man who shot 11 total threes on the season coming in going 6-for-7. Give him credit.

“He got on quite a roll, and I thought he was quite the difference in the game.”

After the forward hit his final trey of the night with 1:56 remaining in overtime to put the Wolverines up by four, the Maize Rage serenaded him with chants of “Aub-rey Daw-kins.” And they roared louder moments later when Michigan forced an airball and sealed the win on a Caris LeVert jumper.

But until midway through the second half, it didn’t seem as if the Wolverines would be in any position to win their Big Ten opener. When the first half ended, LeVert was the team’s leading scorer with 11 points. No one else had more than four.

“We put Aubrey in because we said, ‘We just gotta get another guy in who can shoot the ball,’ ” said Michigan coach John Beilein.

Dawkins’ teammates, many of whom are known for their three-point shooting stroke, just couldn’t find their range. While Dawkins was 6-of-7 from long distance, the rest of Michigan’s roster shot just 19% (4-of-21) from three-point range.

In the second half and overtime, Dawkins provided major production off the bench with 17 points. He played 24 minutes on the afternoon — by far the most of the year.

“Few people can do it really well,” Beilein said. “That was very encouraging from Aubrey today. I think we’ll see him more in that role moving forward.”

Facing a 12-point deficit seven minutes into the second half, Dawkins got to work. He took a feed from Spike Albrecht and drained a three, then made Michigan’s next bucket two minutes later from beyond the arc.

He did that three more times before the game had ended, catching and shooting over defenders as he willed the Wolverines to victory.

“You don’t have warmup time coming off the bench,” Dawkins said. “You gotta be ready to make your minutes count.”

With six minutes left in regulation, his three-pointer off a Zak Irvin assist brought Michigan within three and forced Illinois to call timeout.

And early in the overtime period, Dawkins drew an important foul on Nnanna Egwu — the Illini center’s fifth of the day — and made both free throws. And just a couple minutes later, he sank the three that put Michigan up four. The Illini never cut that deficit.

“I think I’m starting to figure it out,” Dawkins said, later adding that “the atmosphere in the gym was crazy.”

And though there was plenty of celebration for Harbaugh, the capacity crowd ignited most in the second half for Dawkins and his contributions to the overtime win.