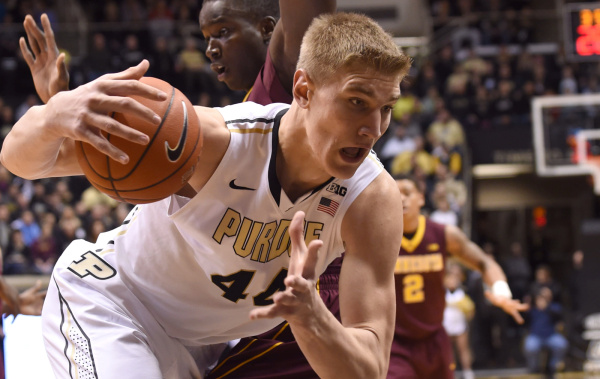 Michigan heads to West Lafayette tomorrow for its first Big Ten road game of the season (Saturday, 2:15 p.m.). Purdue should provide a difficult matchup for the Wolverines as the Boilermakers are more reliant on post-up offense than any other team in the Big Ten.

Michigan heads to West Lafayette tomorrow for its first Big Ten road game of the season.

The Wolverines have won their last three games at Purdue, but all of them have come with some degree of consternation. There was Glenn Robinson III’s game winner last year, a 12-point second half comeback in 2013 and a one possession victory in 2012. Michigan deserves credit for figuring out how to win games at Mackey Arena, but the Boilermakers have to feel like they are due for a win over the Wolverines.

Both teams enter Saturday’s game with five non-conference losses and are coming off of close, but necessary comeback wins in their Big Ten home openers. Michigan managed to take down Illinois while Purdue knocked off Minnesota, coming back from nine points down in the final 10 minutes.

Purdue doesn’t have the best offense that Michigan will face this year, but they present a troubling matchup concern for John Beilein and his staff.

Purdue throws the ball into post almost three times as often as the average Big Ten team and Michigan has the worst post defense in the conference. The following two charts illustrate Michigan’s poor post defense and Purdue’s obscene reliance on post-up basketball.

Here are the conference’s post-up offenses. You can see that Purdue is a hair behind teams like Minnesota, Wisconsin and Ohio State in terms of efficiency, but the Boilers have significantly more post-up possessions than anyone in the league.

Defensively, Michigan is the conference’s worst against post-up offense. The Wolverines are not only surrendering the most points per post-up, but teams have also figured out the weakness which means the Wolverines face more post-ups than anyone else in the conference.

For comparison, Michigan gave up .73 points per post-up last season and is surrendering 1.04 points per post up this season as opponents shoot 56% when they get the ball on the low block.

The Boilermakers will throw the ball to AJ Hammons and Isaac Haas as many times as possible and their 7-footers know what to do when they catch the ball on the low block.

The rest of Purdue’s offensive profile is similarly interior-oriented. The Boilers shoot 51.4% on twos and while they shoot 34.6% on triples, they only attempt 30.8% of their shots from outside. The strength of Purdue’s offensive attack is its ability to get on the offensive glass and it grabs 37.8% of its misses. Purdue attempts 43 free throws per 100 field goal attempts and the roster is loaded with guards, bigs and wings that have the ability to get to the charity stripe.

While the offense checks in just inside of the KenPom top-50, Purdue’s defense has shown some flaws and is ranked 142nd nationally.  The Boilermakers aren’t ranked better than 100th in any of the four factors measures. Purdue does a great job defending the rim, allowing just a 42.4% 2-point shooting percentage and blocking 15.7% of its opponents shots, but has been vulnerable beyond the three-point line. Boilermaker opponents are shooting 38.5% (309th nationally) from three-point range and Minnesota made 50% of its threes against Purdue on Wednesday.

7-foot-2, 292 pound, freshman Isaac Haas stepped onto campus and started doing things that Purdue fans have waited for three years to see from junior big man A.J. Hammons. Hammons is still one of the truly elite shot blockers in the country (ranked 6th nationally in block percentage), but his offensive efficiency has regressed each season. Hammons is shooting just 49% on twos this season and for some reason he’s attempted seven threes, missing all of them.

Haas is the more efficient post scorer and shoots 62% on twos. He draws 8.7 fouls per 40 minutes, the 2nd highest rate in the country according to KenPom.com. Like Hammons, Haas is a dominant rebounder on both ends and is also a very good shot blocker. The Achilles’ heel for both big men is making free throws, Haas shoots just 55% at the line and Hammons shoots 63%.

Michigan fans will remember the name Vince Edwards. Michigan had offered the Ohio native a scholarship and was entrenched in his recruitment before he eventually ended up choosing Purdue. Edwards leads Purdue in minutes and rebounds per game with averages of 26.2 minutes, 10.2 points, 5.9 rebounds and 2.3 assists. The 6-foot-7, 220 pound wing has been lethally efficient — shooting 65% on twos and 40% on threes — and is also an aggressive offensive rebounder.

Kendall Stephens is the Purdue three-point threat to track. Stephens shoots 44% on threes with two-thirds of his attempts originating from long distance and he’s making only 25% of his twos.  Stephens has accounted for just under half of Purdue’s made threes on the season and he’s the only player that you can’t double-down off of against Purdue’s bigs or lose in any sort of zone look.

Rapheal Davis is a 6-foot-5 slasher with a lofty free throw rate (67 FTA per 100 FGA) and shoots 59% on twos. He’s averaging 10 points per game and while he can accomplish quite a bit attacking the basket, he’s not a three-point threat (2-of-14 on the year).

The glaring hole in Purdue’s lineup is at the point guard position. Colorado State transfer Jon Octeus starts there and sophomore Bryson Scott and freshman point guard P.J. Thompson will provide relief.  None of the three have particularly impressive assist or turnover numbers and Octeus has the most reliable three-point shot of the bunch, but prefers to score inside the arc.

As would be expected given Purdue’s questionable guard play, the Boilers are not a good pick and roll team. Just 5.4% of Purdue’s offensive possessions are ball screens and they’ve managed just .561 points per possession — a figure that grades out among the worst in Division I.

KenPom projects a 66-63 Purdue win and gives Michigan a 36% chance at escaping Mackey Arena with an upset.