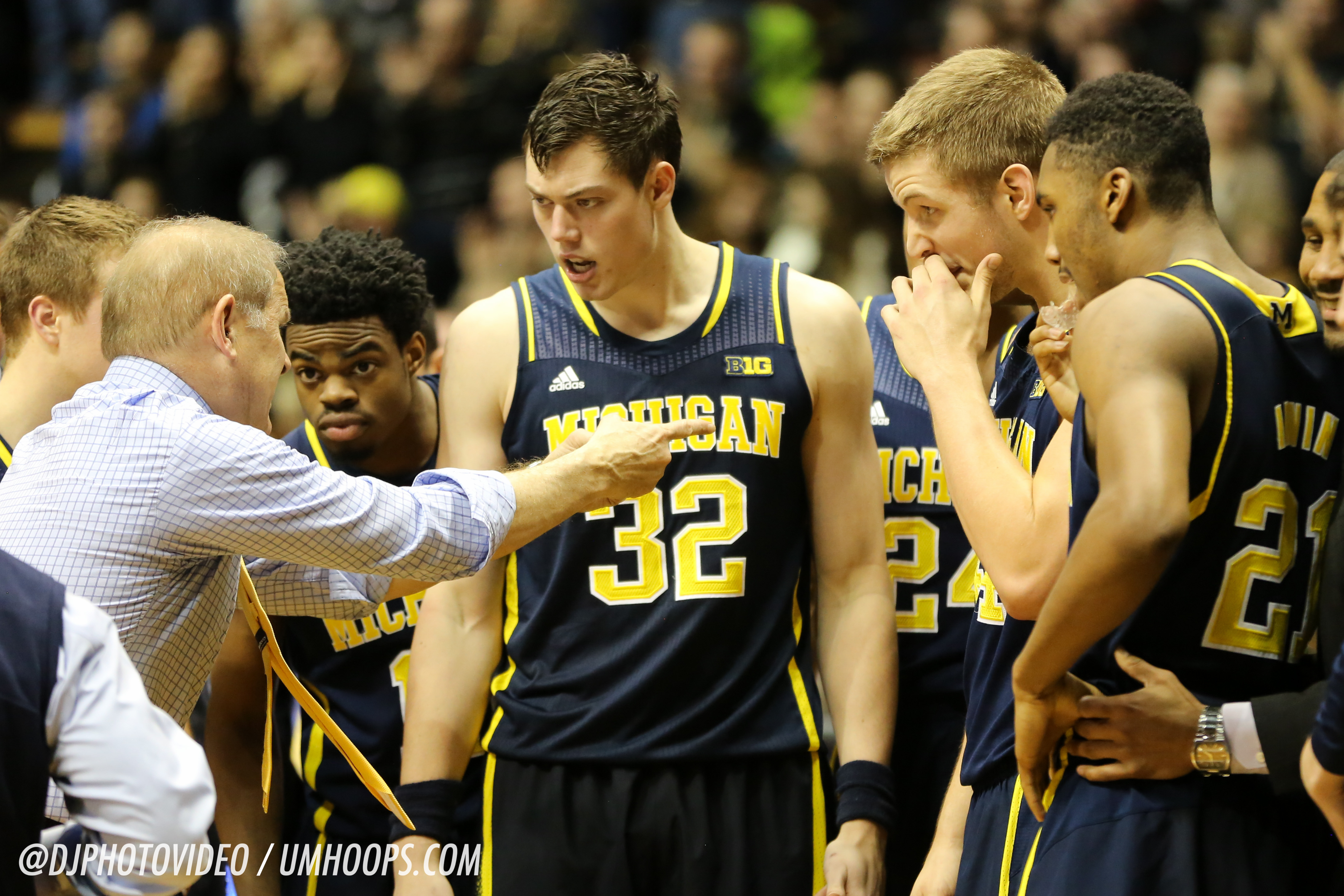 Michigan’s offense continued to struggle on Saturday as it only managed to score 18 points in the final 20 minutes of its loss at Purdue. Now 8-6 overall with a 1-1 conference record, this team is running out of time to get things figured out. Michigan’s losses against Arizona, Purdue, SMU and Eastern Michigan were four of its five worst offensive performances since November of 2010. Here’s a statistical look at a few things that are wrong with the Wolverine offense thus far.

Michigan’s offense continued to struggle on Saturday as it only managed to score 18 points in the final 20 minutes of its loss at Purdue.

The Wolverines – who were 15-1 in January Big Ten games over the past two seasons – made just two shots in the first 14 minutes of the second half and never looked comfortable on offense.

Now 8-6 overall with a 1-1 conference record, this team is running out of time to get things figured out. Michigan’s losses against Arizona, Purdue, SMU and Eastern Michigan were four of its five worst offensive performances since November of 2010.

The Wolverines have set the bar high as one of the country’s most dominant offensive programs over that stretch. They set the record for KenPom adjusted offensive efficiency in back-to-back seasons and haven’t been ranked worse than 35th since 2009-10. Now sitting at 128th, it’s clear that something is wrong.

Graphing Michigan’s offensive output over the past five seasons – using a three game rolling average – we can see just how bad things have become since mid-December in Ann Arbor. The Wolverine offense hasn’t just regressed from ‘elite’ to ‘average’, it has fallen off a cliff.

The natural question is what happened? Michigan isn’t running different sets or trying to play a different style of basketball. John Beilein didn’t forget how to coach overnight after earning praise as an offensive wizard for decades.

At the highest level, this Michigan team just doesn’t have the talent that previous groups had. Beilein’s last three teams have all had multiple pros and this group has one. Early entry has finally caught up to John Beilein after his program lost five players to the NBA over the past two seasons.

And while that’s the diagnosis at a macro level, here’s a closer look at just what is going on with Michigan’s offense.

For eight games, Michigan’s shot breakdown was 33-33-33 between rim shots, mid-range shots and threes. Over the past six games that split has shifted to 25-25-50. Overall, Michigan’s eFG% has dropped from 54% to 44% in the two splits.

As Michigan’s three-point volume has increased, its accuracy has decreased. The Wolverines were average or better from every three-point zone throughout the first eight games, but now are only above-average from the right wing.

While it’s easy to point to the weak three-point shooting, the deeper problem might be the below-average shooting at the rim. Michigan was a bad finishing team early in the season, but as the season has progressed, teams are adjusting and completely eliminating that interior shot — daring the Wolverines to beat them from the outside. Against Purdue, Michigan shot just 17% at the rim in the second half as it bricked its way to a frustrating defeat.

Searching for a finisher

Watching Purdue’s Vince Edwards, a former Michigan recruiting target, cut along the backline of Michigan defense was a stern reminder of just what Michigan’s offense is missing. The Wolverines don’t have someone that can fill open holes near the basket and then finish above the rim.

Last year, Jordan Morgan and Glenn Robinson III were a combined 73% at the rim and took 241 shots there. As a team, the Wolverines shot 65% at the rim and just over a third of their attempts were in that zone. This year? Of the 100 high-major teams tracked by ShotAnalytics, only Houston has attempted a lower percentage of its shots at the rim and the Wolverines are shooting just 56% on those attempts – well below average.

Michigan’s best option to finish around the rim this year has been Ricky Doyle. He’s shooting 73% at the rim and grades out favorably in Synergy Sports’ metrics for cutting to the rim and finishing ball screens.

Doyle is still learning – especially on the defensive end of the floor – and trying to improve his physical fitness, but Michigan’s ability to get him involved in games likely will determine its offensive fate.

In Michigan’s last five wins (dating back to Oregon in November 24th), Doyle is 25 of 32 from the floor (6.2 FGA/game) and he’s reached double figures in each of those wins. In Michigan’s six losses over the same time span, Doyle is averaging just 4.5 points and 2.8 FGA per game.

It’s tough to force feed Doyle the ball because his opportunities are generally what John Beilein has referred to as ‘residual action’, shot attempts that are the result of the offense working as designed. But it’s clear that when Doyle is involved, Michigan’s offense has a much greater chance for success.

This year, LeVert doesn’t have much support. The Wolverines badly need a creator to put alongside LeVert – someone that can score or distribute off of a ball screen, or take their man off the bounce. There’s no consistent option on the Michigan roster which means that opposing defenses can focus their entire approach around LeVert. When Michigan had Trey Burke, that approach mostly worked. But LeVert isn’t Trey Burke, and not many people are.

Those discrepancies are magnified because 44% of LeVert’s shots this season have been off the dribble jumpers compared to 27% last season.

LeVert is shooting more off the dribble jumpers because he can’t get to the rim and there’s nothing else happening. Someone has to shoot the ball and the result is a bunch of awkward, off balance shots that have little to no chance of going in.

The question is who – if anyone – is capable of stepping up as an alternate creator and start to take some pressure off of LeVert.

I’ve heard many people point to Zak Irvin to fill some of that role, but that’s never been a major part of his game. Irvin is a shooter first and foremost and Michigan needs him to do that well before worrying about trying to create offense. He’s scored 2 points in 9 isolation possessions. He’s scored 16 points on 22 ball screens, but he shoots an off the dribble jumper on 81% of his ball screens.

His sprained toe injury, suffered late in the game against Villanova has undoubtedly affected him. Walton has struggled to make shots around the basket, started forcing more long jumpers and appears to have lost confidence in both elements of his game.

While Walton was never the focus of Michigan’s offense last season, he showed signs that he’d be capable of taking the leap. He knocked down open shots, played well in transition and made countless clutch plays.

There’s no easy fix for this Michigan team. It lacks depth and confidence and there aren’t dozens of additional options waiting in the wings. The Wolverines need Derrick Walton to emerge as a creator, which can hopefully continue to get Ricky Doyle more involved on the inside. Aubrey Dawkins is the x-factor and option for John Beilein to mix things up, but overall the Wolverines will go as far as their core can take them offensively.