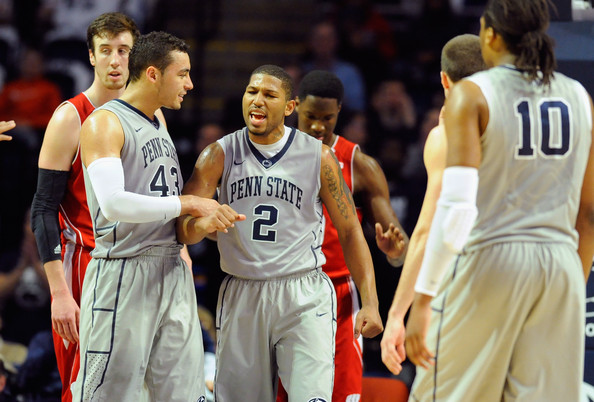 Three years ago, the Wolverines beat Penn State and managed to back into a share of their first Big Ten title in decades. A year later, Michigan suffered an embarrassing loss to a Penn State team that entered the game 0-14 in Big Ten play – that close to rock bottom for a slumping Wolverine team – but then somehow bounced back and made a run to the Final Four.

This game won’t pack nearly the same sort of drama, but will be a battle of two teams that desperately need a win to right the ship in early January.

Penn State opened Big Ten play on the road, losing at Wisconsin (89-72) and Rutgers (50-46), and will be looking to bounce back at home after a 12-1 non-conference season. The Nittany Lions’ 12-1 record is masked by the fact that they only played one team in Ken Pomeroy’s top 100 (a win over George Washington)

Not much about Penn State’s statistical profile jumps off the page. The Nittany Lions are ranked 114th in adjusted offensive efficiency and 80th in adjusted defensive efficiency – numbers that are very similar to Michigan’s 128th off. and 75th def. rankings — and are only ranked in the top-100 in one four factors measure on either side of the ball (43.8 defensive eFG%, 39th).

Offensively, Penn State is average at just about everything. The Nittany Lions are better shooting the ball inside the arc (49.8%) than outside (31.9%) and attempt around 36% of their field goals from outside the arc. PSU isn’t a great offensive rebounding team, but it does get to the line fairly often — attempting 40 free throws per 100 field goal attempts.

Over a quarter of Penn State’s offensive possessions are ball screens and they score .91 points per ball screen (including passes). Another 13% are isolation sets, where again the Nittany Lions grade out favorably. This is a team that, much like Michigan, relies on DJ Newbill to breakdown the defense and try to create something for himself or his teammates.

Defensively, Penn State’s field goal defense is impressive. Nittany Lion opponents are shooting just 42.8% on twos (42nd) and 30.6% on threes (71st) this season and only three teams (Charlotte, Bucknell and Wisconsin) have managed an eG% above 50%.  Fouling has been Penn State’s Achilles’ heel. PSU is ranked 237th in free throw rate allowed and in all three of its losses, it has surrendered a free throw rate over 50% four times — including its three losses.

DJ Newbill is one of the best one-on-one players in the conference and his career at Penn State has been impressive to watch. He was immediately thrown into a tough situation during his first year at Penn State as Tim Frazier suffered a season-ending injury, but has improved his efficiency in each season since that year. This year, Newbill is shooting 49% on twos, 39% on threes, and attempting 46 free throws per 100 field goal attempts. His offensive rating of 114 is impressive for a player using 29% of available possessions and 92% of available minutes.

Freshman guard Shep Garner has shown promise, averaging 9.7 points and 2.2 assists per game. Garner is Penn State’s secondary ball screen and isolation option and he’s shooting an impressive 55% on twos and 36% on threes.

6-foot-6 wing Brandon Taylor attempts over half of his shots from three-point range, but connects at just a 29% clip. Taylor is a below-average shooter at every spot around the three-point line other than the left corner, where he shoots 58%. Ross Travis plays stretch four minutes for the Nittany Lions and is the best offensive and defensive rebounder on the roster. Travis isn’t the most efficient or highest usage player on Penn State’s roster, but he still should provide a physical challenge for Kameron Chatman and Zak Irvin.

Geno Thorpe is at his best in transition and boasts a free throw rate of 74 FTA per 100 FGAs. The 6-foot-3 sophomore is still turnover prone and shoots just 48% on twos and 26% on threes.

Like Thorpe, John Johnson  is getting to the free throw line often, but doesn’t have great shooting numbers. The 6-foot-1 guard who played his freshman year at Pitt is shooting 49% on twos and 33% on threes.

Jordan Dickerson stepped into the starting lineup in December, but has only played more than 20 minutes once. The 7-foot-1 big man is a 50% two-point shooter and a plus shot blocker and defensive rebounder, but not a consistent back-to-the-basket scorer. Donovon Jack was the original starter at the five spot and is actually the better post-up scorer, but not quite

This is a chance for Michigan to escape with a 1-1 record on the road and setup a key home game against Minnesota. The Nittany Lions also need a win and enter the game as three-point favorites according to Ken Pomeroy, who gives Michigan just a 34% chance of the upset.